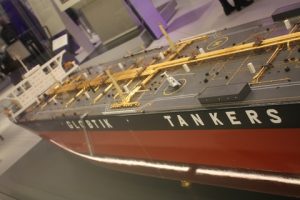 Once causing a sensation as the world’s largest ship, the Globtik Tokyo is back in the public gaze.

A model donated by Indian-born shipping entrepreneur Ravi Tikoo to the Science Museum in London, is a feature of the new Mathematics Gallery at the Exhibition Road institution. The miniature – a rather large miniature – of the ultra large crude carrier is a dominant part of the Trade and Travel section.

Known as Mathematics: The Winton Gallery, the room houses artefacts and models that highlight the central role of mathematical practice in daily life, trade and commerce, science, technology and engineering. Maths has revolutionised understanding and applications in all the spheres of human activity. 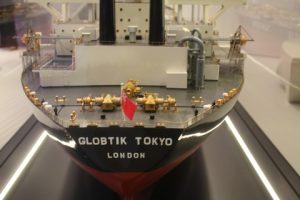 One of the messages of the gallery focuses on the degree to which brilliant mathematicians have solved problems and refined techniques to enable commercial and naval shipping to plough the seas safely and efficiently.

Mr Tikoo presented the model of one of his proudest achievements, the Globtik Tokyo, to the museum some years ago, but in recent times it has been kept in storage in Swindon and taken out only for special exhibitions.  Now the model has a permanent place in the new gallery, which was designed by Zaha Hadid Architects. 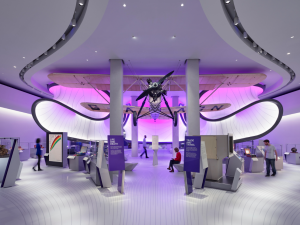 The model, still in perfect condition, was crafted by the Japanese shipbuilders, Ishikawajima Harima Heavy Industries of Kure, later known as IHI Corp. The tanker was one of a series of three built to pick up cargoes of crude oil from the Middle East Gulf for Japan. When completed in 1973 it was the largest ship on the seas with a length of 378.85 m and 483,684 dwt. Shortly afterwards the sister ship, the Globtik London, pipped the Globtik Tokyo by 276 tonnes. Both were flagged to the UK until sold in 1979.

The Globtik Tokyo made more than shipping history, being described by The New Scientist in 1972 as “the largest moving object ever built,” and the magazine put the cost at £19m. The two Globtik ships were sold for demolition, the Globtik Londonin 1985 and the Globtik Tokyo the following year. The third and largest ship in the class was the 484276 dwt Nissei Maru for Tokyo Tankers, and was scrapped in 2003. 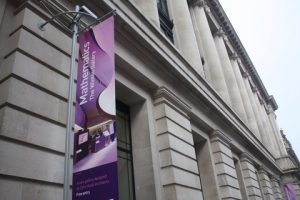 What has this to do with mathematics? The gallery’s summary emphasises that the shape of a ship’s hull is crucial in keeping costs down. This helped the economics of giant tankers especially. Experiments by mathematicians and engineers in the 1860s had shown that a bulbous bow produced less resistance at high speeds than the sharper bows favoured for large ships at the time.

Mr Tikoo gained a reputation as a brilliant mathematician himself, working out complicated nautical posers in his head. He had studied maths at Punjab University before joining the Indian Navy.

The Globtik Tokyo was powered by 45,000 hp steam turbines to a single shaft, and was said to have a turning circle shorter than three times its length. 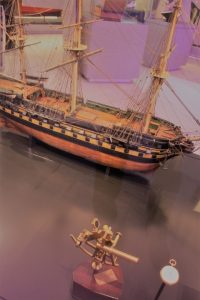 The shipowner’s motto was clearly “think big,” although several of his projects failed to take off.  One such was in 1977 when he signed a letter of intent for three nuclear‐powered ships with Tenneco Inc’s Newport News Shipbuilding & Dry Dock Co. In 1979 he proposed a fleet of very large crude carriers to move Alaskan oil through the Northwest Passage to the US east coast; and the following decade unsuccessfully appealed to the UK government to grant $170m subsidies for what would have been at 160,000 gt and with accommodation for 3,000 passengers the world’s largest cruise ship, to be built at Harland & Wolff and named the Ultimate Dream.  He was clearly a decade or two ahead of his time with these proposed ventures.

Close to the Globtik Tokyo representation in the gallery is a reminder of another maritime era – a model of an East Indiaman from around 1809 in a glass case together with a marine sextant and pocket chronometer from the 1790s. One solution to the problem of navigation lay in observation of the moon and stars and in mathematical calculations.

New technologies such as satellite navigation make the job easier these days, but by relying on machines we risk losing centuries of practice in navigating from basic mathematical principles, say the curators. They pay tribute to the British mathematician turned engineer and naval architect William Froude who combined theory with practical experiments to lay the foundation for modern studies of water flow around ships. 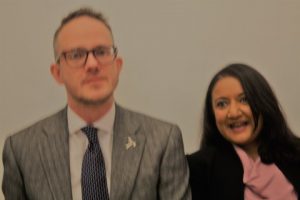 “It is easy to forget the importance of modern shipping in our daily lives,” the gallery remarks, reflecting a complaint often aired by the maritime industry.

Forgotten in another sense these days are the great floods which in 1953 hit Belgium, the Netherlands and the UK at a cost of more than 2,500 lives. Lessons from the North Sea tidal surge led to intensification of ocean studies, and equipment supporting such research is on display in the mathematics gallery, after being moved intact from a scientist’s back garden in the suburbs.

Many other fascinating exhibits include a Handley Page aeroplane built in 1929 which embodied new aerodynamic techniques, a Royal Mint cabinet of foreign weights from 1818, and an Enigma code machine from1934, designed to resist the most advanced mathematical techniques for code breaking during World War II. 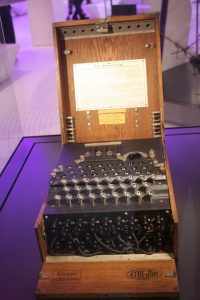 The entire gallery design is said to be inspired by the Handley Page in that it is related to equations of dynamics used in the aviation industry. The layout and lines of the gallery represent the air that would have flowed around the historic aircraft in flight.

This is the first permanent public museum exhibition designed by Zaha Hadid Architects and the firm’s first project to open in the UK since the sudden death of Dame Zaha Hadid in March 2016. Born in Baghdad in 1950, Dame Zaha became interested in geometry while studying mathematics at the American University in Beirut, before studying architecture at the Architectural Association in London. She established her practice in London in 1979.

The Science Museum said of her: “Mathematics and geometry have a strong connection with architecture and she continued to examine these relationships throughout each of her projects; with mathematics always central to her work. As Dame Zaha said, ‘When I was growing up in Iraq, math was an everyday part of life. We would play with math problems just as we would play with pens and paper to draw – math was like sketching.’”

Curator Dr David Rooney said: “At its heart this gallery reveals a rich cultural story of human endeavour that has helped transform the world over the last four hundred years.  Mathematical practice underpins so many aspects of our lives and work, and we hope that bringing together these remarkable stories, people and exhibits will inspire visitors to think about the role of mathematics in a new light.” 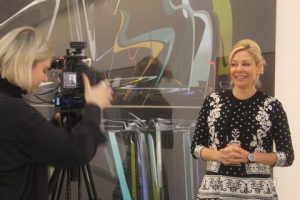 Mathematics: The Winton Gallery is free to visit and is open daily. The gallery has been made possible through a donation from long-standing supporters of science, David and Claudia Harding. Mr Harding is founder and chief executive of Winton Capital Management. Principal sponsor is Samsung, MathWorks is major sponsor, and additional support has come from Adrian and Jacqui Beecroft, Iain and Jane Bratchie, the Keniston-Cooper Charitable Trust, Dr Martin Schoernig, Steve Mobbs and Pauline Thomas.

A short distance from the Science Museum, in Kensington Gardens, the Serpentine Sackler Gallery – renovated and extended by the architectural practice in 2013 – has opened an exhibition of paintings and drawings from the early career of Dame Zaha. The exhibition was conceived with her participation, and according to the gallery reveals her “as an artist with drawing at the very heart of her work.”

The gallery cites a 2007 commentary by Dame Zaha which includes the sentence: “My work first engaged with the early Russian avant-garde; in particular with the work of Kasimir Malevich – he was an early influence for me as a representative of the modern avant-garde intersection between art and design.”

The works are bold, with dramatic use of colour, and it is hard to believe that they were executed long before digital processes and software became a commonplace of daily commercial and private life.

Exhibition partner is Swarovski, which designs and creates high-quality crystal products.  Nadja Swarovski, a member of the Swarovski executive board, said: “Swarovski was honoured to collaborate with Zaha for over a decade, creating an incredible body of work which ranged from lighting installations to sculpture, jewellery and home décor.  Her vision always pushed us outside our comfort zone, and the results were breath-taking.”

Hans Ulrich Oberst, artistic director of the gallery, drew particular attention to Dame Zaha’s dictum: “I think there should be no end to experimentation.”

Is that the same model of the Tokyo that was on display in the Transport Museum in Tokyo?