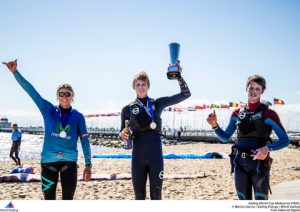 Three fast, furious and fantastic Foiling Kite races brought six of the 11 events on show at the Sailing World Cup Melbourne presented by Land Rover to a close in Australia’s sporting capital.

The 49er, 49erFX, Men’s and Women’s RS:X, Nacra 17 and Formula Kite finished their week of competition with Medal Races on the Stadium course in front of the St Kilda Sailing Precinct in a mixed day of breeze.

Last to race on Saturday, the foiling kiteboarders had the best of the conditions, a 12-knot breeze and beautiful afternoon sunshine. Those before them had a tougher time, racing in 6-7 knots of shifting breeze.

Oliver Bridge (GBR) took a 14-point lead into the three single-point non-discardable kite Medal Races however, in the first race things did not quite go to plan, “I wasn’t at my best in the upwind and I caught something at the second windward mark and just hit the deck. Something was stuck on my foil and I couldn’t get started again. It was quite annoying but I managed to catch up a couple of places.”

Bridge worked his way up to fifth and a top finish in the second race would confirm him as the World Cup champion. He found his foiling feet again and won the final two races with relative ease. He concluded, “In the last two I was able to sail my own race from the front. It was difficult as there was a lot of seaweed on the course which made it hard to handle but I was able to get in front and stay there.” 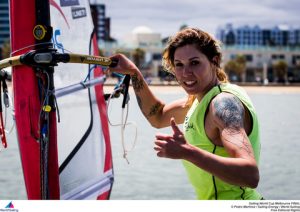 Florian Trittel (ESP) pushed up to second overall after a 1-2-4 scoreline. This relegated Guy Bridge (GBR), younger brother of Oliver, to third overall.

Poland’s Zofia Klepacka won gold in the Women’s RS:X in style by winning the Medal Race in front of the St Kilda Sailing Precinct.

Klepacka held a six point lead over a strong Chinese contingent going into the Medal Race and as she expected, they looked to hold her up at the start. Klepacka managed to shake them off and stay at the front of the pack before eventually crossing the finish line in first to seal the deal.

“I gave it full power and I was ready,” said Klepacka. “I was concentrating before racing. I knew it would be a short race and the Chinese girls attacked me before the start and after the start. 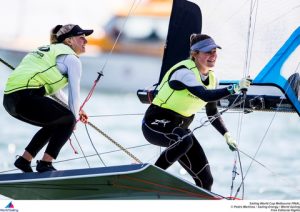 Klepacka missed out on selection to the Polish team for Rio 2016 and seriously contemplated her future within the sport. Gold in Melbourne has now given her a new lease of life, “I’m old,” exclaimed Klepacka, “I’m 30 and a mum of two kids and sometimes I think about quitting. But when you win a competition it motivates you to work harder.

“I think I’m going to try to go to the Tokyo Olympic Games and take a medal.”

Badloe grabbed the initiative/edge early on in the week and never looked back, finishing second in the Medal Race to conclude a dominant week of racing. “It was hard work but fun in the end,” explained Badloe on the day’s race. “I didn’t really capitalise on my start but I managed to sail my way to the front. I had to work hard to get up to speed and stay sharp. I got away with the win which is awesome.”

It was heartbreak for Great Britain’s Tom Squires who was on the course side at the start of the race and subsequently disqualified. Squires dropped out of a podium place which benefitted Ivan Pastor (ESP) and Makoto Tomizawa (JPN) who completed the top three.

Another scoring penalty severely dented another crew’s medals hopes, this time in the 49er. Diego Botin and Iago Lopez (ESP) went into the Medal Race wearing the yellow leader’s jerseys but were black flagged, knocking them completely out of the podium places.

Their loss was Benjamin Bildstein and David Hussl’s gain. The Austrians played to their strengths in the light wind and came through in second, enough to promote them and earn them a gold medal.

“It was very thrilling,” said Hussl after racing, “We are so happy to win this and it was worth coming to Australia.”

Bildstein added, “We tried to do our best and keep up at the top. We kept our options open and we made the right decisions.”

The scoreboard behind them was extremely tight with five points separating the next racers/teams. In the end, Harry Price and Harry Morton (AUS) and Josh Porebski and Trent Rippey (NZL) did enough to complete the podium.

In the 49erFX, Tess Lloyd and Eliza Solly (AUS) held on to their overnight lead to claim the win in Melbourne for the second consecutive year. Helene Naess and Marie Ronningen (NOR) and Haylee Outteridge and Nina Curtis (AUS) walk away/take home with silver and bronze.

Jason Waterhouse and Lisa Darmanin (AUS) controlled the Nacra 17 fleet all week and they continued their dominance with their sixth race victory out of ten to wrap up gold. Olivia Mackay and Micah Wilkinson (NZL) and John Gimson and Anna Burnet (GBR) complete the top three.

The Men’s and Women’s 470 Laser, Laser Radial and Finn concluded their fleet racing today and the top ten go through to Sunday’s Medal Races.

One door closes, another one opens