Ups and downs. Winners to underdogs 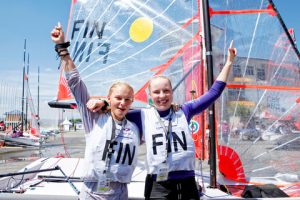 The 2016 Aon Youth Sailing World Championships will see the return of the inaugural girl’s 29er winners who are back to defend their title, but they know it won’t be easy.

Finland’s Sirre Kronlöf and Veera Hokka will start their defence off the back of a mixed year and view the 2016 Youth Worlds, to be held in Auckland, New Zealand from 14 – 20 December, as their ultimate goal for not only the season, but for their future career in the sport.

“Our aim is to start 49erFX next year and our dream is Tokyo 2020,” began Kronlöf, “To do that we need financial support through a sponsorship. It is hard in Finland as sailing isn’t such a famous sport. Doing well again in the Youth Worlds will help us toward our aim and getting support and sponsors.

“The Youth Worlds will help our future.”

Future goals aside, Kronlöf knows that the Youth Worlds is a pinnacle event in its own right, “The Youth Worlds is always the years main focus. There is such a variety of countries competing and lots of people who have a passion for the same things. It is a competition everyone follows.

“The level is high and it’s very interesting to see who takes the gold. And it’s a World Championship. Being a world champion is something every sailor dreams of and it makes the racing even more exciting. Youth Worlds gives us a lot of experience which lasts a lifetime.”

Kronlöf knew that the Youth Worlds was a big event because of her reaction after winning the gold with Hokka, “Well, personally I didn’t realize it immediately. I took me a week or two,” Kronlöf says with a laugh, “the feeling after crossing the finish line was unbelievable. We had so much bad luck finishing the 2015 season with equipment breakages and injuries for example, but we trained so much and it finally paid off.”

The 2016 season has had its fair share of ups and downs for the champions, but a pivotal win has given Kronlöf the last minute confidence boost her and her partner needed, “This season started great, but then somehow the regattas during the summer went badly. Maybe had too much pressure on us. But we won our youth nationals recently and the conditions we had there had been super hard for us, very shifty, but now we finally feel like we are more confident after winning in these kind of conditions.” 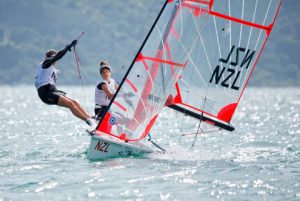 So with another title under their belt, can they defend their 29er gold? “We think we can win,” Kronlöf stated, “we are not coming to defend, but attack. We still feel after our summer that we are a bit of an underdog here. That’s what we want our mental state to be, as underdogs. We don’t care how our opponents see us.”

One of those opponents will be the home nations Greta and Kate Stewart. The sisters took bronze in Langkawi, Malaysia last year climbing on to the podium in a thrilling final race and will be looking to improve on that in front of a home crowd.

The Stewarts aren’t the only sisters in the fleet as Veronika and Katerina Zivna (CZE) and Andrea and Johanne Schmidt (DEN) are also racing.

Poland’s Aleksandra Melzacka and Maja Micinski were the highest ranked all female team at the 29er Worlds in Medemblik, the Netherlands earlier on in the year so will also be aiming for the podium.

In the boy’s division, France’s Gwendal Nael and Lilian Mercier took silver at the 29er Worlds and were the highest placed youth team. They were closely followed by Great Britain’s Crispin Beaumont and Tom Darling who claimed bronze.

There will be a new list of 29er boy’s medallists as the only podium finisher eligible to compete from last year’s Youth Worlds is New Zealand’s Jackson Keon. Keon however will compete in the Nacra 15 as he was beaten in the country trials by 14-year-old Francesco Kayrouz. Kayrouz is sailing with crew Oscar Gunn and will be aiming to better the silver that his compatriots took in 2015.

John Cooley and Simon Hoffman will be Australia’s hopes in the skiff class, a class in which Youth Worlds medallist, Olympic gold medallist and America’s Cup sailor Nathan Outteridge has excelled for the nation, showing the pathway open to all the competitors.

The boys 29er fleet will begin racing at 09:55 local time on 16 December and the girls start at 13:40 the same day. Both fleets will have three races.