Freak waves ahead for Markets and Geopolitics…

The BDI (Baltic Dry Index) lost another 21 points since last Friday the 9th of December and now stands closer to the 1,000 points, at 1,069 is close to yet another disaster…

The Panamaxes too were down 39 points with the BPI now reading 1,469 and the Supras’ BSI gained just two points now standing at 968.

With the Dry Markets High and Dry, very bad times lay ahead and wonder how many can go through now; the banking sector cannot assist anymore; dead…? The Funds cannot assess the risks nor the timing… Private Equity scrutinises everything and reluctancy is the name of the game!

The price of WTI above the US$ 52 although it reached 54… CAUTION as this can trigger other unwanted situations. Respect the poor and the middle classes as they make up 95 centum on Planet Ocean

We have long ago warned you of what is to happen; wonder if you know how to swim alone. Indeed we are living in tough times which I am pretty sure will not last, only the tough guys will – you dead well know what I mean.

The MIGRANTS raise the stakes mainly in Greece and Italy. Troubles on the Greek Island of Chios in the Eastern Aegean just off the Anatolian Coast; despicable situations there which can go completely off hand. The Europeans have called another fast one on Greeks and particularly to the islanders. Time though will tell who is gone to have the last laugh! Nearly 1,150 Migrants were saved south of Sicily – six lost their lives. It is too much to bear and politicians must make or break – enough with their lies. They cannot deliver and let’s wait to see when the six million in Turkey and northern Africa will enter Europe.

The Wars is Syria continues with relentless destruction of everything; political hype though will not go unpunished.

In neighbouring Turkey over the weekend we experienced a blood bath yet again with explosions aimed at the security forces there; policemen mainly were the victims. Expect more spill-over there given the Kurdish factor. At the same time, Turkey continues to pester and bully Greece. We have the feeling that the escalation of the war of words will create havoc that humanity will regret, so let’s see whether we can use as a last ditch diplomacy before going for an all-out war. The escalation of violation of Greece’s Airspace and territorial waters might backfire. Turkey is already a destabilised state. The situation is so perplexed given also the role of Putin’s Russia and his on and off relationship with Erdogan; two sinister presidents can turn the region in an inferno. Indeed Russia has any legitimate right to protect its territory, but creating mess in other regions is totally out of any context.

GREXIT, if not very soon, soon it will happen. The muppet puppet silly show and its fraternity governing Athens will soon go, but the vacuum left behind can only be filled with an ARISTOS Government which we have proposed, far from the madding crowd of politicians in all parties…

In the USA things sound strange given the accusations that the Russians interfered with the elections there favouring Donald Trump. Expect similar situation in Germany during the forthcoming elections…

Italy has another government and wonder if they can save the day. Italian banks might go more than messy soon! Can Gentiloni  deliver?

The 18th Annual Capital Link Invest in Greece forum in New York was more than a success. Let’s see if politicians get the right message and save Greece; let’s hope… 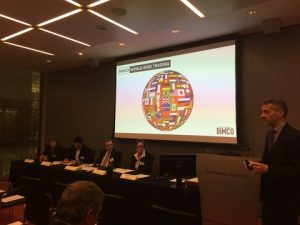 The London Shipping Law Center’s last event for 2016  at Norton Rose Fulbright earlier on tonight on  “Contracting out of corruption – the BIMCO Anti-Corruption Clause under the spotlight” was excellent  with many questions as well as networking; an event which must be repeated in all major shipping capitals!

Chaired by Philip Roche, speakers included Grant Hunter from BIMCO, Inga Froysa from Torvald Klaveness, Tim Springett from the UK Chamber of Shipping and Karl Even Rygh at Nordisk.

Captain Nicholas Frangos sails to eternity; one of the very very few down to earth Chiot Islanders at 90 left us and also he left behind a  unique example… Few shipowners on Planet Ocean can match his humane calibre…

That’s all for now, be on guard for the terrorists continue to plot against the free world! We have warned you.

Have a nice evening.