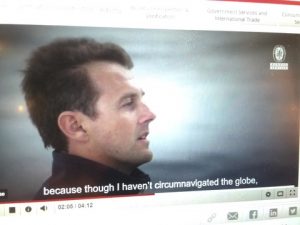 Bureau Veritas cheers its champion on.

Neuilly-sur-Seine, France, 12 December 2016 – Stéphane Le Diraison, an engineer from Bureau Veritas Marine & Offshore Division, is one of 29 entrants for this year’s Vendée Globe. The single-handed round-the-world yacht race is a legend in itself: no back-up units, no ports of call.

Stéphane set sail on the eighth Vendée Globe aboard his boat, the IMOCA 92 “Compagnie du Lit – Boulogne-Billancourt,” on 6 November. After 5 weeks into the race, he is currently on the way to the Pacific Ocean, holding the 10th place.

Stéphane is that rare breed: a top sportsman who also pursues a career in business. A graduate of the prestigious French engineering school ENSAM, he joined Bureau Veritas in 2008 as a structural engineer for shipbuilding. He currently works as a commercial engineer for renewable marine energy sources. As such, he holds responsibility for developing Bureau Veritas’ risk assessment, inspection and certification business for offshore wind farms. Hard work and professional experience have made him a highly skilled engineer, especially in material strength, which has an application in the love of his life: sailing.

Bureau Veritas has partnered with Stéphane in his sporting commitments since 2010. His greatest success in ocean racing to date has been the 2014 Route du Rhum, in which he finished fourth in Class 40.

As co-sponsor of his boat in the Vendée Globe 2016, Bureau Veritas has enabled Stéphane Le Diraison to combine two ambitions: work and sport. In preparation for the race, he was able to gradually scale back his working hours. Then he took a year’s sabbatical, starting in March 2016. His project embodies the Group’s values of safety, performance and respect for the environment. For Bureau Veritas, it is also an opportunity to associate the Group’s employees with a performance-beating initiative

“Bureau Veritas develops the professional talents of its employees, to make them champions of their disciplines. When some of them tackle major sporting challenges, we bend over backwards to reconcile their jobs with their passions. The whole company is now cheering Stéphane on and admiring his exploits. He is a special inspiration to us at a time when we are seeking to diversify our staff profiles and encouraging genuine inclusion. This will make our business more flexible and innovative” comments Xavier Savigny, Executive Vice President Human Resources at Bureau Veritas.

Stéphane Le Diraison, a Bureau Veritas staff engineer, is rising to the challenge of a lifetime: the Vendée Globe 2016

> « My boat »: the singular journey of Stéphane’s boat in the Vendée Globe http://en.bureauveritas.tv/video/622-wearebureauveritas-stephane-le-diraison-his-first-encounter-with-his-boat-vendee-globe-2016.html