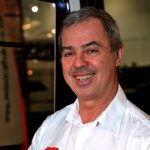 Capital’s Dr Jan Falkowski (56) is returning to the oceans with the crew of Team Britannia, a new round-the-world record attempt.

The consultant psychiatrist and experienced powerboat racer will join the round-the-world powerboat, which hopes to cut up to seven days off the current record of 60 days 23 hours 49 minutes, held by New Zealander Pete Bethune.

Team Britannia, led by British ocean racing legend Alan Priddy, will use a revolutionary designed boat that will reduce fuel consumption by up to 30 per cent and make the 24,000 mile trip smoother and faster.

The boat will be crewed by a team of 12, including up to five wounded and injured veterans on each of the seven legs of the voyage. The veterans are being supported by the charity Blesma.

Mr Priddy commented: “I am delighted that my latest record attempt reunites me with Dr Jan. Jan and I have completed many voyages together and so he is a key part of the team that will bring the round-the-world record home to Britain. Experience and a cool head matters when you’re navigating the world’s oceans, and Jan brings yet another illustrious nautical CV to Team Britannia.”

Dr Jan Falkowski added: “I am really looking forward to taking part in the greatest powerboating challenge in the world – especially to be doing it under the watchful eye of Alan Priddy. Alan has assembled a great team and I look forward to co-skippering what is a brilliant opportunity to showcase Britain’s maritime clout on a global level.”

Jan, who comes from London, will be Team Britannia’s co-skipper on their round-the-world record attempt. As well as being second in command, Jan is the ship’s doctor, possessing a plethora of medical qualifications and is one of the UK’s top consultant psychiatrists.

More about maritime claims and maritime liens in Australia