Running away with the RS:X 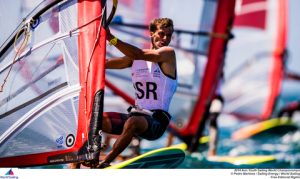 There could be some early winners at the 2016 Aon Youth Sailing World Championships as Great Britain and Israel begin to run away with the RS:X gold medals on day three.

It was a day of opposites on the Hauraki Gulf as light north winds replaced the strong southerly winds that have been a feature of the first two race days, but that change didn’t seem to disrupt Israel’s Yaov Omer or Great Britain’s Emma Wilson as they continued to take a strangle hold on the Youth Worlds RS:X fleets in Auckland, New Zealand.

Extending his lead at the top of the boy’s competition, Yoav Omer knows that consistency is key when it comes to a top international regatta, “The most important thing is to be stable in your results and that’s what I have been doing the past few days, and I want that to continue.”

Omer certainly has been stable and that is evident as his day three results of 4-3-1 are his worst run of scores at this year’s Youth Worlds. Explaining why his results had dropped from previous day’s, Omer said, “It was light winds today and it was also from a different direction to the first two days. That was a little difficult for me. I think I have improved a lot though.” 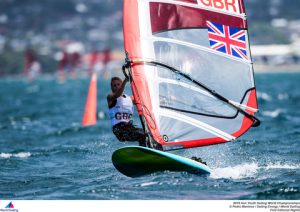 With a lead of 19 points and with four races to go you could think that the gold is all but wrapped up for the Israeli windsurfer, but Omer knows better than that, “No. No way is it over. Everything is open at competitions like this. Conditions can change and it takes just one bad race you know. Focus is the main thing.”

The nearest competitor to Omer is Sil Hoekstra (NED) who scored two seconds and a third to move up to second overall. Third place is China’s Chen Hao Chen.

Over in the girl’s RS:X fleet the wins keep on coming for Great Britain’s Emma Wilson. The Briton took two bullets and a second on day three and there is one simple reason why the results keep flowing, “I really like these conditions,” said Wilson with a smile, “and I like this weather. I was really fast on the downwinds today.”

Despite being in a fleet of 18, Wilson is adamant that only one person can affect how she sails, and that is her, “I sail how I want to sail and won’t let anyone control me. I’m the only one that can dictate how I race.” 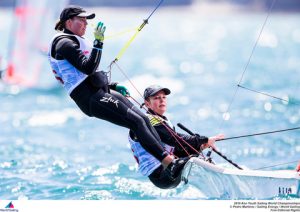 It’s that steely determination and focus that has given Wilson a 13 point lead over second placed Katy Spychakov (ISR), but the British windsurfer doesn’t always get it right, “We had the RS:X Youth Worlds in Cyprus recently and I was fifth. I want to rectify that here.”

Peruvian Maria Belen Bazo holds on to third behind Wilson and Spychakov with a 3-6-7 for the day.

Another team with daylight over the fleet are Tim Mourniac and Charles Dorange (FRA). Although the French duo are top after scoring a second and two thirds, they are now facing a comeback by Italy’s Gianluigi Ugolini and Maria Giubilei who took performance of the day with three bullets from three races. The Italians are in second, 15 points behind their European rivals.

There is a Trans-Tasman battle shaping up at the top of the girl’s 29er fleet as Australia and New Zealand move up to first and second respectively. Natasha Bryant and Annie Wilmot (AUS) are top but have Kiwi sisters, Greta and Kate Stewart, hunting them down. The Stewart sisters made the best of a day when their rivals were making mistakes around them to move up in to medal contention.

Gwendal Nael and Lilian Mercier (FRA) sit top of the boy’s 29er fleet despite a 12th place finish in the final race of the day. The French team discard that result to hold a five point lead over Crispin Beaumont and Tom Darling (GBR) who are second.

Poland’s 2015 Youth Worlds 420 champions Julia Szmit and Hanna Dzik moved themselves up in to a great position to defend their title. The Polish team are top thanks to their consistent form. On day three they bagged themselves a bullet before slipping to 15th, which they now discard. Italy’s Alexandra Stalder and Silvia Speri are their nearest rivals just four points back in second. Isabel Davies and Gemma Keers (GBR) are third.

A bullet and a discarded seventh keep USA’s Wiley Rogers and Jack Parkin at the top of the boy’s 420 fleet. The top three are close on points though as Israel’s Ido Bilik and Ofek Shalgi are just two points back. Italy’s Edoardo Ferraro and Francesco Orlando are three points behind the Americans.

Australia’s Finnian Alexander took two bullets to open up an 18 point gap back to Denmark’s Patrick Doepping and New Zealand’s George Gautrey who both have 33 in the boy’s Laser Radial. Alexander however will tread with caution in the coming days as he has a disqualification on his scorecard from the very first race of the Youth Worlds. So far, so good for the Aussie sailor since then though.

Sandra Luli (CRO) is still top of the girl’s Laser Radial, but Rio 2016 Olympian Dolores Moreira Fraschini (URU) is chasing hard. The Uruguayan took a bullet and a 10th compared to the sixth and discarded 20th Luli scored. The Croatian still leads by two points overall. Germany’s Hannah Anderssohn rounds out the podium in third.

Racing continues at the Youth Worlds and is scheduled to begin at 09:55 local time at the Torbay Sailing Club on Monday 19 December.

Intercargo and Intertanko raise the spirits