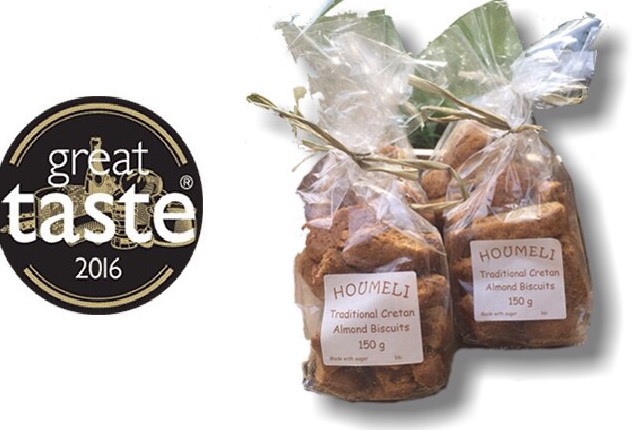 The first star of the Great Taste 2016 has been awarded to HOUMELI Cretan products by the internationally renowned Great Taste Awards Competition which is also known as food “Oscar Awards”. HOUMELI was given this distinction for the Cretan traditional almond biscuits characterised as “unusual biscuits” by the tasters.

The Great Taste Awards competition is held every year in the UK and is sponsored by the Guild of Fine Foods which is the most recognised and widely accepted certification organisation for the fine quality in the food and drinks space.

Around four hundred tasters try more than ten thousand products every year in a process which begins in March and ends in July when the awards are decided. This year only 141 managed to win the three stars award, which is the highest distinction, another 878 got the second place of two stars while 2520 of products were given one golden stars, among them being the traditional Cretan HOUMELI biscuits.

With great satisfaction and encouragement, such an award has been received by this newly established company which counts less than a year of activity in London, in the business of the import and production of tradition local Cretan delicacies. Honey from thyme and pine, sweats produced only of original virgin Cretan olive oil and dry fruits, barley rusks, are made by small local family  producers and various other local products of unparallel taste and nutritional value carrying the HOUMELI brand, travel around the world from mouth to mouth spreading the “sounds” of the Cretan tasty melodies and offering the opportunity to rebalance your daily diet with the merits of hundreds of years old Cretan tradition of pure and nutritious recipes.

Viewers can log on www.houmeli.com and for further information email  info@houmeli.com

Despite Capers “rebound” Markets are still down…