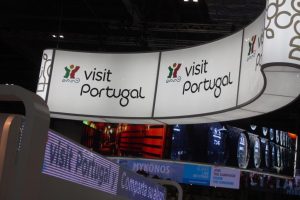 An invitation from Portugal.

Some years ago – I won’t tell you how many – I had to commute from Aljustrel, the small town where I went to school in Portugal, to the city of Beja, the capital of the Baixo Alentejo district, to sit my exams.

At the time, I was more intent on gaining pass marks than gazing at the sights of Beja, but I came to realise that the place boasts impressive history and monuments.

I was therefore delighted to see the city being promoted among an extensive series of Portugal stands at the 2016 World Travel Market in London.

Beja is some 40 km from Aljustrel, where I grew up, and has more than twice the population. My home town has a long history of mining dating back to the third millennium BC, although in recent years the industry there struggled to achieve viability until copper and zinc commodity prices strengthened. Mining operations were revived a couple of years ago by a Portuguese company called Almina which now employs several hundred people and on its website highlights access to the ports of Setúbal, Sines and Huelva. It has been reported that Turkish interests are considering investing in the town’s mines. Aljustrel is now said to have “the highest employment rate in Portugal.”

The one-hour bus ride to Beja took me to a place more familiar to tourists, although one that is still by-passed by many.

One of the striking backdrops in the display at the World Travel Market was a poster of the 1310 Torre de Menagem, which is the keep of the Castelo de Beja (Beja Castle). Forces of Dom Afonso Henriques, the first king of Portugal, captured Beja in 1162, having taken Lisbon 15 years earlier. Nearly a century later Afonso III initiated reconstruction of the city’s castle, and the following century King Dinis set in train the building of the keep together with the town walls.

The 36 m-high tower set within four square corner towers is the highest in Portugal and one of the most important examples in the country of medieval architecture. It has an interior spiral staircase of nearly 200 steps that visitors may climb.

The castle dates from Roman times and was fortified by the Moors who were driven out in the “re-conquest” by the Portuguese after more than 400 years of settlement.

From the battlements, one can gaze at a vast panorama of the Alentejo plains with wheat fields and olive trees. The castle now houses a small military museum.

Next to the castle walls the Igreja de Santo André dates from the 4th century and is one of the few standing Visigoth churches in Portugal.

Julius Caesar dubbed the settlement Pax Julia, declaring it a regional capital, and a Roman forum was a hub of activity in the town square. The Moors renamed the town Beja, and except for a short time in 715, were entrenched from 711 until driven out in 1162 by the Christian army led by Fernão Gonçalves, and in 1165 they were forced out of the neighbouring fortified town of Serpa.

During the 17th century conflicts between Spain and Portugal, Beja was attacked and occupied by both armies. The French sacked the city and massacred the inhabitants during 1808. In 1962 the now revered General António Delgado led a military uprising that was quashed by the Salazar regime.

Beja’s Convento da Nossa Senhora da Conceição dating from 1459 is celebrated principally because of the 1669 publication in French of the “Lettres Portugaises.” These were five lyric love letters written by the 26-year–old nun Mariana Alcoforado to her lover the Comte de Saint-Léger after he deserted her. Architecturally, the convent is a mixture of Gothic, Manueline and Baroque, with Hispanic-Arab tiles. It houses the Museu Regional da Rainha Dona Leonor. The 13th century Capela dos Tumulos do Convento de São Francisco, attached to the building, has been rebuilt as a historic inn, a pousada.

A speciality of the town is pão de rala, a cake made with almonds and pumpkin.

Beja helps justify the description of Alentejo as “a magic region of medieval towns and world-class vineyards.”

The landscape of Alentejo is dotted with castles (for instance my home town had a castle on what is the site now  of the beautiful chapel Nossa Senhora do Castelo), forts, watchtowers, and fortified towns and villages. Even when the Re-conquest was established in the south, it was necessary to prevent attacks by sea from the west, reinforce the frontiers of the country, and to fight any advances that might be made into the interior.

Best known Alentejo landmark is perhaps the Unesco World Heritage site (since 1986) of Evora, of which it has been said “the entire city is a museum, with its megalithic heritage, Roman temple, cathedral, casas pintadas (painted houses) palace and convent (the convent is now a pousada) and the magnificent Praça do Giraldo.” The city’s website adds: “Evora should not be mistaken as a sleepy old relic that is reliant upon its glorious past. The city is young and vibrant, with a large student population who attend one of the world’s oldest universities.”

Alentejo has another Unesco accolade: it is inscribed in the Representative List of the Intangible Cultural Heritage of Humanity for its polyphonic choral song tradition. Unesco refers to the genre as “a fundamental aspect of social life throughout Alentejano communities, permeating social gatherings in both public and private spaces.”

Alentejo is Portugal’s biggest province by area, but the Algarve continues to lead in the tourism stakes.

The Algarve boasts “300 days of sunshine a year, 200 km of spectacular coastline, some of the best beaches in Europe, over 30 top golf courses, an established modern tourist infrastructure, a diverse landscape, great food and wine… the list goes on”.

The Phoenicians established trading ports along the southern coast around 1000 BC, and the region was settled by pre-Celtic tribes by the 6th century BC. These peoples were followed by the Carthaginians, who founded Portus Hanibalis (Portimão) in 550 BC. In the second century BC, the Romans were in charge, and many ruins of their buildings can be seen today.

In the 5th century the Visigoths took control of the Algarve until the beginning of the Moorish invasion in 711. Under the Moors, the region was called Al-Gharb Al-Andalus (Al-Gharb means “the west” and Al-Andalus was the Arabic term for Iberia).

Under Christian domination, the region became known as the Kingdom of Algarve. In the 15th  century, Prince Henry the Navigator directed from the Algarve the maritime voyages which established Portugal as a great colonial and sea power. Trade flourished and Lagos became the capital of the province.

The Algarve was transformed in the 1960s into a popular destination for tourists, many of whom own property there, either as temporary or permanent residents. Investment in infrastructure, notably hotels, golf courses and marinas, ensures that tourism continues to be a vital part of the economy.

One of the best beaches is Praia da Marinha on the Atlantic coast in Caramujeira in the municipality of Lagoa. Noted for its rock and cliff formations, it has been named by the Michelin Guide as one of the 10 most beautiful beaches in Europe and as one of the 100 most beautiful in the world. In 1998, it received the Golden Beach award from the Portuguese Ministry of the Environment for its outstanding natural qualities.