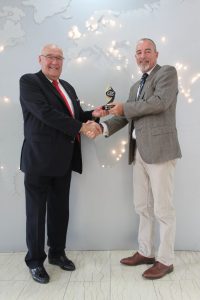 29 entries were received for the annual Award, which was started as the Chairman’s Award for Environmental Excellence in 2012 and extended in 2015 to also encompass health, safety and security initiatives.

Measures to reduce oil wastage during the maintenance of the HullWiper ROV earned GAC EnvironHull the top prize. Maintenance teams working on the eco-friendly hull cleaning system identified the need to cut down on spilled oil and the financial and environmental costs involved. GAC EnvironHull responded with a three-pronged solution:

The approach was initially implemented in Valencia in tandem with upgraded Safe Work procedures and was then rolled out to other HullWiper bases in Singapore, Rotterdam, the UAE and Gothenburg.

Runners-Up
The efforts of GAC Singapore to educate the next generation about the importance of HSSE led the judges to name it the runner-up in the 2016 awards. 40 children from employees’ families were invited to the office for a fun day learning about safety rules. A video featuring those little champions was produced. It impressed the participants at the Contractor HSSE Supplier Workshop organised by STASCO so much that it was voted the Best Behavioural Safety Initiative 2015-2016

The second runner-up was GAC Samudera Logistics for its introduction of a blue spotlight on four forklift trucks to warn pedestrians of their approach, reducing the risk of collisions.

Other noteworthy initiatives singled out for mention were:

Patrik Halldén, Group Vice President – Human Resources, says: “The range of entries for the 2016 Chairman’s Awards is sound proof that GAC is on the right path to developing a strong positive HSSE culture throughout our organisation.”