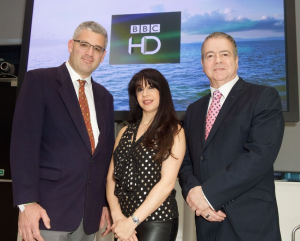 10th January 2017 – BBC Worldwide has announced today the launch of a global entertainment channel, BBC HD, the company’s first channel produced exclusively for cruise ships and the wider maritime market. It will go live through Global Eagle Entertainment’s (GEE) MTN TV network, with P&O Cruises and Cunard being the first to offer this to their guests.

Content on the new channel will cover all genres ranging from drama, comedy and factual entertainment to natural history and documentaries. Fans of much loved soaps such as Eastenders, Holby City and Casualty will be delighted to know that these will air on BBC HD close to the UK broadcast so they can stay up to date with their favourite shows as they enjoy their cruise holiday.

BBC HD complements BBC World News, which launched on MTN TV in 2010 and is available on cruise ships throughout the world.

Zina Neophytou, Vice President, Out of Home, BBC Worldwide said: “There has always been a strong demand for BBC content within the travel and hospitality sectors including cruise ships so launching a bespoke global entertainment channel on MTN TV alongside BBC World News is an obvious step. BBC HD will be the one-stop shop for the best of British TV content.”

“The BBC was our initial launch partner when MTN TV was rolled out in 2010, and once again they are leading the way in pioneering more TV programming choices for cruising passengers around the world,” said Walé Adepoju, Executive Vice President, Media & Content at GEE. “The addition of the BBC HD channel is part of our expansion plan for MTN TV to provide more entertainment options relevant to today’s cruising market.”

P&O Cruises Senior Vice President Paul Ludlow, said: “We are delighted that our guests will be able to travel the world but still keep up with their favourite television shows for that touch of home. BBC HD will be a superb addition to our in cabin entertainment and I am sure will be welcomed by our guests on both P&O Cruises and Cunard.”

As the launch customer BBC HD will be available on all P&O UK and Cunard ships with the channel also becoming available to the wider cruise industry in due course.

BBC Worldwide is the main commercial arm and a wholly owned subsidiary of the British Broadcasting Corporation (BBC). Its vision is to build the BBC’s brands, audiences, commercial returns and reputation across the world. This is achieved through investing in, commercialising and showcasing content from the BBC around the world, in a way that is consistent with BBC standards and values. The business also champions British creativity globally.

Both Dry and Wet Markets losing steam; Geopolitics flare up…