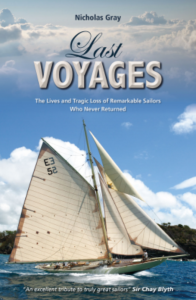 THE LIVES AND TRAGIC LOSS OF REMARKABLE SAILORS WHO NEVER RETURNED

As part of its Making Waves series, Fernhurst Books is proud to be publishing this collection of eleven original, moving accounts of the lives and final voyages of some of our lifetime’s finest sailors.

These memoirs are just as much a celebration of the good – tales of hope, achievement and courageous spirit – as they are an account of the tragic final voyages. As Sir Chay Blyth says in his Foreword: “No sailor ever embarks on a last voyage. They set out with hopes and aspirations; excitement and perhaps a little apprehension; the horizon offering many possibilities. None of the voyages described in this book were undertaken with the intention of it being the last. But these remarkable sailors all lost their lives at sea, many alone, and many whose bodies were never returned to land.”

Included are world-renowned racers, like Eric Tabarly and Rob James, highly experienced cruisers and adventurers, like Peter Tangvald and Bill Tilman, as well as other famous and some less well-known sailors. Starting with the sad loss of Frank Davison and Reliance in 1949, the book concludes with the amazing last voyage of Philip Walwyn in 2015 – crossing the Atlantic single-handed in his 12 Metre yacht Kate.

What makes this collection unique is that all of the men and women described were friends with or known to the author, Nicholas Gray, who himself competed in several short-handed long distance races, where he met and raced against many of these fascinating characters.

A chapter centred on Donald Crowhurst describes the author’s interaction with the notorious sailor, as well his ill-prepared and fatal attempt at competing in the single-handed non-stop round the world Sunday Times Golden Globe Race of 1968-9. Publishing in early 2017, the book coincides with the release of the British biographical drama film based on Crowhurst, The Mercy, starring Colin Firth and Rachel Weisz.

Peppered with photographs showcasing the sailors and their yachts, this is a refreshing look at those who have helped to shape this sport’s history, honouring their lives and accomplishments before detailing their tragic last voyages.

In his Foreword Chay Blyth concludes: “Last Voyages is a superb read. I thoroughly recommend it for anyone, like me, with a love of the sea or an admiration of those who have the courage to contend with this mighty force of nature.”

Publishing as a paperback and eBook on 6th January 2017, Last Voyages will be available to buy from all good bookshops, websites, chandleries and direct from www.fernhurstbooks.com.

Nicholas Gray has sailed all his life and owned 14 boats. He raced trimarans short-handed and has competed in the Round Britain & Ireland and Azores and Back races, winning his class in both. During this time he competed against many of the sailors featured in this book. He has worked in Merchant Banking, as a solicitor and in the petroleum industry. He has also had an interest in a sailmaking company and owned a boatyard specialising in the restoration of classic wooden boats.

Fernhurst Books, founded in 1979, is an independent publisher specialising in watersports books. After a period as Wiley Nautical, Fernhurst Books was re-established in 2013 and continues to publish books that instruct, inform and inspire those with a passion on, in or under the water. Its 150 titles range from how-to guides to coffee-table books and cover sailing, surfing, canoeing, kayaking, swimming, diving and fishing.

Making Waves is a new series about the real lives of sporting heroes on, in or under the water. Last Voyages is the third title in this series. The other books in the series are: Golden Lily, the account of Lijia Xu’s journey from poverty in China to becoming Asia’s first ever dinghy sailing gold medallist; The First Indian, Dilip Donde’s personal account of the first Indian solo circumnavigation under sail.