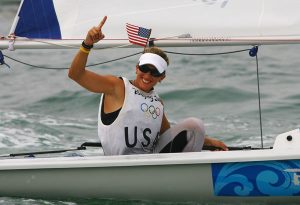 On the first stop of World Sailing’s 2017 World Cup Series in Miami, USA, a home nation favourite will make a return in an attempt to add to her already jam packed trophy cabinet.
Two time Rolex World Sailor of the Year and Beijing 2008 Olympic gold medallist Anna Tunnicliffe will join 452 sailors in Regatta Park at Coconut Grove, Miami from 22-29 Januaryto take on the Laser Radial fleet with the experience of not only sailing, but of another determination and endurance filled sport behind her.

Tunnicliffe has been at the top end of her profession when it comes to sailing with a string of podium finishes at high profile events which culminated in her winning a gold medal at the Beijing 2008 Olympic Games in the Laser Radial. A move into Match Racing for the London 2012 quadrennial resulted in further success including a World Championships gold but she fell short at the Games itself. Between 2008 and 2011 Tunnicliffe also kept the US Sailing Rolex Yachtswoman of the Year to herself with four consecutive awards. 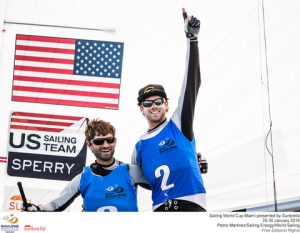 This winning pedigree also fuelled her assault on the high intensity CrossFit world. Using the fitness regime to keep her in peak physical condition ahead of the London 2012 Olympic Games, Tunnicliffe didn’t just take part, she excelled. In 2013 the American produced her best result of ninth place in the CrossFit Games, the pinnacle event for the sport featuring the best athletes from thousands of aspirant applicants.

The last time Tunnicliffe competed at World Cup Miami was in 2013 when she took on the 49erFX finishing second. Despite her history and obvious will to win, Tunnicliffe will have a tougher time to get among the medals this time around as she makes a comeback in a fleet that boasts 2016 Laser Radial world champion Alison Young (GBR), London 2012 bronze medallist Evi van Acker (BEL) and 2016 Youth Worlds champion Dolores Moreira Fraschini (URU) to name but a few. 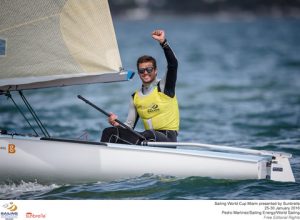 Great Britain’s Women’s 470 teams will look to take over the mantle from Rio 2016 gold medallists Hannah Mills and Saskia Clark while there are some new world champions looking to upset the established order in the US Sailing ranks.

Amy Seabright and Anna Carpenter will take on Sophie Weguelin and Eilidh McIntyre as the British Sailing Team look to replace their outgoing Olympic champions who are taking on new challenges. The focus can’t just be on national status though as fourth placed Rio 2016 pair Afrodite Zegers and Annaloes van Veen (NED) and fifth placed Ai Kondo Yoshida and Miho Yoshioka (JPN) will also be looking to get their Olympic quad off to a good start.

In Auckland, New Zealand last month, USA’s Wiley Rogers and Jack Parkin wrapped up the 2016 Aon Youth Worlds title in the 420 with a day to spare. The young guns now have an opportunity to measure themselves in the 470 fleet against the established team of Stu McNay and Dave Hughes (USA) in their first competitive outing since becoming world champions.

Other young guns on the start line will be Spain’s Jordi Xammar, who begins life with new crew Nicolas Rodríguez García-Paz and Austrian helm Nikolaus Kampelmühler who has teamed up with Olympian Florian Reichstädter.

The Finn fleet will feature 2016 World Cup Miami winner Jorge Zarif (BRA), 2016 World Cup Final winner Jake Lilley (AUS) and France’s Fabian Pic who has ambitions of claiming the French #1 spot with Jonathan Lobert taking a break from sailing. Pic won a race at the 2016 Finn Gold Cup in Takapuna, New Zealand in a strong fleet last year so has shown signs that he is more than capable of carrying French hopes.

The Laser, Laser Radial, Finn and 470 fleets will have six days of fleet racing from Tuesday 24 January which will culminate in LIVE medal races on Saturday 28 January.