Whither container shipping? IMIF is told of “reasons to be cheerful”

Emerging trends in the benighted container shipping sector offer some grounds for optimism, the International Maritime Industries Forum heard at its latest meeting.

Ian Webber, chief executive of Global Ship Lease Inc, discerned what he called some “reasons to be cheerful” when he addressed the January 16 2017 gathering at the London offices of law firm Norton Rose Fulbright, on the subject Whither Container Shipping?

Ship scrapping and contracting developments were encouraging, and although the year ahead would be challenging, it could see an easing of the unsustainable conditions that have frustrated many carriers.

Mr Webber blew the trumpet for the type of tonnage he has favoured: small to mid-sized.

Trade growth was expected to remain strongest in non-main lane and intra-regional trades, served by such units, he said. The supply-side dynamics were Improving in those segments. While the large boxships plying the Asia to Europe and North America routes commanded most public attention, such trades accounted for only 30% of global movements, and “mid-size and smaller ships remain key to most trade lanes.” 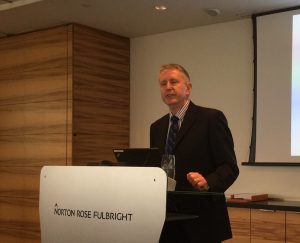 The Global Ship Lease chief insisted that these handier ships remained key to most trade lanes. Most trades were served by ships smaller than 10,000teu, he said, stating that almost 30% of ships in the global fleet were deployed on Intra-Asia trade alone. He quoted a report that ahead of the opening of the new Panama Canal locks around 80% of Intra-Asia vessels were sub-2,000teu.

He declared: “We believe firmly that there is a good future for smaller tonnage.”

Mr Webber has led Global Ship Lease, a New York-listed containership lessor, since its formation in 2007. His company controls 18 vessels with total capacity of 82,312 teu and an average age, weighted by teu capacity, of 11.8 years at September 30 2016.

Fifteen of the ships are on charter to CMA CGM and three to OOCL. At present the France-based shipping group is reportedly preparing a takeover bid for the Hong Kong line, expected to be one among the series of consolidations that has rocked the industry in the last three years. 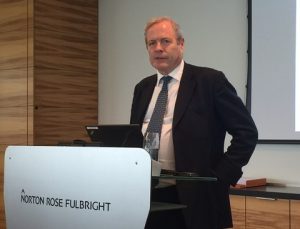 …followed by Michael Parker of Citigroup

Global Ship Lease is in the fortunate position in a generally weak market to have an average remaining term of its charters at September 30 2016 of 4.2 years on a weighted basis. It will have no exposure to the spot market until September 2017, asserted Mr Webber.

Global Ship Lease has its smallest ship at 2,207teu and largest 11,040teu, fleet deployment yielding what Mr Webber said were contracted revenues totalling $680m. The company is owned 45% by CMA CGM, with public shareholders 34%, and directors and executive officers 21%.

Enjoying a current market capitalisation of $77m, Global Ship Lease was spun out of the CMA CGM group, acquiring 17 of its ships for $1bn, scrapping two and buying three. 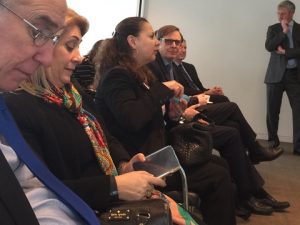 A view from the front line of the audience

Highlighting how industry expectations had changed, Mr Webber pointed to a presentation of a few years ago by CP Ships which included a graph which showed that “in only four years since 1980 has containership demand grown at less than 4%.”

A dramatic downturn was not long in coming, but now there was a turn-round. At the end of 2016 the boxship order book was “only” 3.19m teu, or 15.7% of the fleet, the lowest percentage since 1999, according to industry consultants Alphaliner. This contrasted with a level of 20.5% at end-2015.

The ratio for mid-size and smaller segments ranged from 1.3% to 7.1%, as against a “quite substantial” 49.6% for vessels of 10,000teu or larger. Some 2.8m teu of new capacity was scheduled for delivery in 2017 and 2018, adding to oversupply of 1m teu. Newbuilding deliveries were concentrated in the larger segments, but would place continued pressure on the cascade of sizes. All fleet segments below 8,000teu had shown either contraction or net neutral growth, based on data up to September 2016. 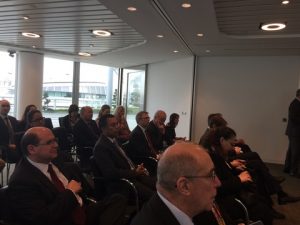 A full house; the left back side of the auditorium

He reminded the audience that although ship supply growth was moderating, its starting point was one of significant over-supply.

Scrapping had risen in 2016 to a rate twice that of the previous year, and involved 200 ships. Idle capacity totalled 344 ships (predominantly small and mid-sized) of 1.42m teu, which was 6.7% of fleet capacity versus. 6.8% at end-2015. Scrapping volume was three times that of 2015, but “more was needed.” Mr Webber added: “Scrapping activity continues to be concentrated in mid-size and smaller tonnage; youngest vessel scrapped to date was a seven- year-old Panamax.” Mid-size and smaller tonnage accounted for 86% by number of ships demolished: of these, 85% were owned by lessors. 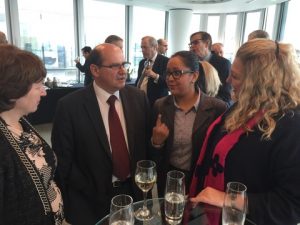 Mr Webber listed consolidations involving some of the biggest companies in the liner sector, noting that 2016 was a record year for such transactions. He said that the failure of Hanjin Shipping of South Korea meant that claims and losses would percolate throughout the liner industry.

Liner consolidation and mega-alliances would lead to improved conditions for operators. Tonnage would be redelivered to the charter market, which would lead to higher levels of scrapping.

The impact of consolidation was expected to be “net-negative for containership lessors exposed to the spot charter market in the near term, but more positive over time.” It meant more efficient capacity utilisation by liner operators, and a negative impact on the supply-demand balance for lessors, with a less fragmented lessee market.

Trade fundamentals remained weak, with around 3.8% growth expected in 2017. The forecast for containerised trade was in the region of 4%. World GDP growth for the year was projected to be around 3.4%. 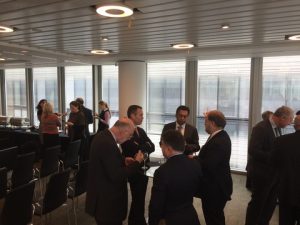 …another group of delegates during the buffet luncheon

Mr Webber said that newbuilding prices continued to soften as the yards came under pressure across most shipping sectors. Spot market charter rates remained close to all-time lows, fluctuating around operating expenditure for most vessel size segments. Spot rates for some segments (for example “old” Panamax ships) were now materially below ‘opex.’

Second-hand prices were expected to come under increasing pressure, with charter-free values for ever younger tonnage anticipated to converge on scrap values over the coming months. Relative value of charter coverage (on a cash-accretive basis and to quality counterparties) should continue to rise. Distress in the sector was expected to catalyse additional scrapping and generate attractive counter-cyclical purchase opportunities. 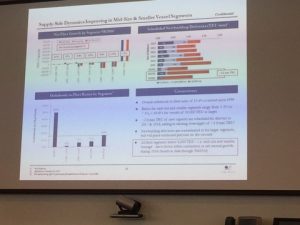 One of the many interesting and meticulously prepared slides

The speaker was asked what might be the effect internationally of the reported $26bn five-year financing deal between China Cosco Shipping Corporation and China Development Bank. ”The short answer is nothing,” he replied.

Nor did he expect new types of finance to emerge of the former scale of the German KG investment system.

He was asked whether Global Ship Lease ought to spread its risk by agreeing charters with other operators. He replied that the company was happy with both CMA CGM and OOCL which had performed 100%. It was prepared to expand its portfolio if offered viable deals.

He dismissed another suggestion from the floor, that the industry should go in for container bulker tonnage which could “smash the market” with cheaper freight rates. Mr Webber said that tonnage such as 20,000teu ships had sought to adjust to market conditions by slow steaming, although they had not picked up steam when bunker prices fell. 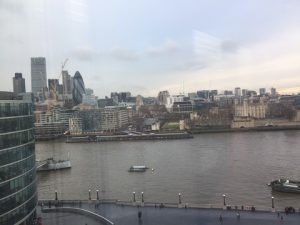 Despite the grey day, audience members enjoyed spectacular views of the Thames and City from the ninth floor of the law firm’s offices.

Despite the grey day, audience members enjoyed spectacular views of the Thames and City from the ninth floor of the law firm’s offices.  Welcoming words had greeted them from Peter Glover, who specialises in shipping, marine insurance and trade at Norton Rose Fulbright, followed by Michael Parker of Citigroup. Alan McCarthy chaired the meeting and expressed thanks to Mr Webber and to the lead host, Harry Theochari, global head of transport at Norton Rose Fulbright, for the constructive and convivial atmosphere and generous hospitality. 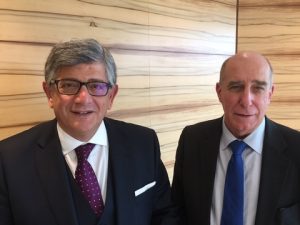 Capers alone cannot save the Markets, BREXIT shakes the World

Where is Jim Davis?