Exquisite output influenced by the ancient techniques and modern heritage of Asia is one feature of the 29th edition of the London Art Fair. The global and catholic nature of this huge event was reflected in the presence of galleries and artists from Japan, South Korea, the US, China, Germany, France, Slovenia, Italy, Greece and Portugal – a list that is far from exhaustive, but sat comfortably alongside much of the best the UK offers.

Buzz around the stands.

Contemporary Japanese woodcuts from the distinguished printmaker Nana Shiomi were among the finest work and were shown by Rabley Contemporary Gallery, based in Marlborough, Wilts.

Rabley occupied much of its usual stand number G14, to the left of the large clock at the top of the stairs at the venue, the Business Design Centre, Islington, with a tribute to the Osaka-born artist. Visitors admired the elegant brushes and knives of her trade, and learned that she has just launched her latest book This Side and The Other Side, Woodcuts 1996-2016. The book and a limited-edition print are available from www.rableydrawingcentre.com.

Nana Shiomi’s tradition-linked oeuvre made a fascinating contrast to those exhibits elsewhere in the vast hall which trod the path of experimentation and daring.  There was rightfully acceptance for all genres under the high glass-domed roof as the fair, from January 18-22, drew its thousands-fold throng.

Some of Nana’s images are distinctly Japanese – tea bowls, and restless sea waves, for example; some more universal.

Born in Osaka, Ms Shiomi began painting at the age of 14 and gained degrees in oil painting and printmaking at Tama Art University, Tokyo. Attending a university seminar familiarised her with the work of Marcel Duchamp which “changed my life.”

A Bowl of Water. by Nana Shiomi.

her website: “The concepts of Duchamp’s work such as ‘art can be multiple,’ ‘art can be ready-made,’ ‘art and language’ and ‘art as performance’ seemed to me to be the very essence of contemporary art.”

Moving to London in 1989 proved to be her springboard for extensive international recognition, with many events over the years, one of the most recent being a four-month exhibition at the end of 2016 at the Keeper’s House of the Royal Academy.

She was profoundly attracted to pop artists such as Andy Warhol and Jasper Jones, and at the age of 20 grew interested in the concept of hanga (prints). A prerequisite of prints is the fact that “plate and print” are always opposite configurations. “I soon encountered dualistic principles everywhere, such as right and left, top and bottom, East and West, man and woman and so on. It is no mere coincidence that since then most of my work is composed of two opposing sides, right and left.”

Basing herself on the traditional ukiyoe woodcut technique – using a baren (hand-held printing pad) to spread water-based ink inks to individually carved colour relief blocks and letting it soak into the fibres of washi Japanese paper was an integral element in determining her style.

She says that since coming to the UK, “living in a land not my own, I am constantly forced to think about issues relating to my own identity, and in recent years have grown more aware of my own roots.”

Rabley Contemporary is a leading exponent of Royal Academician Eileen Cooper (who curated Nana’s 2016 RA occasion) and her latest works on display included the linocut Night Music, which shows a couple abstractedly in a dance clinch in which the woman takes the lead. Ms Cooper has approached such a theme previously, but it bears reinterpretation. 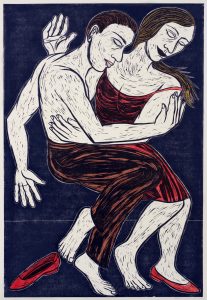 The gallery says of this revered artist: “The figure of a woman is central to Eileen Cooper’s imagery: heroine, goddess of myth, mother, lover. Her strong drawing with fluid simplified lines and colourful compositions make her work immediately recognisable. Her style invokes Picasso and Chagall as well as the Mughal miniatures she admires.”

Among her inspirations are the story of Diana and Actaeon (the goddess of the hunt who humbles the young hunter when he discovers her bathing in a stream) and other mythological tales.

In October 2011, Lancashire-born Eileen Cooper became the first woman to be appointed an officer of the Royal Academy, with the title bestowed of Keeper.

A further printmaker and painter with Rabley backing is Katherine Jones, and on show was Clear Space, a collagraph and block print on paper. The style is original, but it sometimes brings to mind Japanese preoccupation with botanical history and the metaphors of a fragile world.

A fifth of the 2017 exhibitors at the London Art Fair were from outside the UK, Throughout the hall were many connections with South Korea, including the galleries Hanmi and Atelier Aki.

The first of the above featured artists including Jaye Moon who was born in Seoul but has lived and worked in New York for many years. She took advantage of the event being in such a capacious venue as the Business Design Centre to spend several hours building an installation.

Focusing on the idea of “nomadic housing” Jaye invited visitors to take part in building her interactive sculptures with boxes of Lego blocks she provided, “and you are welcome to bring your own Lego bricks.”

She called her public art project Building a Shelter Together. The reason for using the toy blocks, she says, is “to reclaim a space, gather people and conjure up a sense of childlike exploration and play.” In her shelters projects, she adds everyday objects such as plumbing pipes, water, buckets, food, plants, curtains, clothes and hangers.  Eventually, the construction is dismantled, and the Lego blocks are donated to charity.

Jaye Moon: ‘Building a Shelter Together.’

Why Lego blocks? They come into play as “an identifiable object from our childhood.” She seeks to encourage people through this participatory art to become more aware of their surroundings. Hanmi Gallery says of Jaye Moon that in her artistic creation, she illuminates the interaction between spaces and places. At the beginning of her art ‘journey,’ she developed interest in architectural design and portable lifestyle, using Lego and Plexiglas. Her ongoing projects are the perfect examples of this, but she is switching her attention to the integration of art and fashion to create a more tangible form of art – the handbag.

Her argument is that art is finding increasing acceptance in fashion and social networking. All her works contain sculptural and architectural elements, and sometimes the result is fashionable handbags. “They present an intimate space, and more importantly, they suggest something like accessories that one might want to carry as a fashionable object. The more art resembles fashion, the more the consumption of art resembles a more popular or practical consumerism.” 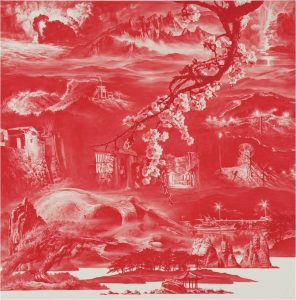 Hanmi Gallery, founded in 2011 in London, says it is “committed to representing emerging and established artists from Korea and East Asia in a global context.” In 2014 Hanmi Gallery opened in the Gangnam district of the South Korean capital “to present British and European artists in the bourgeoning Seoul art sphere. Its vision is to be a resource for artistic movements from Europe in Seoul.”

Making a debut at the Fair was Atelier Aki of Seoul. Among standout works at this booth were the dramatic landscapes of Seahyun Lee. the Between Red series, which has won widespread praise in many European countries. The intricately detailed compositions in oil on linen sympathetically but respectfully rework the delicate aura of the Korean artistic tradition.

The London-based artist depicts, in solely red-on-white, what Atelier Aki says are scenes including “a critical reflection on Korea’s contemporary socio-political panorama.” These even include the touchy boundary between the North and South Korean states, and symbolisms chiefly evident to those who know the peninsula intimately.

Two acrylics by Anita Klein. L’Insalata, and Eleven AM.

The paintings “longingly recall the vistas from his childhood on Geoje Island, off Korea’s southern coast, where the views of beaches, mountains, natural harbours and far-off temples have been altered by urban development,” says Atelier Aki. The topographical unity but political hostility of the representatives of North and South is laid out unsparingly and almost archivally.

It would be hard to surpass this summary by the gallery: “Through his exclusive use of red and the juxtaposition of various symbolic and contradictory references, as if a work of collage, Lee lends the works an uncanny tension and mystery.”

Closer to home, from a UK perspective, are examples displayed by Eames Fine Art of Bermondsey, southeast London, of the acrylics on canvas rendered by the popular and prolific artist Anita Klein. Here we are back to a vision of domesticity and the role of the woman in family relationships.  The woman must needs be strong, as is Anita’s line in these portraits. Eames proudly showed L’Insalata and Eleven AM.

Anita’s art has been described as “witty, charismatic, warm and poignant” but to these characteristics must be added a depth of consciousness of the confidence that her subjects need to handle daily chores and daily challenges.

As with many of today’s leading painters, Anita Klein, who has studios in London and Tuscany, is steeped in the printmaking discipline. She is a fellow and past president (2003-06) of the Royal Society of Painter Printmakers.