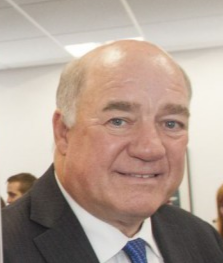 David Glendinning is a Master Mariner with eighteen years at sea with a successful career of onshore experience in many senior positions of ship management, commercial operations, business development and project management. In 2003 David was appointed President of Teekay Gas Services business unit and served in that position until retiring from Teekay at the end of 2015. Under his leadership during the period Teekay LNG Partners became the world’s second largest independent LNG shipowner with total of 50 ships in its fleet including those on order. David was a member of Teekay’s Senior Leadership Team from 1993 until his retirement and he served on the board of SIGTTO (Society of International Gas Tanker and Terminal Operators) for 10 years.

VIMC would like to take this opportunity to congratulate Greystoke Marine Management for their newest addition to their leadership team.

“David is well-known internationally with sophisticated and specialized knowledge in the LNG sector. We are thrilled to see the growth of Greystoke Marine Management in a relatively short span of time and we wish them every success.”, said Kaity Arsoniadis-Stein, Executive Director of VIMC.

Whither container shipping? IMIF is told of “reasons to be cheerful”