New challenge ahead for sailing ‘legend’ 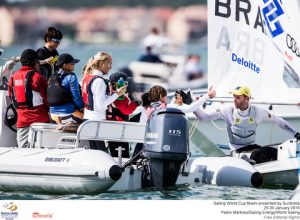 World Sailing’s 2017 World Cup Series in Miami, USA will see a ‘legend’ of the sport take on a new challenge as one of the most successful Olympic sailors exchanges the One Person Dinghy for the Men’s Skiff.

Among the 453 sailors racing out of Regatta Park at Coconut Grove, Miami from 22-29 January

, Brazil’s Robert Scheidt is teaming up with Gabriel Borges in an attempt to master the 49er like he has the Star and Laser.

43-year-old Scheidt is no stranger to sailing in Two Person fleets taking an Olympic silver and bronze medal in the Star, but the High Performance Skiff will present the champion with a different challenge.

The switch from the Laser class, where he has two Olympic gold medals to his name, prompted London 2012 Laser silver medallist Pavlos Kontides (CYP) and former rival to say, “Robert is a sailing legend. To have the strength, will, patience, passion and motivation to continue professional Olympic sailing at this age is really admirable. 49er is completely different from Laser so he will need time to adapt but I am sure he will find his way up the ranks.” 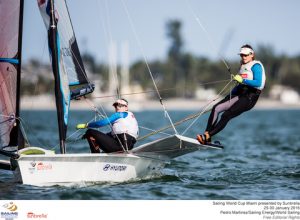 Argentina’s Iago Lange, who will be sailing with his brother Klaus, can see only benefits from Scheidt’s decision, “I think it is great for not only the class but for the sport as a whole. If a hero like Robert is showing that he will keep pushing it is a great message for the world of sailing and for the kids who aspire to be in the sport.”

Reflecting on the decision, Lange gave his thoughts on a personal level saying, “He is one of my sailing heroes so it will be super nice to have the opportunity to sail against him.”

Other sailors who will also have the opportunity to sail against the Brazilian will be Spain’s Diego Botin and Iago Lopez Marra who hold the 2016 Miami 49er title and Austria’s Benjamin Bildstein and David Hussl who took the 2016 Sailing World Cup Final gold in Melbourne.

Winning the inaugural Sailing World Cup Miami 49erFX title in 2013, Brazil’s Martine Grael and Kahena Kunze will be aiming to recapture the title in their first major regatta since taking the Rio 2016 gold medal.

Other Olympians in the fleet are Finland’s Noora Ruskola who is now teaming up with Mikaela Wulff and Nacra17 bronze medallist crew, Tanja Frank (AUT) who also has a new team mate in Lorena Abicht.

Norway’s Helene Naess and Marie Rønningen took silver at the 2016 Sailing World Cup Final and will battle it out with the Agerup sisters, Ragna and Maia, who represented the country at the Olympic Games for national bragging rights.

As one legend of the sport moves in to the skiff, there are some who are also chasing other challenges and moving from the 49er to the Nacra17.

Austria’s Nico Delle-Karth is teaming up with fellow skiff sailor Laura Schöfegger in the multihull and they will be joined by Denmark’s Christian Peter Lübeck who will sail with helm Lin Ea Cenholt.

Lübeck finished fourth at the Rio 2016 Olympic Games in the 49er but sailed the Nacra17 throughout 2015. Delle-Karth on the other hand has only sailed the skiff at major regattas. Miami will pose a challenge for both with seasoned campaigners like Jason Waterhouse and Lisa Darmanin (AUS) and Ben Saxton and Nicola Groves (GBR) on the start line.

Arguably the biggest name on the start list for the Men’s RS:X is double Olympic champion Dorian van Rysselberghe (NED). Not only is the Dutch windsurfer the Rio 2016 gold medallist, he isn’t a stranger to stepping on the Miami podium either with five wins since 2009, including the past two years.

Another Rio 2016 medallist racing will be France’s Pierre Le Coq who has an Olympic bronze medal to his name from the summer showpiece. The only sailor missing from that podium is Great Britain’s Nick Dempsey who has compatriot Tom Squires now looking to carry the British windsurfing baton.

The Olympic champion in the Women’s RS:X comes in the form of Spain’s Marina Alabau Neira who took gold at London 2012. Some other champions in the field are Emma Wilson (GBR) who won the 2016 Aon Youth Worlds in New Zealand, Auckland last month and two-time Youth Worlds champion and Rio 2016 bronze medallist Stefania Elfutina (RUS).

Competitors in the 49er, 49er FX, RS:X, and Nacra17 will have five days of fleet racing from Tuesday 24 January to Friday 27 January with LIVE medal races on Saturday 28 January.