Minimizing risk is key to success on ‘crazy’ Biscayne Bay 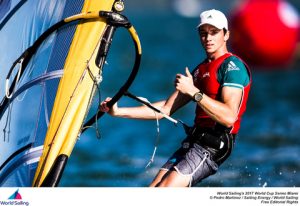 For Swiss RS:X sailor Mateo Sanz Lanz, success on the third day of racing at the 2017 World Series Cup Miami presented by Sunbrella was as much about what he didn’t do as what he did do. In a gusty and shifty northeasterly breeze that moved about like an over-caffeinated flyweight boxer, Lanz finished first, third and fourth in three races.

“Today was really shifty and gusty and during the races there were many changes of positions; it was crazy,” said Lanz, who finished 14th at the Rio 2016 Olympics. “I didn’t know really well what to do, [I tried to] just manage my position with the fleet, be conservative, and not take many risks. You could pass the upwind mark really well but then then you would round the downwind mark with 10 people coming from behind with strong gusts and planing.”

Lanz had a forgettable second day of the regatta, with a 15th, 17th and a U-flag disqualification for being over the starting line early. His complete turnaround, from a results perspective, was all the more impressive when considering that only one other sailor in the top 10 was able to string together three top-10 finishes. He moves up to fifth from 11th.

How tough was it on the water? The regatta leader going into racing, Kiran Badloe (NED), finished 11, 15, 26 in today’s races after not finishing worse than third in the first six races.

Giard’s keys to success in this atypically unstable wind sounds fairly similar to that of Lanz.

“I didn’t try for some crazy perfect start, but then I followed the wind pretty well and did not try any crazy stuff, just doing what I do the best,” said Giard, who has his eyes on the French berth in the Tokyo 2020 Olympic Games, though getting that will mean fending off Rio 2016 bronze medallist Pierre Le Coq, who sits fourth in this regatta.

“The wind was really shifty and sometimes you can have around 12 knots and the other guy can have only four knots, so you have to manage your race all the time to be in the right gust and the right shift. It’s not an easy game, but I played it well today.”

For sailors who found themselves occasionally out of sync with the breeze, it was all about damage control.

British RS:X sailor Isobel Hamilton fought hard all day just to stay in the top 10 in each race. A 4, 10, 9 was well off the 3, 2, 1 she produced on the second day of racing. But considering how much worse it could’ve been, she wasn’t complaining.
“We kind of decided that getting an average in the top five or top six would be a good day because it was pretty unpredictable,” said Hamilton. “I almost did that, so I’m pretty happy.

“The secret to success [on days like this] is keeping a level head. Just because you’ve lost a bit of distance on the upwind doesn’t mean you can’t instantly gain it on a downwind with a gust. Just keep your head and always try to take places.”

With nine of 12 races done before the top 10 are moved into the Medal Race, Hamilton has put herself in a good position to claim a podium spot in the first major competition on the road to Tokyo 2020.

China’s Yunxiu Lu leads the Women’s RS:X with 24 points, with countrywoman Manjia Chen in second with 38. Hamilton has 44 and Marina Alabau Neira (ESP) is just off the podium with 46.

The 49ers got back on schedule with four races, three of which were won by the British duo of Dylan Fletcher-Scott and Stuart Bithell. With a third in the fourth race, they now have a very cozy 27-point lead over second placed Carl Sylvan and Marcus Anjemark (SWE). Benjamin Bildstein and David Hussl (AUT) are third, 13 points further back.

Martine Soffiatti Grael and Kahena Kunze are showing no signs of slowing down after winning gold in 49erFX at Rio 2016. They totalled 11 points in four races today and lead a pair of Norwegian teams—Helen Naess and Marie Ronningen and Ragna and Maia Agerup—by 18 points.

With a pair of wins, Jean Baptiste Bernaz (FRA) pushed his winning streak to three races and his lead in the Laser to seven points over Pavlos Kontides (CYP). Great Britain’s Nick Thompson is third. USA’s Charlie Buckingham is fourth, but just 10 points separate his current position from 10th.

The race for gold in the Laser Radial appears to be a two-woman competition. Vasileia Karachaliou (GRE) leads the class with 13 points while Evi Van Acker (BEL) is second with 14. Mathilde de Karangat (FRA) is third with 37.

Stu McNay and David Hughes (USA) vaulted onto the podium in the Men’s 470 with a third and a first. With 20 points, the defending regatta champions are just two points behind Panagiotis Mantis and Pavlos Kagialis (GRE). Tetsuya Isozaki and Akira Takayanagi (JPN) are third with 23 points.

Consistency has been the name of the game for Women’s 470 sailors Sophie Weguelin and Eilidh McIntyre (GBR). They have finished second in five of six races and, with 10 points, are in first, one point ahead of Afrodite Zegers and Anneloes van Veen (NED). Silva Mas Depares and Paula Barcelo Martin (ESP) are third.

The British are dominating the Nacra 17 class with Tom Phipps and Nicola Boniface in first with 28 points and Ben Saxton and Nicola Groves in second with 30 points. Nico Delle-Karth and Laura Schöfegger (AUT) are third with 34 points.

Jorge Zarif continued his winning ways in the Finn, claiming both of today’s races to open up a six-point lead over Ben Cornish (GBR), who stands on 12 points. Anders Pedersen (NOR) is third with 15 points.

The RS:X, Nacra 17 and 49er sailors will finish their opening series on Friday 27 Januarywhere the top 10’s will be decided in advance of Saturday’s live Medal Races. All other fleets will continue with their schedule with racing set to start at 11:00 local time from Regatta Park, Coconut Grove.

Whatever happened to the Dry Markets and geopolitics…