Navy Day and other Soviet scenes. 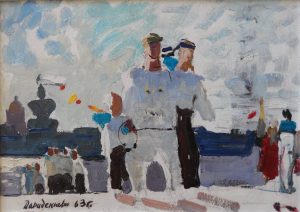 A dwindling band of Soviet-trained artists is finding a wider audience, alas too late for most of them to savour their success.

One of the survivors is Lydia Davidenkova, who after a rocky start in life has been heaped with honours and become highly “collectable.”

Her work On Leave, Navy Day has been on parade in London, in one of the stands at the Decorative Antiques & Textiles Fair in Battersea Park.  Her expressionist take on Navy Day was painted in oil on board in 1963. In the background of jolly sailor activity are St Petersburg landmarks including St Isaac’s Cathedral and the Peter and Paul Fortress.

Born in 1939 in Leningrad to parents who were geneticists, her mother and father were deported to Siberia (they were “lucky” not to be shot) when their theories crossed those espoused by the Stalinist state.  Only the sacrificial care of her family saved Lydia from perishing. She was later to use her brushes to portray researchers from that period.

Many collectors have become astute enough to ignore the stigma that for years was attached to anything smacking of Socialist Realism, which was long considered trite, a condemnation which wrongly spread to anything of other genres from in that era. Nowadays buyers are eager to delve into an era when art in Russia and Ukraine was under the oppressive thumb of the state, given that many skilled and touching works were nevertheless produced. ‘Unwanted’ and neglected paintings are being brought out of the cupboards where they were stored by the painters who had no expectation that their output would one day be in brisk demand, and would command reasonable prices in private sales and auction rooms.

The Newspaper Wall. Oil on board. By Valentina Savelieva.

John Barkes, one of the few dealers who has the experience and contacts to rescue the forgotten gems, has started 2017 with two outings in London showing a wide selection of finds. Following a display at the Decorative Antiques & Textiles Fair at the end of January, he is setting up at Highgate Gallery to put on a show from February 3 to 16 at the invitation of Highgate Literary & Scientific Institution.

Dr Barkes has been working on his quest with members of the Artists’ Union of St Petersburg and their families for more than 20 years.  He has visited more than 300 studios, “sometimes uncovering a lifetime’s work of sketches and paintings.” 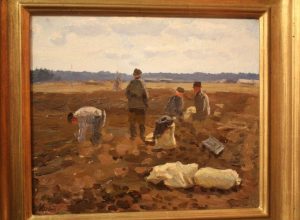 Spud Picking. 1958. Oil on board. By Konstantin Molteninov.

He said: “Often preparatory work for large public commissions, these works are free from the constraints of Soviet Realism, and record life in the Soviet era from intimate family studies to agricultural and industrial scenes.”

The works are, it could be said, free too from the weight of a consumer society. Their themes are taken directly from experience of daily life – not mediated through a context of a dominant big-product commercialism, nor executed with an eye to making a big buck, or big roubles. They are distilled passion for paint, objects and people. As the years pass, this specialisation acquires new dimensions.

In his quest for quiet masterworks, Dr Barkes has unearthed treasures of which sometimes the artists were aware of their potential value, sometimes not. Most would not have imagined their output being put on the block in western-style auction rooms. A viewer of a group of such works in one showroom, enjoys a cumulative perspective of wonder.

Students at the Repin Academy. 1968. Oil on canvas. By Gennadi Maliavin.

Ms Davidenkova among this group (although group is too formal a word) is one who has enjoyed considerable renown. She graduated in 1957 from art and graphic college in Leningrad, and 11 years laterfrom the demanding Repin Institute for Painting, Sculpture and Architecture, later joining the teaching staff, and becoming a member and silver medal holder of the Russian State Academy of Fine arts.

Professor Davidenkova listed participation in more than 200 exhibitions at home and overseas, including special shows at the Russian academy and the Repin Institute. Museums in Russia, elsewhere in Europe, China and other Asian nations and the US have collected her works.

Another outstanding artist is Konstantin Molteninov, born 1924 in Leningrad, and now in poor health. His 1958 oil painting on board of potato picking is typical of his labour and agricultural themes, and he has turned out many works featuring winter sports. His work is recognised internationally as valuable and has commanded firm prices. He was feted on his 90th birthday with a party at the St Petersburg Artists’ Union.

He joined the Academy of Arts college in 1941, and his education was broken off by the war, but returned to graduate in 1953 from the Repin Institute. Noted for depicting the unvarnished truth of war his signature work is included in the diorama The Breakthrough of the Siege of Leningrad in January 1943. He had a difficult relationship with the authorities which meant his talent was intermittently on show, but latterly he has found supporters round the world.

A study for the woodwork class. Oil on board. By Piotr Alberti.

A glimpse of the vast oeuvre of Piotr Filipovich Alberti (1913-1994) is seen currently in A study for the woodwork class. Unlike some of his contemporaries, Alberti started at Astrakhan Art School, before moving to Leningrad and the Russian Academy for Fine Arts. After his studies, he joined the LenIZO Association of Artists, and in 1941, volunteered for the Red Army, seeing service in battles at Leningrad and in the Baltic republics. He suffered serious wounds and was decorated.

The lively colourist was adept at many genres, including life, portrait and nature painting, and travelled within the Soviet Union and to Japan for exhibitions.

Strong colours including cadmium red are wielded by the living artist Valentina Savelieva in The Newspaper Wall. This glorious melange of people is painted in oil on board. Dr Barkes has long been enthusiastic about the abilities of Ms Savelieva who was born 1937 in St Petersburg into an artistic family. She studied between 1953 and 1958 at the Tavrichesky College of Art, followed by the Repin Institute, where she was a popular student and frequently the subject of paintings herself.

She won a prize which enabled her to travel to Italy, and went on to have exhibitions in her homeland, and sell to buyers in many countries.

A bold, large portrait from 1968 of Students at the Repin Academy of Fine Arts comes from Gennadi Maliavin (1935- c 2000). The St Petersburg artist would, presumably like many men and women developing their skills at the Repin academy, ask students to be their models.  The ladies here look slightly uncomfortable, but this just adds to the charm of the outcome, which is oil on canvas. Provenance of this magnificent work is the artist’s widow, Zoya Molodozhenina.