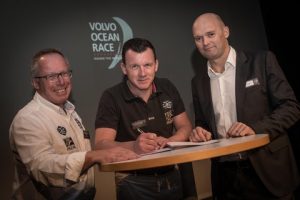 Gothenburg, Sweden, 3 February 2017 – Once again, GAC Pindar and GAC companies around the world will be put to the test by the Volvo Ocean Race. The 2017-18 edition will be the second consecutive time that GAC serves as the official logistics provider for the premier offshore round-the-world race, after its successful collaboration in 2014-15.

The Group’s marine sport and leisure logistics specialist, GAC Pindar, will work closely with GAC offices around the world to provide a wide range of services for the Race which kicks off in Alicante, Spain, on 22 October. That will include customs clearance and transportation of pavilions and hospitality infrastructure, broadcast and other support equipment to Host Cities across six continents.

It will be a repeat of the epic challenge presented by the 2014-15 Race, during which the GAC Pindar team clocked up more than 21,000 man hours working to ensure the smooth delivery of the event. It also played a key role in getting two of the competing crews and their boats back in the Race after disaster struck: assisting in the Dongfeng Race Team mast replacement after it snapped en route for Brazil; and moving Team Vestas Wind’s stricken boat after it ran aground on the Cargados Carajos Shoals near Mauritius.

Since its establishment in 2011, GAC Pindar has become the go-to provider of marine leisure logistics, offering a complete range of services such as yacht transport, superyacht fuels, air ocean and land freight, yacht spares logistics, sailing even management and ship agency.  The announcement of its appointment for the Volvo Ocean Race 2017-18 follows the signing in November 2016 of a long-term deal making it the official provider of marine logistics and shipping services for World Sailing, the world governing body of sailing representing more than 140 member nations. GAC Pindar is also the official logistics provider for the Extreme Sailing Series, World Match Racing and the M32 Series.

“We are thrilled to again be the official logistics provider for this iconic event, building on the success of our collaboration for the Volvo Ocean Race 2014-15,” says Andrew Pindar, partner at GAC Pindar. “This appointment for the second consecutive time sends a clear message about our ability to meet the toughest challenges in yachting. We have established ourselves as a leader in the field, and that reputation is underpinned by the qualities that the GAC Group as a whole, the Volvo Ocean Race and its participants embody – stamina, spirit and teamwork.”

Herman Jorgensen of the GAC Group adds: “Both GAC Pindar and the global GAC Group as a whole value such long-term relationships which draw on past experience and lessons learned to drive efficiencies and cost savings.”

Volvo Ocean Race COO Richard Mason underlines the importance of working with a reliable logistics partner: “As a unique global event working under severe time pressures and facing unexpected obstacles, flexible logistics management is integral to operational delivery of the Volvo Ocean Race. The 2017-18 edition will see the sailors tackle one of the toughest race courses in recent history – and with 12 Host Cities on six continents, we’re facing a challenge on-shore, too.

“Working alongside a world-class, industry-leading player such as GAC Pindar, gives us great faith that we can not only meet those challenges, but over-deliver once again.”

About GAC Group
GAC is a global provider of integrated shipping, logistics and marine services. Emphasising world-class performance, a long-term approach, innovation, ethics and a strong human touch, GAC delivers a flexible and value-adding portfolio to help customers achieve their strategic goals. Established since 1956, the privately-owned group employs over 9,000 people in more than 300 offices worldwide.

About Volvo Ocean Race
The Volvo Ocean Race is the ultimate ocean marathon, pitting the sport’s best sailors against each other across the world’s toughest oceans. The legendary race that began in 1973 will start from Alicante, Spain in October 2017 and finish in The Hague, Netherlands in June 2018. Featuring almost three times as much Southern Ocean sailing as in the previous edition, the Volvo Ocean Race 2017-18 will be contested over the longest distance in the race’s history at around 45,000 nautical miles, crossing four oceans and taking in 11 major cities on five continents.