Position paper of the International Union of Marine Insurance (IUMI)

The deadly fires aboard the ferries “Norman Atlantic” just before New Year 2014 and the “Sorrento” in April 2015, prompted an international response from the UN International Maritime Organization (IMO) in May 2015. The number of fire incidents on ro-ro passenger vehicle decks had already been examined by the IMO Correspondence Group on Casualty Analysis in 2012, noting that there “is no sign of these (fires) diminishing”[1]. This trend is also confirmed through accident analysis performed by the European Maritime Safety Agency (EMSA)[2].

While this paper mainly focuses on ro-ro passenger vessels, similar concerns with fires exist also for car carriers. It is also worth noting that damage to the cargo on these vessels can be significant, although the fire itself may be contained.

Marine underwriters have witnessed that the frequency of fires in the car/ro-ro passenger vessel segment is increasing and is currently at a level twice the frequency of fires on most other vessel types. While cargo on other vessels categories are specifically loaded and packaged for carriage by sea, cargo that is rolled off and on a vessel represents a significant roadside fire risk. Although the risk of fire is substantially lower when a car/lorry is in transit than in operation, the high number of negligible risks could add up to a significant risk. More than one per cent of vessels in the car/ro-ro passenger vessel segment experiences a fire every year[3]. Compared with other causes, fires are often more severe when they occur, resulting in tragic loss of life and costly damage to vessels. Cargo fires are the most frequent type in this segment. 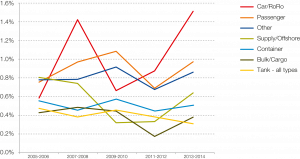 In November 2016, the IMO Maritime Safety Committee (MSC) instructed the Sub-Committee on Ship Systems and Equipment (SSE) to “review SOLAS chapter II-2 and associated codes to minimize the incidence and consequences of fires on ro-ro spaces and special category spaces of new and existing ro-ro passenger ships”, with a target completion year of 2019.

Sources of fire and mitigation

Analysis of available casualty data and maritime accident reports in recent years have identified several sources of fires within ro-ro vehicle decks[5]. A significant number of these incidents have occurred because of electrical fires. The single most frequent source of fires are reefer units, powered by either electrical cable or a dedicated diesel unit. Electrical equipment on board, vehicle cabs and vehicle engines have also been identified as the source in several of these casualties.

Undeclared or misdeclared cargo is considered another notable fire hazard on board.

Although rumoured to be frequent sources of fires, neither stowaways nor passengers/drivers cooking food in ro-ro spaces have been identified as the cause in any of the casualties investigated. 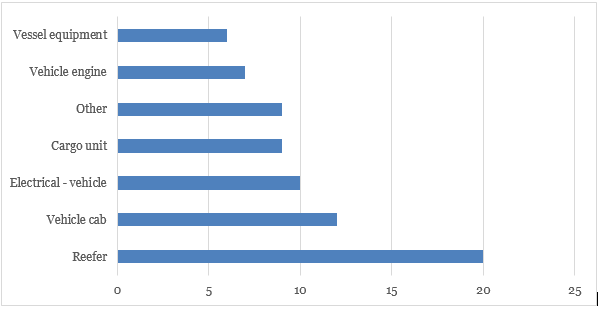 Semi-open decks on ro-ro passenger vessels make fire-fighting challenging due to potential air flow and the fact that cargo is often stowed closely together. This will limit the effectiveness of fire extinguishers, and a fire may spread rapidly as a consequence.

The importance of crew training to allow for a quick and comprehensive fire response is paramount.

The need to deploy drencher systems early in the fire was reiterated in the EMSA FIRESAFE study that was released in December 2016. In March 2016, Interferry released an Operational Best Practice Guidance on ferry safety for ro-ro passenger ships[7]. The key finding of the review was that more attention should be given to response time in the event of an incident.

Marine insurers welcome the initiative by IMO to further review SOLAS chapter II-2 and associated codes to minimise the incidence and consequences of fires on ro-ro spaces and special category spaces of both new and existing ro-ro passenger ships. To mitigate this risk, IUMI favours improved regulation at an international level rather than unilateral or regional action. Given the severity of these fires, IUMI urges an early output of this review.

The rapid growth and severity of fires on ro-ro vehicle decks underlines the importance of crew training in early detection, confirmation and deployment to prevent a fire from escalating. Continuous monitoring with focus on connected reefer units is highly recommended. The enforcement of restrictions concerning general access to ro-ro-decks and charging of electrical cars during transit must be closely supervised. To encourage safety leadership and compliance monitoring, claims history and inspections by costal states should be actively used.

Casualty data clearly indicates that a very high percentage of ro-ro fires emanate from the vehicles themselves, specifically from trailer reefer units, cab fires and electrical and engine fires, rather from the cargo itself.  IUMI strongly recommends that regulators, shippers and operators address the way vehicles presented for carriage can be made safe, thus effectively improving the inherent risk of carrying vehicles on ro-ro tonnage, specifically lorries.

The electrical wiring of the vessel itself has also been identified as a source of fires. IUMI suggests that in particular for older ferries this could be an area for further consideration by regulators, operators and class to ensure up-to-date verification of proper wiring.

IUMI offers to work closely with all stakeholders and regulatory bodies to raise the awareness and mitigate this fire risk.

As marine insurers, we recommend that owners and operators adhere to the Interferry best practice guidance, heed advice from classification societies and ensure compliance with regulations already in place; including:

The International Union of Marine Insurance e.V. (IUMI) is a non-profit association established for the purpose of protecting, safeguarding and advancing insurers’ interests in marine and all types of transport insurance. It also provides an essential forum to discuss and exchange ideas, information and statistics of common interest for marine underwriters and in exchange with other marine professionals. IUMI currently represents 45 national and marine market insurance and reinsurance associations.