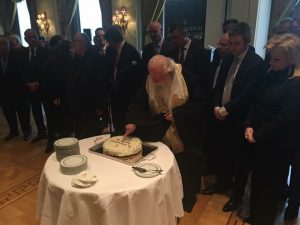 The Piraeus affiliate of the International Propeller Club of the US held its 2017 Vassilopitta ceremony for 2017 at the Grande Bretagne Hotel in Athens on Sunday the 22nd January 2017.

More than 190 guests attended the event which with the cake cutting and the blessing received from the Greek Orthodox Church symbolised good luck for the new year. The occasion saw scholarships formally awarded by the Piraeus club to meritorious students of maritime academies, and students of universities and colleges pursuing maritime studies, and donations were presented to chosen charities.
The president, George Xiradakis, and the members of the board of governors welcomed the representative of the US Embassy, economic officer Brian Hoyt, the Greek Minister of Shipping and Island Policy Panagiotis Kouroumplis, Radm. Stamatios Raptis Commandant of the Hellenic Coast Guard, the former presidents of the International Propeller Club  George Besis,  Savvas Kalafatides, Argyris Skondras and Markos Foros, former governors of the club, Pateras (Father) Damaskinos representative of the Archbishop of Athens, distinguished members of the shipping community including Capt Panagiotis Tsakos and Capt Nikolaos Soutos, and other friends and members of the club.
The minister, Mr Kouroumplis stressed that he is determined to support Greek shipping and together with the government ready to cooperate closely with all those involved. At the end of his speech he expressed the great love that he has for the Port of Piraeus and revealed his hope for better days to come despite the difficult financial situation of the country.
Referring to two donations Mr Xiradakis called to the podium Capt Evangelos Kouzilos, president of the Liberty Ship Club who referred to the special role that Liberty vessels played during World War II and spoke of the Hellas Liberty Museum at Akti Vassileiadou. Propeller Club being an active member of the Liberty Ship Club supports the project to furnish the needs of the ship museum. 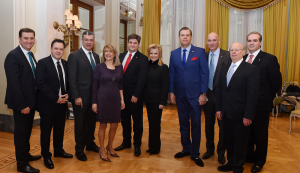 The Board of Directors of the Propeller Club, Port of Piraeus

Mr Xiradakis highlighted the donation made to the Philharmonic Orchestra of the Hellenic Coast Guard under its director Evangelos Kasfikis, for covering the costs of sound insulation. 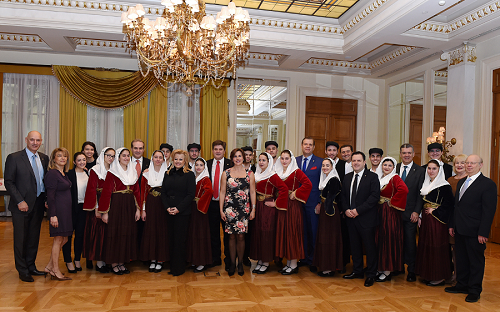 Eleni Irini Kolokythia received the Propeller Club scholarship as the best performing graduate of the University of the Aegean.

Christina Paraskevopoulos, executive of the Financial Department of the Fulbright Foundation received the scholarship on its behalf.
Mr. Lekodimitris Ioannis, graduate of Merchant Marine Academy of Aspropyrgos, was awarded the relevant scholarship for 2016, which was received, due to his serving on board a sea-going vessel at the time of the event, by his father, also an ex-Master Mariner, and his mother.
Capt Tsakos addressing the audience noted that “he holds in high regards the mother of a shipping family for the difficult role that she has to play.”
Xatzina Christina, graduate of Merchant Marine Academy of Aspropyrgos of 2014 received the Propeller Club scholarship.
On behalf of the American Farm School of Thessaloniki, Dr Paschalis Harizanis, graduate of the school and professor at the Agronomy University of Athens received the scholarship thanking the Propeller Club for its contribution and referred to the latest achievements of the school.
Professor Fani Sakelariadou, head of the department of shipping studies at the University of Piraeus, thanked the Propeller Club for its goodwill in supporting the University and expressed her desire for future cooperation.
The governors currently in office who attended the event were Dr Konstantinos Rokkos regional vice-president, Dimitris Patrikios vice-president, Costas Kontes secretary general, John Belousis, Gregory Timagenis, Zoe Lappa Papamatthaiou chairwoman of the fund raising committee,Despina Foros Tsirozidi and Costas Constantinou.
Traditional Greek folk dances from the Dance Group of Pierce College under the guidance of dance professor Katerina Tsioufi were presented to an appreciative audience, with a reception following this most successful event.
International Propeller Club of the US
0 comment
0
FacebookTwitterLinkedinEmail

Aristotle on Rationality in Action