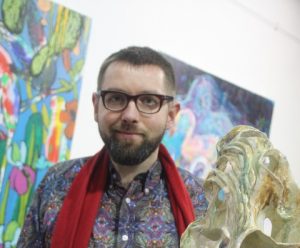 Long live love! Two dozen ways of expressing the elusive and confusing emotion of pleasure and pain are affectionately on show in a new exhibition.

Just ahead of Valentine’s Day 2017, 24 artists from southwest London have been smitten by love, the magician. They explore the compelling and capricious theme over its many aspects in paintings, drawings, prints, textiles, glass, sculpture, ceramics and mosaic, at the Menier Gallery, part of a one-time chocolate factory near London Bridge. 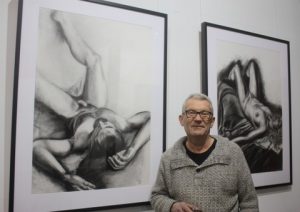 Love’s Labours no 1 and no 2. Charcoal and pastel. By Richard Tomlin.

They filled the capacious gallery (1,475 sq ft over two floors) with imaginative and stunning works. One artist even stirred a satirical Brexit satire into the mix.  What’s love got to do with it, as singing star Tina Turner asked in a 1993 classic.  Well… let us first take a romantically-refined overview.

Ceramic sculptor and painter Ben Nicolas who organised the show, and fellow practitioners living or working in a particularly creative corner of the capital set out the thesis in a manifesto: “Love is at the heart of the human existence. A tender source of joy and happiness, love can declare itself in romantic gestures or simple acts of kindness. 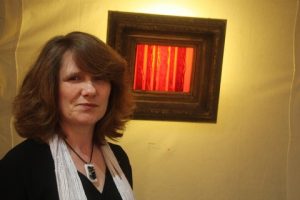 “Love can stir passion and strong emotion, cause sadness and longing, leave us broken and betrayed, hurting and alone. Love can also heal.” Who could put it better?

The artists whose diverse interpretations of the mysterious commodity are revealed here are members of three groups variously from the Royal Borough of Kingston upon Thames, the neighbouring borough of Merton and the surrounding areas. The groups are Hawks Road Artists based at ASC Studios Kingston; KAOS (Kingston Artists Open Studios;) and Merton Arts Festival. 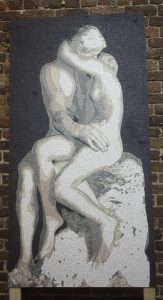 On the ground floor at the Menier are pieces directly inspired by the leitmotif of love, and on the lower floor is a selection of the same artists’ practice linked to miscellaneous subject matter, although much of it can just as readily be related to strong feelings of warmth and intimacy.

Ben’s offerings for the fête de l’amour included the stoneware ceramic sculpture Love’s flowing twists which evoked an enthused gasp from one of the visitors at the preview evening – “this is absolute poetry.” The comment from Ben is that “love is made up of lots of currents which entwine with one another” and this perspective is seen in his frequent referencing of gnarled and twisted roots of trees struggling to grow under harsh conditions. 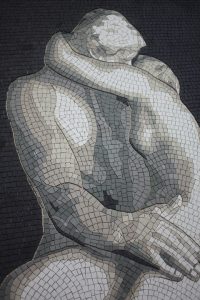 Detail from Kiss by Lawrence Ogden.

The Merton-based sculptor says that the earthy quality in his pieces – hand-built and glazed with metal oxides that react with each other and reflect light to produce organic tones – mirrors the depth and array of colours in the natural environment.  A similar intriguing texturing characterises his honeycomb-patterned bowls.

Richard Tomlin has produced two dramatic, mannerist drawings of repose after a sexual encounter: Love’s Labours no 1 (female) and Love’s Labours no 2 (male). These are in charcoal and pastel, media he likes because they are easy to work with, although he admits: “these works were both labours of love and took many hours to complete. But they are also images that capture the immediate aftermath of passion: satisfaction, exhaustion and loss.” It is unsurprising that he admires the realists Lucian Freud, Andrew Wyeth and Alison Lambert, which led him to focus on the human figure and portraiture. Richard always draws from life models.

Nataliya Zozulya with Speak no evil. Oil on canvas.

A member of the Contemporary Glass Society and a tutor in the speciality, Maria Fagan had on show visually arresting items including Play in fused and slumped glass, and Broken in painted and fused glass. She says: “Through photography and drawing I create two-dimensional images, which are then transformed into glass. Using techniques such as fusing, slumping [slumping is a kiln technique for shaping glass], painting and sandblasting I play with composition, layers and pattern. Planes of colour contrast with intersecting lines and textural forms, creating an interplay of captured light and depth.” Maria teaches creative glass craft for Merton Adult Education.

Lawrence Ogden completed what from a distance appeared to be a large painting but what on closer inspection was an exquisite sculptural mosaic with the title Kiss. At 2 metres by 1.3 metres it was the largest piece in the show.

Working in London and in Ukraine, Nataliya Zozulya, who in her paintings seeks “to convey the moving, tender, vulnerable feminine world using colour, light and shade, and outlines of women’s body,” has a memorable triptych in oil on canvas, illustrating the injunctions of the Three Wise Monkeys: hear no evil, speak no evil, see no evil. 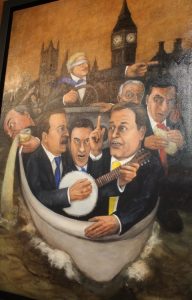 After her graduation from the National Academy of Fine Art and Architecture in Kiev, where she later became an associate professor of painting, Nataliya broke free from the socialist realism orthodoxy she had been taught and became fascinated by among others the renowned portraitist John Singer Sargent, illuminating her path to depicting the subtle world of femininity.

Floral artist Annie Leach, who says her style is “contemporary rather than classic” has acrylics on canvas of Sweet Pea, and Lilies. The compositions appear to endow the spirit of sumptuous blossoms with personalities of beautiful women.

Sweet Pea, and Lilies. Acrylic on canvas. By Annie Leach.

Finally, that Brexit moment. Martin Kerrison’s oil on canvas is entitled Boat trip. It is a hilarious satire recalling the propaganda flotillas let loose on the river at Westminster ahead of the June 23 referendum. “Love them or hate them…” he begins “… a number of well-known public figures [decide] to go for a spot of boating on the Thames.” David Cameron, George Osborne and others including Nigel Farage (seen puking over the side) make up the all-male motley crew, conducted by a presumably self-appointed captain, Boris Johnson in a blindfold. There is no pilot depicted in this allegory. 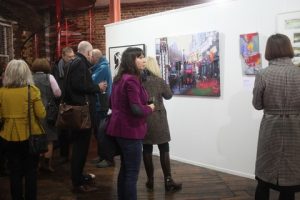 Martin’s own description is as follows: “Boat trip takes its cue from the Hogarthian tradition of raillery (gentle satire). Based on Bosch’s ‘Ship of Fools’, Boat trip features a cast of familiar faces from the contemporary political scene painted in oil on a ‘grand’ scale. The narrative asks more questions than it gives answers and is poised between humour and tragedy, as a very contemporary drama unfolds.

“The vessel has been taken over, perhaps by force or persuasion by those who are deranged, frivolous, or oblivious, and seemingly ignorant of their course.”

After all this high emotion and high jinks, it is soothing to read the words of Carol Hudson, accompanying her woven tapestry exhibit: “The purity of love overlays the complications of life.”

Elements of Love: work by artists from southwest London is at the Menier Gallery, 51 Southwark Street SE1, until February 18 2017, 11am to 6pm except Saturdays until 4.30pm

The Markets and Geopolitics : flotsam and jetsam