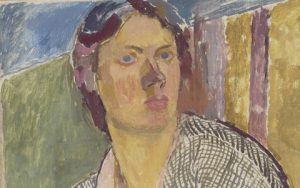 Female strength and compassion in Vanessa Bell retrospective at Dulwich

She was a member of what is sometimes dismissed as a genteel circle of upper-middle class literary and artistic women and men, self-obsessed and with tangled love lives. Vanessa Bell of the Bloomsbury Group deserves far more scrupulous recognition as an independent and courageous figure in 20th century art; and a new exhibition at Dulwich Picture Gallery cogently makes the case. 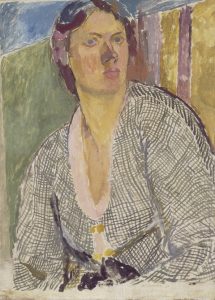 In detailing the alpha and omega of her life’s work, the curators say that Vanessa Bell (1879-1961) is a beacon of female strength and compassion, who was an innovator in the use of abstraction, colour and form.

The exhibition offers penetrating insights into the Bloomsbury Group and especially into the role of Vanessa, who in some versions of the Bloomsbury story is cast principally as the muse to fellow artists such as Roger Fry, and simply as the sister of the brilliant and provocative writer Virginia Woolf.

Vanessa’s reputation even as a British artist – in fact she was strongly influenced by Continental European giants including Manet and Cézanne – took second place in many readings to her family life and romantic entanglements. She appeared to symbolise the idyllic Bloomsbury life first in London and then at Charleston, her farmhouse on the Sussex Downs, where she settled with her lover Duncan Grant. In fact she and those close to her integrated creativity into everyday living – designing their cups and saucers, utensils, wallpaper, tapestries – and throughout motherhood and on holidays. She saw Charleston as a hub of freedom and experimentation, after the conformity and constraints of her childhood. 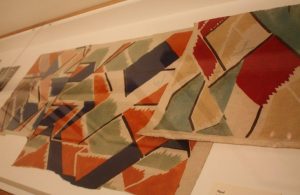 Like her sister, Vanessa had a sensitive social outlook and keenness to innovate. One of her passions outside painting was designing textiles, which she put into practice at the Omega Workshop. This was a collective that fostered contemporary decorative arts in which she collaborated with Roger Fry and Duncan Grant in founding, to provide employment for young artists. 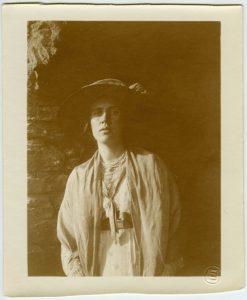 The workshop opened at 33 Fitzroy Square, Bloomsbury, in July 1913, but this was a difficult year as two months later Virginia attempted suicide, and in October four leading figures decamped from the workshop in protest at Roger Fry’s administration and the general aesthetic direction. The venture closed in 1919, but before then Vanessa had conjured up designs for textiles, furnishings and interiors that were as the curators say “evidence of the artist’s lively sense of line and colour.”

She named her textile designs after friends and acquaintances.  One fabric from around 1913, shown at Dulwich, was named Maud after Lady Cunard (1872-1948). Born in San Francisco as Maud Burke, Lady Cunard was a society hostess who later assumed the first name of Emerald. She married Sir Bache Cunard, wealthy grandson of Samuel Cunard who established the shipping line that bears his name. She was 21 years younger than him, and he preferred to live at his country house in Leicestershire while she pursued contact in London in artistic circles. She had relationships with the novelist George Moore and the conductor Thomas Beecham, and was a supporter of Wallis Simpson during the abdication crisis of 1936. Sir Bache died in 1925. 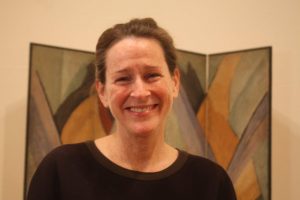 Virginia had a gentle dig at Vanessa for designing clothes that the younger sister wrote were “supposed to be the very boldest taste” andthat “wrenched my eyes from their sockets.” Biographer Frances Spalding described Omega’s vibrant output as “a shocking intrusion upon the English love of prettiness.”

This might partly explain what must have been considered an outrageous design sketched in watercolour, for the bedhead of Clive’s mistress and labelled Nude with Poppies. A pink female nude and breast-like scarlet poppies highlight eroticism and Vanessa wrote to her husband: “I don’t think it’s at all what she wanted.” 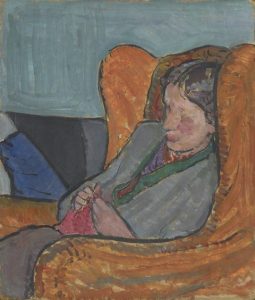 In all, some 100 paintings, ceramics, fabrics and photographs at Dulwich evoke admiration for this marvellous woman, who was so much more than a mere supportive “mother” of the Bloomsbury extended family. She impressed her individual style on portraiture, still life, landscape and the applied arts. She appreciated even simple objects: the still life paintings are as much about the pots as the flowers. The portraiture was on occasion unkind to people she knew well, and even Duncan Grant with whom she was infatuated is pictured from behind, his head possibly in a bowl of steaming water to relieve a cold. To the genres of still life and landscape she brought elements of Fauvism and Cubism. Early on, she experimented with abstraction, echoes of which came through later in her textile designs.

Vanessa was the eldest of four children encouraged to pursue their individual talents, although within bounds. In 1901 she began studying at the Royal Academy Schools, under tutors including John Singer Sargent “one of the technical wizards of all time in art,” said exhibition co-curator Ian Dejardin who is Sackler Director of Dulwich Picture Gallery. She received stimulus among others from the daring avant-garde painter, Walter Sickert. 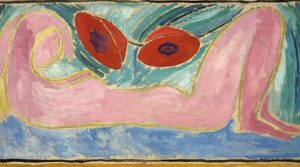 Seeking to broaden their education, Vanessa and Virginia attended classes in Greek and German at the women’s department of King’s College. Following the death of their parents, the siblings moved to Bloomsbury, setting up “rooms of their own” which attracted other artists and intellectuals to a circle which became the amorphous Bloomsbury Group. The Bloomsbury set lacked a firm agenda, but represented individualism and a defiance of convention including tolerance of homosexuality at a time when legal and social prejudices were formally entrenched.

A Room of One’s Own was a feminist essay published in 1929 by Virginia, with a cover as for many of her sister’s novels, from a woodcut by Vanessa. The tract calls for artistic freedom for women and emphasises their right to a full education. As early as 1905 Vanessa had written in a letter to a friend: “the moment one imitates other people, one’s done for.” 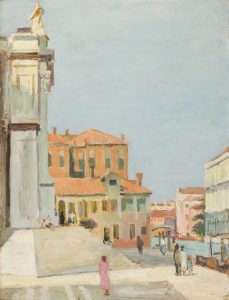 On the Steps of Santa Maria Salute, Venice. (5)

In 1907, Vanessa married the art critic Clive Bell, with whom she had two children. In 1912, alongside Picasso and Matisse, whose oeuvre was a great influence, she had her compositions in the Second Post-Impressionist Exhibition at the Grafton Galleries, London, a show organised by Roger Fry. Just as impressive to her no doubt was a meeting in 1914 in Paris – which she visited often – with Picasso, when she could marvel at his work in his studio.

Two years later she had her first solo exhibition at the Omega Workshop, and went on to exhibit in Paris, Zurich and Venice.  Mr Dejardin said: “No British artist of Bell’s generation so instinctively understood and reflected the radical new artistic developments unfolding in Paris. Her resolute de-skilling, her vibrant embrace of colour, the sheer brutality of her brushstrokes – as if hacking at the canvas with the brush – and her bold rejection of traditional notions of the beautiful, are truly brave and can astonish even today.” 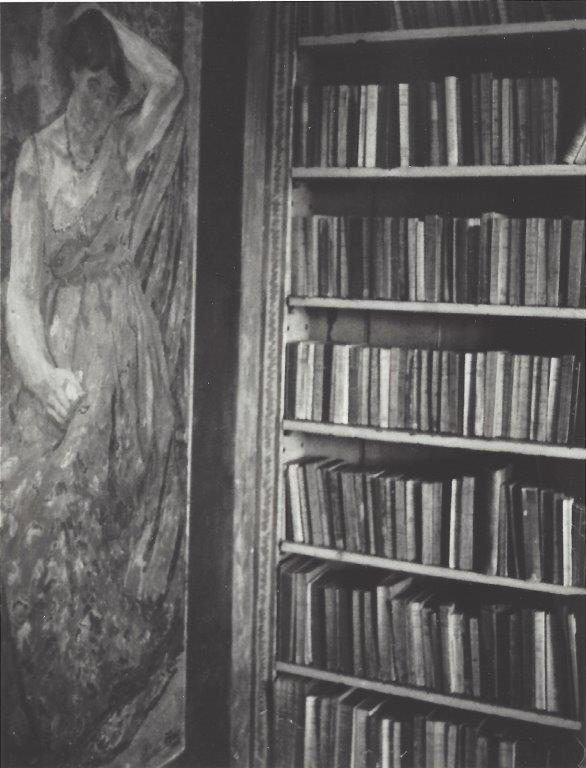 He has curated the exhibition jointly with Toronto writer Sarah Milroy, He said that as a Canadian Ms Milroy could cast a fresh eye on Vanessa Bell’s achievements.

The exhibition opens with portraits of among others Virginia, the writer Lytton Strachey, the poet Iris Tree, Roger Fry, and a self-portrait from the collection of the Yale Centre for British Art.

After a journey through her middle years, there is an evocation in a final room of the modern female spirit as Vanessa asserts her identity but where some pictures reflect a sense of isolation after tragic separations and the deaths of people close to her.

A display in a separate room is entitled Legacy: Photographs by Vanessa Bell and Patti Smith. 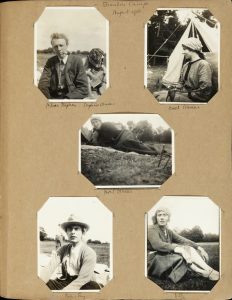 Seven of Vanessa’s albums loaned from the Tate Archives include pictures from her childhood summers in St Ives and of her young sons romping naked, and of some of the intellectuals and artists who were a big part of her life. Black and white Polaroid images taken by the American writer, artist and musician during and following a residency at Charleston in 2003 have an almost ghostly resonance of the inhabitants of around century ago at Charleston and at neighbouring Monk’s House, home of Virginia and her husband Leonard Woolf.

Curator Sarah Milroy said: “Bell and Smith are both free spirits that challenged the times they lived in, and epitomised the ideal of creative freedom.”

She added: “Unconventional in her approach to both art and life, Bell’s art embodies many of the progressive ideas that we still are grappling with today, expressing new ideas about gender roles, sexuality, personal freedom, pacifism, social and class mores and the open embrace of non-British cultures.”

Vanessa Bell (1879-1961), a retrospective, is at Dulwich Picture Gallery until June 4 2017. www.dulwichpicturegallery.org.uk