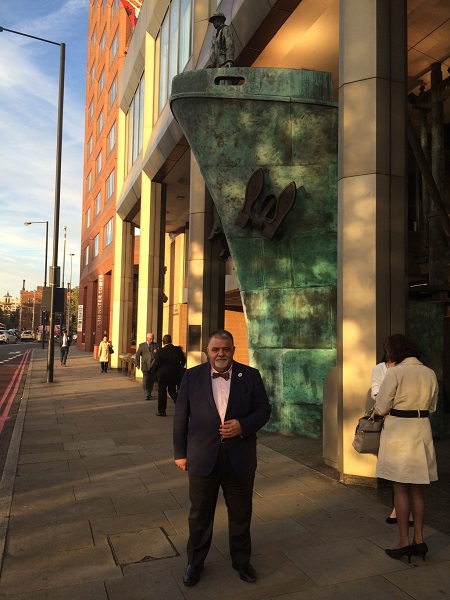 Capt. Antonio M. Padrón in front of the monument dedicated to Seafarers at the Entrance of the IMO

Capt. Antonio M. Padrón, “IMO Maritime Ambassador”, visited the “International Monument to the Seafarers”, which is located at the entrance of the IMO headquarters, in London

The monument, work of the sculptor Michael Sandle, was inaugurated on September 27, 2001.

With seven meters of height and ten tons of bronze it represents the bow of a ship with a seafarer on deck and, given its large scale, has transformed the front of the IMO building and created an important landmark on the banks of the Thames.

The sculpture is not only a monument to seafarers who have lost their lives at sea, but also a recognition of the important role that seafarers play in world trade and its development.

The logo adopted by the IMO for the Maritime Ambassadors Program, is precisely based on this impressive monument which, with its “strong”, “reliable” and “serious” image, incorporates all the qualities that have been demanded to seafarers in all times of history.