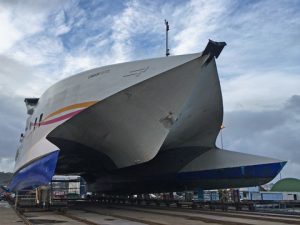 Despite Brexit, business has boomed as the company has completed two refits for Wightlink and one for Condor Ferries at its 5000T syncrolift facility in the French port.

Speaking of the significant refit onboard the Condor Rapide, chief executive Nicholas Warren said: “This valuable order from Condor Ferries demonstrates our genuinely unrivalled skills base and competitiveness in the fast ferry repair market.”

He added: “We have the technical management, knowledge, and perhaps most importantly the passion and integrity to bring something truly unique to the table with regards to fast ferries.

“Our success is down to our people and our experience – our desire to do the best by our customers – all we are after is a fair day’s pay for a fair day’s work.”

Works onboard the Condor Rapide included her five-year special survey, extensive aluminium repairs and renewals, overhaul of her water jets, overhaul of the ride control system and the application of new anti-fouling coatings.

In respect to the conventional tonnage, Ray Cutts, Burgess Marine’s technical director, said: “Supporting the Wightlink fleet in Cherbourg has been a genuine pleasure.

“We obviously refit their fast ferries locally in Portsmouth so this extension of service is a natural development of our long-standing and mutually beneficial relationship.”

He added: “The engineering works onboard the St Faith and St Cecilia included hull UHP and full antifouling, and topside painting.

“The sacrificial sea water pipe work was stripped and rebuilt, the sea valves, opened for inspection, re-seated and reassembled.

“Our team also completed various weld repairs”. Wightlink operates routes between Hampshire and the Isle of Wight in southern England. 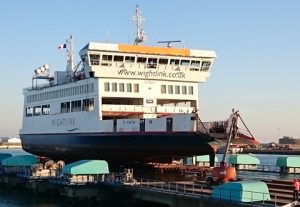 The Condor Rapide is based in Poole in Dorset, and sails to France and the Channel Islands.

Dover-based Burgess Marine operates both the 5000T syncrolift in Cherbourg and the 1000T facility in Portchester, Portsmouth.

It is also the principle commercial ship repairer in Southampton and Portsmouth.

Financial details of the work in Cherbourg were not disclosed.