The Egyptian Maritime Cluster – A concrete plan for the future 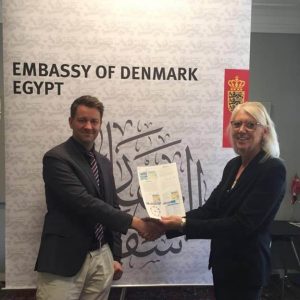 Jacob Faber Silén, First Secretary, Deputy Head of Mission, The Danish Embassy/Cairo (co-initiator of the EMC idea together with Alexandria Chamber of Shipping) and Helle Gleie, CEO, ITOLEAD Consulting – Hand over of the EMC Report.

A report concluding on half a year’s work and three maritime workshops attended by maritime stakeholders has been finalize and has been handed over to the ACS -Alexandria Chamber of Shipping (in partnership with ITOLEAD Consulting) and the Danish Embassy, who joined forces to find new ways to fast launching of a strong Egyptian Maritime Cluster, servicing the whole of the Egyptian Maritime Industry.

What was already obvious after the first workshop in October, i.e. “that a strong plan was developing”, was confirmed and further developed in November, December and January.

The report conclude that the potential for Egypt Maritime Cluster is big and that the ‘low hanging fruits’ are many, and clearly confirm that development is possible within all areas/corners of the maritime industry.
Just a few examples from the list are: Ports, Shipyards, Offshore and Logistic Services,  Bunkering, IT-Technology, Cruise Line, Terminals, Inland transportation, Ship Owning, Education, Fishing and Maritime tourism.

The structure and funding plans to further boost this new maritime focus area are in place, to ensure a long-term and sustainable growth – and so are the key stake-holders.

EMC is supported also by the Blue Valley initiative (where one project is to include EMC in a new global maritime cluster platform), and the new Growth, Development and Project Hub of Egypt (who has offered to host the first secretariat).

Of course nothing is certain, but what can now hold back this new maritime cluster from developing fast and efficiently is hard to imagine – and to conclude that what ACS/ITOLEAD and the Danish Embassy decided to sponsor/move forward with the assistance of Maritime Cluster Expert Mr. Steen Sabinsky (MaritimeBusiness.dk) was a good idea, is obvious.

The Shipping markets “resurface”(?); too messy geopolitics to sustain peace