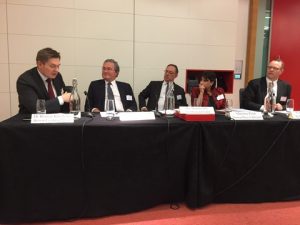 The structure and services provided by various centres of maritime arbitration around the world were discussed by a distinguished panel of international lawyers under the chairmanship of Sir Bernard Eder at a London Shipping Law Seminar on January 30th. The respective attractions and shortcomings of  Singapore, Hong Kong, Russia, India and Dubai were paraded before an audience of 60 maritime professionals at the London headquarters of Norton Rose Fulbright.

Dr Roman Khodykin of Berwin Leighton Paisner explained that arbitration in Russia began in the eleventh and twelfth centuries. Both the former Soviet Union and present day Russia had been relatively sympathetic and co-operative in their approach to international arbitration. The principal basis was the Russian Commercial Arbitration Act, incorporating reforms to various arbitration practices, effective September 2016. 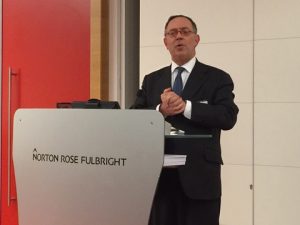 The main driving force behind the Act was to bring in line certain Russian institutions, such as Gazprom, which had incorporated their own rules and arbitral procedures in their contracts. The Act was intended to “eliminate the wrong sort of arbitration.”

The courts in Russia were insisting on the independence of arbitration tribunals with mandatory registration of arbitral institutions and criminal penalties for bodies conducting unauthorised arbitrations.

All corporate disputes were now classed as arbitral in accordance with rules intended to take account of a full range of interests. Institutions conducting arbitration were required to be licensed and to develop arbitration rules with the Ministry of Justice. Arbitrators did not have to have a postgraduate law degree but had to have at least ten years’ experience. 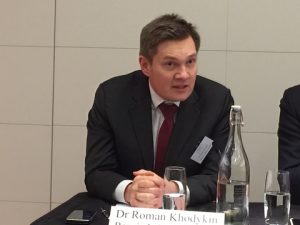 A number of disputes had arisen from the Russian annexation of the Crimea, mostly involving the expropriation of land and other assets. The International Court at The hague had questioned the legality of enforsing arbitral awards resulting from the determination of such disputes.  “We will see how this develops.”

Unlike London, Russian arbitration was not fully equipped to handle really big corporate disputes but was developing the necessary expertise. “Russia is proving that you can get fair treatment through its arbitration process but it does not provide a Rolls Royce service.”

Christopher Style QC praised the arbitration structure and procedures in Singapore, which were supported by government funding. The aim was to make the jurisdiction as attractive as possible. The International Commercial Court offered parties “some of the finest brains in the arbitration world.” This included some distinguished judges who did not hale from Singapore. 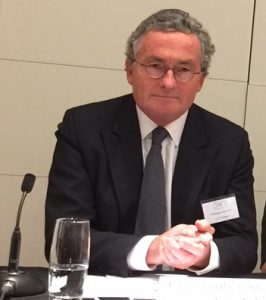 “A lot is always happening in Singapore—-just look at the website.” The Singapore International Arbitration Centre had “risen to the challenge” and published its rules for investment arbitration and provided for energy arbitration.

Singapore had “a global footprint” in respect of maritime arbitration. Its established record of neutrality was very important to its development.

He endorsed the principle of appeal but added that “some cases do not desire too many processes when seeking finality and economy.”  The courts offered “maximum judicial support of arbitration and minimum intervention.”

Mr Style was less than complimentary about the conduct of arbitration in Dubai. In his view, the Dubai International Arbitration Centre’s rules were based on ”a somewhat antediluvian statute.” The unsettled nature of the Dubai Institute was demonstrated by the failure to replace the Director who had left in 2013. The Centre had a “chequered history.”

This judiciary “did not achieve the same standards of excellence” in arbitration as others in more favourable jurisdictions. Further, there was no immunity for lawyers conducting arbitration proceedings so they were liable to prosecution in the events of unfavourable outcomes. In October, new legislation had imposed onerous provisions relating to the duty of care to be exercised by arbitrators. As a consequence, they were sometimes declining appointments and even resigning from ongoing cases as they were unhappy about the risks they were running. 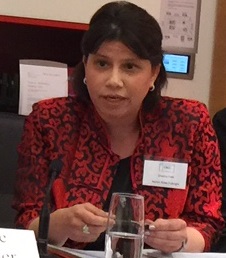 Under DIAC Rules, there was no appeal process. Further, as awards had to be signed within Dubai itself, this sometimes meant arbitrators having to fly in and out solely for this purpose.

Referring to India, Mr. Style opined that there was “huge potential but it would be “a long and difficult ride before it was fully achieved.”

Sherina Petit of Norton Rose Fulbright referred to significant improvements in recent years in India’s provision for structured arbitration. These had superseded an earlier arbitration system which “did not work.” However, there was now a broad appreciation that a properly functioning arbitration system was necessary if the country was to attract more trade and investment.

The Indian Arbitration and Conciliation Act, amended in 2015, had introduced changes in respect of interim relief, public policy considerations, High Court involvement in arbitration and 12-month time limits to determine awards. This was aimed at countering concerns that arbitral awards in India were taking too long. However, the 12 months could be extended by agreement between the parties. “The whole package has been improved. Overall, arbitrators had an incentive to get on with it.” 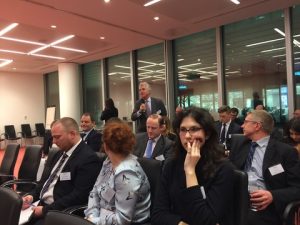 Arbitration awards had to take account of public policy and provide greater clarity about the reasons on which they were based.

The Mumbai International Arbitration Centre’s Rules were approved in June 2016 and the Centre opened for business in October. The aim was to establish a cost effective and transparent process, focusing on procedures for multi-party and multi-contract cases, expedited arbitration and the scrutiny of awards. This was “an excellent development and extremely positive.”

Colin Wright of St. Philips Stone maintained Hong Kong had become a “centre of excellence” for the resolution of disputes.” The Hong Kong Arbitration Ordinance, in existence for two years, was designed to permit only minimum interference from the courts. There was a presumption that proceedings would be held in camera, unless it was adjudged they should be open in the public interest. 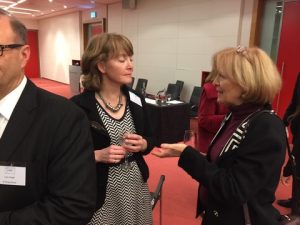 From the drinks and dips reception; Nicola Cox from the West of England Insurance Services and Dr. Aleka Mandaraka-Sheppard, founding director of the LCLC

The Hong Kong International Arbitration Centre did not require Hong Kong legal qualifications for representatives. The Chinese Government had not provided the same level of support to HKIAC, as had other countries to their institutions. However, new rules had been introduced in 2013 to improve efficiency, performance and transparency on costs. HKIAC had handled 1,100 China-related cases since 2003 and had opened a referral office in Shanghai in 2015. It was claimed that between 2010 and 2014, the courts in mainland China had not refused to enforce any HKIAC awards.

As a special administrative region within China, Hong Kong had retained its rights at Common Law. This enabled awards to be set aside if they conflicted with natural justice. This latter principle could not be said to apply in China as a whole. 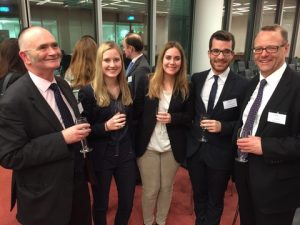 L to r: Robert Gay from Hill Dickinson with young lawyers and students; on the right, Colin Wright from  St Philips Stone

Sir Bernard Eder maintained that London continued to dominate the maritime arbitration scene, with around 3,500 appointments annually, compared with around 30 each for Singapore and Hong Kong.

It followed that the London Maritime Arbitrators Association stood head and shoulders above all other dispute resolution centres. “To talk about arbitration in London is to talk about the LMAA. It dominates the scene. Should it continue as it is or is there a case for institutional supervision? 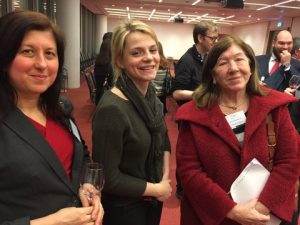 “In none of these other jurisdictions can you appeal on a matter of law. England stands alone in allowing this. If you lose an award, none of the other jurisdictions will allow you to raise questions on a point of law. Any solicitor advising clients as to where to enter into arbitration proceedings in a jurisdiction where there is no right of appeal, would be negligent and subject to being sued for damages.”