SYN-ENOSIS was presented to members of the maritime community 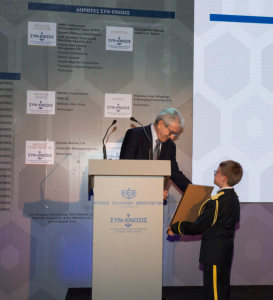 UGS president Theodore Veniamis with a young member from the Philharmonic School of Lixouri Kefalonia,

The Greek Shipowner’s Social Welfare Company SYN-ENOSIS, was presented to members of the maritime community during an event held on Wednesday the 15th of March 2017, at Benaki Museum (Piraeus str. building).

The social support work that the Greek shipping community has traditionally performed on a collective basis was reallocated in 2016 from the Union of Greek Shipowners to the Greek Shipowners’ Social Welfare Company SYN-ENOSIS (www.syn- enosis.gr) created to become a permanent vehicle and a solid reference point for the collective social responsibility of the shipping community. The task of SYN-ENOSIS is to contribute to Greek society through social welfare programmes, support activities for vulnerable social groups, humanitarian and charity projects and public benefit donations.

During his opening speech, Mr. Theodore Veniamis, President of both UGS and SYN- ENOSIS, mentioned that «through SYN-ENOSIS we will continue to support our county and our fellow citizens having the moral satisfaction of giving as well the honor to be an excellent example of responsible citizen, businessman and human, to our children”. 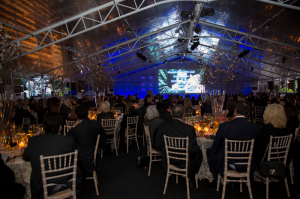 From the dinner during the slides presentation

Participants were informed about the programmes and social welfare activities already implemented on a collective basis, while Mrs. Melina Travlos, UGS Deputy Treasurer and SYN-ENOSIS Secretary, during her speech invited the maritime community to participate to this new invitation of collective social welfare activity and to empower with its active contribution this important project for the country. 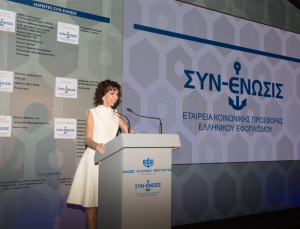 The presence of the Philharmonic School of Lixouri Kefalonia, the historic building of which, was renovated by UGS after the damages incurred during the earthquake of 2014, was a special moment of the event. 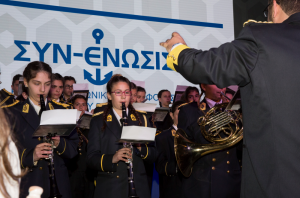 The Philharmonic School of Lixouri Kefalonia in performin

CYPRUS & SERBIA: On a virtuous cycle of sovereign rating upgrades