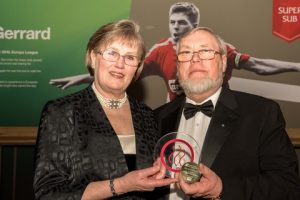 Success in the MMIAs, which took place on 9th March at Liverpool Football Club, marks a significant step in the journey of LEK Lubrication’s business owners Norman and Alexis Lay who, during 2016, took the decision to reposition and grow their 28-year-old company in order to capture new opportunities in the marine and offshore wind sector. The firm is set to acquire limited company status from April this year.

At the third annual MMIAs, LEK Lubrication – one of three finalists for Micro Business of the Year 2017 – was declared the category winner. The award was made in recognition of the effort, progress and potentially bright future of this family-owned business in entering the maritime sector as a new market. The award was presented by BBC Breakfast presenter Louise Minchin, the MMIAs’ regular event host. 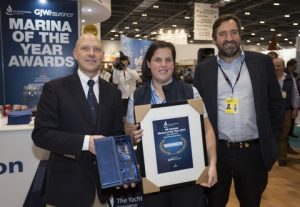 The award win is also testament to the success of Mersey Maritime’s business support programme for small and medium sized enterprises.

LEK Lubrication was introduced to Mersey Maritime in 2016 when the business was at a significant ‘point of change’.  The owners had decided they needed to make a ‘leap of faith’ and expand the business if it was to have a real future after almost 30 years of delivering lubrication systems solely to the vehicle industry. They had identified the maritime sector as a potential new market but lacked contacts and the ability to gain a foothold in this new market without specialist support, which crucially, Mersey Maritime could provide.

Working with LEK’s owners, Mersey Maritime identified a number of priority areas in which it could help the business via its New Markets 2 programme, which is part-funded by the European Regional Development Fund.

LEK Director Alexis Lay said: “We were pointed towards Mersey Maritime in the autumn of 2016 as a body that understands the sector inside out and could help us make the right connections quickly, without endless hours wasted on research and unanswered telephone calls.

“We very quickly became involved in Mersey Maritime’s excellent networks and, via the New Markets 2 support, have been able to move the business along far more quickly than we first anticipated. The possibilities for a business like ours in the maritime and offshore wind sectors are huge and we are keen the make the most of every opportunity.”

On winning the MMIA award for Micro Business of the Year, Alexis Lay said: “Entering the MMIAs was a valuable experience in itself – it made us realise just how far we’d already come.

“When LEK Lubrication was announced as the winner of the Micro Business award, we were absolutely elated. It’s a fantastic accolade and a real boost to morale. It goes without saying that we are immensely grateful to everyone who has helped us along the way so far.”

LEK Lubrication Systems is run by Norman and Alexis Lay, together with their two sons, James and Robert. The business is the sole UK distributor for Beka, the leading German manufacturer of centralised lubrication systems and products. Travelling the length and breadth of the UK, LEK supplies, fits, maintains and repairs the Beka automatic lubrication systems for machinery used across a number of different sectors including haulage, agricultural and industrial plant machinery. Having turned their attention to the maritime and offshore wind sector in 2016, LEK Lubrication’s owners are now also targeting the company’s products and services at maritime applications including dockside equipment, container ports, on board ships and wind turbines.