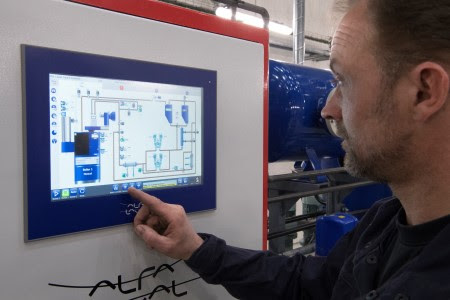 With its graphical touchscreen display and intuitive two-touch navigation, Alfa Laval Touch Control is a major leap forward in boiler control technology. As the new common control platform for all Alfa Laval Aalborg boilers, the system will be a familiar interface for crews, regardless which boiler they work with. Already it can be found aboard a range of newbuilds, and additional deliveries are underway.

“Our boilers themselves have always been at the cutting edge,” says John Pedersen, Manager Boilers & Heaters. “With Alfa Laval Touch Control, we take the same lead in steering them.” 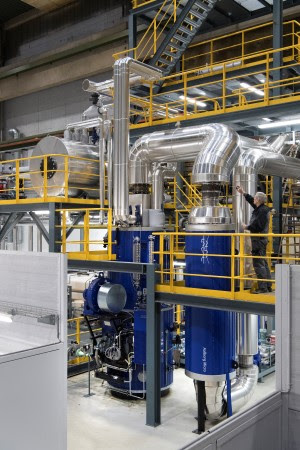 Alfa Laval Touch Control is a tried-and-tested solution. Built with Alfa Laval technology, it has already been proven in the engine room on other marine systems from Alfa Laval. In addition, it is used at the Alfa Laval Test & Training Centre, where it steers the centre’s own boilers and aids the continuous development and optimization of systems for new boiler types.

What Alfa Laval Touch Control offers is entirely new for boilers, as customers who experience the test rig at the Alfa Laval Test & Training Centre quickly recognize. During trainings, the rig is used to show the many ways in which boiler operation can be optimized.

“The system is intuitive and incredibly easy to learn, even for less skilled crewmembers,” says Pedersen. “Two touches of the screen provide access to any setting or function, yet there are user levels and password protection to keep inexperienced operators from making mistakes.”

Intuitive control means easier and better boiler operation. With a complete view of the plant and easy access to all functions, crews can make faster, smarter decisions that optimize boiler use. Supporting those decisions are features such as integrated manuals and user-defined trend pages.

“Alfa Laval Touch Control gives operators an easy-to-use interface with a full graphical overview of the plant,” Pedersen says. “With everything literally at their fingertips, they can pinpoint issues more quickly and easily than ever before.”

Flexible, future-proof and available for retrofit

Alfa Laval Touch Control is PLC-based, which gives it plug-and-play simplicity and high durability in the engine room. With coverage for all major bus interfaces, it is easily connected to onboard communication systems. Likewise, Alfa Laval Service engineers can quickly retrofit it to an existing Alfa Laval Aalborg OL, OS-TCi or OC-TCi boiler, as has already been done on a number of tanker vessels.

In addition, Alfa Laval Touch Control offers the flexibility of firmware upgrades. This will let the system adapt as new needs arise.

“This is boiler control for today’s operational requirements, but also for the future,” Pedersen concludes. “As boiler technology changes and legislation creates new demands, Alfa Laval Touch Control will let vessels and their crews adjust with ease.”