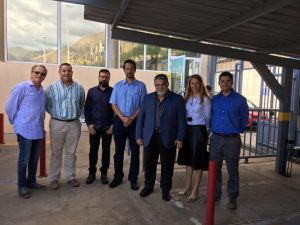 Capt. Antonio M. Padrón (third from the right) with representatives of ODEBRECHT and ALFASHIP

The company has chosen the Port of Tenerife to carry out maintenance repairs on its submersible drilling rig ODN TAY IV.

ODEBRECHT has provided services to the Brazilian oil industry since the late 1950’s, when it began its long-term, trusted relationship with the then newly-created Petrobras.

In 1979, it kicked-off its offshore drilling operations, the first private Brazilian company to provide this type of service in Brazil. In the 1990s, it took its operations overseas, including the North Sea (Scotland), and focused on delivering services and operating an offshore production unit.

In 2006, ODEBRECHT concentrated its investments in oil and gas in a new company, ODEBRECHT OIL & GAS.