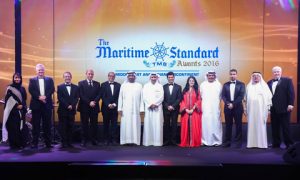 The region’s leading maritime industry awards, officially launched today, are now in their fourth year. They will celebrate and reward the achievements of the best and brightest stars in the industry across the Middle East and the Indian Subcontinent, from the shipping, ports and related maritime sectors, at a glamorous, high quality gala dinner in Dubai

30th March 2017, Dubai, UAE:  The Maritime Standard Awards (TMS Awards) 2017 will take place at the Atlantis Ballroom, Atlantis, The Palm on 23rd October this year. This is the fourth year in succession that the Awards and gala dinner, now established as the leading event of its type in the region, returns to this impressive, iconic venue, aiming to set the bar higher still.

Trevor Pereira, managing director, says, “We have earned a deserved reputation for offering the very best in terms of the value and profile of the Awards and for the integrity of the judging process itself. But we cannot rest on our laurels. So this year we are planning to make the Awards even bigger, bolder and grander than ever before, to ensure we add real value to the industry in this part of the world.”

The glittering event recognises and rewards achievement at the highest level and will be attended by around 700 top maritime executives and decision-makers not only from across the region, but also worldwide. A total of 30 Awards will be presented on the night, including a new one for Superyacht and Passenger Shipbuilder of the Year, reflecting the growing influence of the region in this particular market segment. Of these 22 will be selected by an elite panel of judges, handpicked for their knowledge and experience, while 8 will be chosen by The Maritime Standard team to mark exceptional individual achievements.

Winning an award gives companies and individuals a chance to significantly raise their profile. As Sheikh Daij Bin Salman Al Khalifa, chairman of Bahrain shipyard, ASRY, who won The Maritime Standard Editor’s Choice of the Year Award, says “The high quality of the guests and the audience was truly impressive. I would like to congratulate TMS for the professional manner in which the event was organised, which made it both valuable and enjoyable.”

Entries for the Awards should be submitted by a deadline of August 10th. For information about how companies can nominate themselves for an Award can be access via the website www.tmsawards.com. Table bookings are also now being taken. For more details contact ammaar@flagshipme.com

About The Maritime Standard

A subsidiary of Flagship Events, The Maritime Standard (TMS) publishes a high quality e-newsletter aimed specifically at the shipping and maritime community. It is delivered fortnightly, on the 1st and 15th of every month, and contains up-to-date news and analysis from the shipping and ports industries and related sectors. Topics that are covered include tanker, container, dry and liquid bulk, ro-ro, and cruise shipping; terminal operations; port development; classification; ship repair and conversion; shipbuilding; ship agency; finance and insurance; maritime law; and transportation & logistics. The Maritime Standard is edited by Clive Woodbridge, a journalist who has been writing about the maritime sector in the Middle East for over 20 years.

Another division of parent Flagship Events, The Maritime Standard Events focuses specifically on the requirements of the shipping and maritime sector. The company organises a series of industry-leading conferences and other events under its own brand, as well as for third parties in the shipping and ports business.

The Maritime Standard Awards offers the industry a high profile showcase, to recognise and reward achievements at the top level. It was first held in November 2014, hosted by PR guru, Alistair Campbell, and has since been followed by two more, in November 2015 and October 2016. These were hosted by Dutch soccer legend, Ruud Gullitt, and former CNN anchor Jim Clancy respectively.