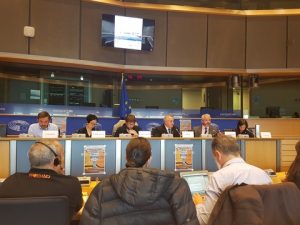 On Wednesday 29 March, CEO David Hammond spoke in the European Parliament to outline the new voluntary ‘Code of Conduct for Search and Rescue Operations undertaken by civil society Non-Governmental Organisations in the Mediterranean Sea’ and to urge European institutions to better support lawful humanitarian efforts by NGOs. This was part of a series of MEP, academic and NGO presentations addressing the issue of criminalisation of humanitarian aid in the Mediterranean region.

Human Rights at Sea, along with attendee representatives of civil society Search and Rescue (SAR) NGOs and the International Maritime Rescue Federation (IMRF), came together with the support of MEP Miguel Urban because of the on-going humanitarian crisis on Europe’s southern borders and the consequent SAR NGO efforts to save life at sea.

The focus of the Brussels meetings was the understanding and agreeing of the means and methods of addressing unsubstantiated accusations of unlawful conduct by and criminalisation of SAR NGOs in the Mediterranean region, which if allowed to continue unchecked, endangers lawful SAR NGO activities to such an extent that the issue can no longer be ignored.

Further, in order to develop and refine professional SAR NGO operations, all attendees agreed the objective and intent of the First Edition of the voluntary ‘Code of Conduct for Search and Rescue Operations undertaken by civil society Non-Governmental Organisations in the Mediterranean Sea’ on the basis that the Code aligns with the three core areas for undertaking lawful SAR operations, those being; following accepted international humanitarian principles, defending fundamental human rights and the professionalisation of operational conduct. The attendees agreed to further refine the First Edition.

David Hammond commented: “The voluntary coming together of so many civil society NGOs alongside MEPs, researchers, academics and several African migrants who themselves had made that terrible journey, underscored the critical importance of co-ordinated and professional responses to the humanitarian crisis in the Mediterranean. It was therefore disappointing that FRONTEX failed to attend either the meetings or the Parliamentary session having previously publicly asserted that SAR NGOs have been engaged in potential criminal activities with criminal networks and which was vigorously denied by all attending organisations.”

NGO attendees seek that any further unsubstantiated accusations of unlawful conduct by SAR NGOs cease immediately without the presentation of substantiated evidence, and that going forward, SAR NGOs have free, fair and open dialogue with all applicable European institutions on the positive integration of SAR NGOs into humanitarian rescue efforts at sea.

This supports the attendees overall goal to encourage international governmental and non-governmental organisations to remain focused on the humanitarian task of ensuring that all people in distress in the waters of the Mediterranean can be saved.

David Hammond stated that: “Without respectful dialogue and direct engagement between State and non-State actors, the ultimate consequence is a failure to effectively save life at sea. Further, the attempted criminalisation of ordinary people undertaking genuine and extraordinary humanitarian roles is quite simply, wrong.”

Download the First Edition of the Code of Conduct: https://www.humanrightsatsea.org/wp-content/uploads/2017/03/20170302-NGO-Code-of-Conduct-FINAL-SECURED.pdf

Markets drop and Geopolitics are a major liability…