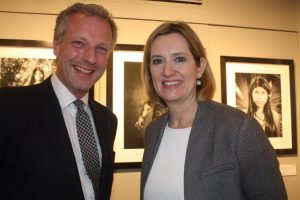 An extensive photographic portfolio lending insight into the lives of the first nations of Panama has been the official launchpad for a charity supporting their wellbeing and environment.

Royal photographer Hugo Burnand brought the Panama Wildlife Conservation Charity to public attention with two London events: an exhibition of his studies of indigenous people at the Victoria and Albert Museum, and the transfer of the display for three days to the Sladmore Gallery in Bruton Place, near Berkely Square. 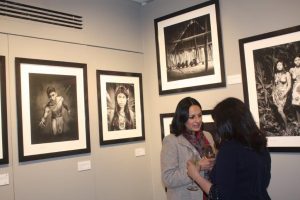 At the Sladmore Gallery private view.

The initiative sought to raise awareness of the charity, which the photographer set up in conjunction with Luis Ureña, a Panamanian-born London biologist, after the two men spent four weeks in each of the last four years in the rainforests of the central American nation.

Such areas are home to six indigenous tribes who are the natural guardians of lands which are a hotbed of diversity – home to 453 species of amphibians and reptiles, 259 of mammals, 976 of birds, 1,377 of fish and more than 10,000 types of trees. Panama – which has an area slightly smaller than Scotland – has more species of trees and birds than in the US and Canada combined, says the charity. That is the result of the emergence of the isthmus 3m years ago which allowed the interchange of plants and animals between South and North America. 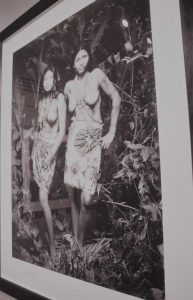 The charity reasons: “Preserving the tribes along with their ancient cultures and traditions will help us to protect these unique ecosystems, all of them vital to the health of our planet and whose many secrets we are continually discovering.”

A formal welcome for the UK-registered charity was extended by HRH The Duchess of Cornwall during the reception at the V&A, on March 27 2017.

Personalities from government and diplomatic circles from the UK and Panama, and leading business and administrative representatives including those from the maritime sector, were among guests attending the private view events. A large crowd at the Sladmore Gallery included British Home Secretary Amber Rudd, who previously was secretary of state for energy and climate change in the Cameron government. 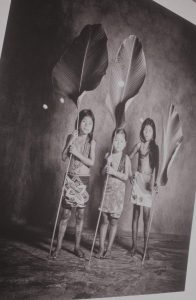 Sales of prints of the photos have been brisk. Dr Ureña said: “It was a very successful evening for both the V&A and at the Sladmore Gallery. Hugo’s photographs have been well received by artists, collectors and private investors to the point that in total, we have raised more than £200,000.

“We have been humbled by the generosity of all the people attending our events, including our patron for the launch event, Her Royal Highness the Duchess of Cornwall.”

Mr Burnand is noted for among other assignments photographing the wedding of Prince Charles to Camilla Parker Bowles, as the Duchess of Cornwall was then known, and the wedding of Prince William to Catherine Middleton (the Duchess of Cambridge).  He was made photographer by royal appointment to the Prince of Wales in 2013. Among other subjects who have been before his lens were international figures as diverse as Michael Jackson and Lucian Freud.

The photographer’s passion for Panama began by chance when he first visited in 2013 and saw clearly that the forests were a vital part of the biological corridor connecting two continents. Tragically during the four years of his visits “the jungle has diminished, almost in front of his eyes,” said Dr Ureña. The unique landscape and unparalleled biodiversity is at risk, the duo warn, and unchecked development would destroy habitats, eliminate species and diminish livelihoods. 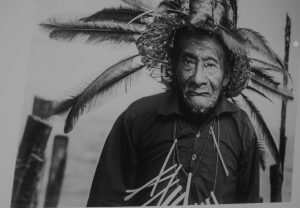 Dr Ureña, who set the wheels in motion for Panama Wildlife Conservation in 2015, graduated at Imperial College London in molecular biology.

Among the photos, one entitled Elviria and Marcolia shows sisters belonging to the Emberá people wearing skirts known as parumas wrapped at the waist. There are said to be 33,000 Emberá (once known as Chocó or Katío) people in Panama and 50,000 in Colombia. Traditionally they lived by river banks, although most now reside in villages or towns. The Emberá people paint parts of the body with black dye, known as jagua tattoos.

From Soledad Miria Island, Guna Yala, we see a grandmother with her daughter and grand-daughter.

These are Guna people, many of whom live on small islands off the coast of Kuna Yala, formerly known as the San Blas Islands. The Guna are renowned in Panama for their colourful patterned textiles, blouses and purses known as molas. A sizeable community tries to make a living by selling such work in Panama City.

A further photo shows the gnarled face of a medicine man wearing a hat decorated with pelican feathers and a necklace of pelican bones.  He is from Gardi Sugtupu, a densely-populated island off the coast of Kuna Yala.

Panama Wildlife Conservation Charity (www.panamawildlife.org) is a non-profit organisation dedicated to the conservation of Panama’s natural resources, the protection of biodiversity and the study of endangered animal species. The charity works with residents and partners on local conservation projects. Main activities are enabling and promoting scientific research, including collaborating with university students from Panama and internationally.