Admiral Peter Brady is made special envoy to IMO 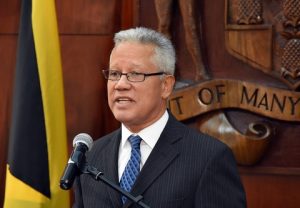 Following his appointment Admiral Brady will lobby for Jamaica’s candidature to Category C of the IMO Council.

Admiral Brady has a wealth of experience to help in his newly-appointed role, having been the chief technical delegate for Jamaica at the IMO for a number of years.

He also sits on the Board of Governors of the World Maritime University as Vice-Chairman, has previously chaired the sub-committee of the International Convention of Standards of Training, Certification and Watchkeeping (STCW) for ten years, and he was recognised with the 2015 Seatrade Award in London for his contribution to global maritime education and training.

Following his appointment, he said: “I am delighted and honoured that the Government of Jamaica has appointed me Special Envoy for Jamaica, as we seek to be elected to the IMO Council.

This is a welcome opportunity for myself and Jamaica for our candidature. Jamaica has always been supportive of the IMO having held a seat on the Council for five consecutive biennia, 2008 to 2009; 2010 to 2011; 2012 to 2013 and 2014 to 2015. Jamaica has consistently represented the interests of not only our country and the Caribbean region, but also those of Small Island

Jamaica has progressively developed its maritime infrastructure, which comprises container, cruise and bulk cargo ports. Maritime administration, ship registrations and the training of seafarers and shipping personnel, all feature prominently in Jamaica’s maritime activities. The country has a vested interest in port, flag and coastal State standards and has been actively supporting the IMO in these areas.

As newly-appointed Special Envoy for Jamaica, Admiral Brady attended the Crans Montana Forum in Morocco, where he participated in a panel discussion on “Africa in the New World Maritime Economy: Hopes and Concerns.”

In this session he discussed how Jamaica has used its geographical position in the Western hemisphere to capitalise on the maritime opportunities at the crossroads on international shipping trade.

He said: “African States should try to have a presence at the IMO to be able to participate in the rule-making process for regulating ships so that their particular interests would also be served. Train their own people to properly carry out the duties of port State control and actively participate in the Port State Control MOUs in Africa, the Mediterranean MOU in the North, along with the West Africa MOU and the East Africa MOU. “

Health and Safety Champions are shortlisted for International Safety Awards 2017