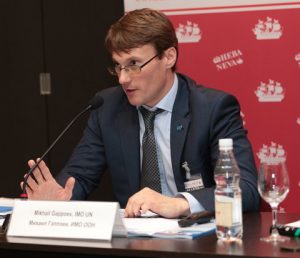 Momentum is building towards the most successful NEVA St Petersburg of recent times, after the organisers of the International Maritime Exhibition and Conferences for NEVA 2017 disclosed exhibitor uptake for the event is significantly outpacing expectations.

With less than six months before Russia’s capital of the North plays host to NEVA 2017, between 19-22 September in the new Expoforum Convention Centre, exhibitors are rapidly taking up the 26,228m2 of available space for the biennial event, according to Matthew White, General Director, Dolphin Exhibitions.

“Overall exhibition bookings are running 10-12% ahead of 2015, with both international and domestic demand moving forward,” Mr. White said. “The 2017 increase is in line with the global maritime industry’s positive response to Russian market opportunities.” With Pulkovo International Airport nearby, the Expoforum facility is amply equipped to cater growth of an event which, in 2015, attracted 15,000 visitors and 538 participating organisations, he added.

Behind the headlines, Russia’s shipping, shipbuilding, ports and inland waterway industries are in the midst of profound change and significant upgrade, with restructuring and new opportunities making 2017 a watershed year. Business highlights include the renewed bid to privatise Sovcomflot, with potential investors doubtless noting the company’s International Arctic Forum projection that the 6.5 million tons moving via the Northern Sea Route in 2016 will triple by 2020. Fulfilling Russia’s maritime ambitions is now also bound up with Federal Law No. 488-FZ “On Industrial Policy”, in force since on June 30, 2015, which encourages and incentivises international partners to set up production inside Russia. Shipbuilding, engineering and electronics are among the sectors identified.

Technical highlights in 2017 are focused on LNG. Last month, Sovcomflot took delivery of the world’s first icebreaking LNG carrier Kristof De Margerie from Daewoo Shipbuilding & Marine Engineering (DSME), for the Yamal project – the first of a series of 15 ships. As part of its collaboration with Shell, meanwhile, Sovcomflot ordered the world’s first (four) LNG-fuelled Aframax tankers from Hyundai Heavy Industries in March. Elsewhere, an agreement for Russia’s largest passenger port, ‘Marine Facade’ in St Petersburg, will see LNG Gorskaya lead a project to bunker LNG for cruise ships and ferries.

Among this year’s stand-outs in the NEVA 2017 exhibition halls will be a new Pavilion for Rostock Business, adding to German interests spearheaded by returnee VDMA (the German marine equipment association). Also returning are Pavilions for the Netherlands, Poland, Denmark and China, while Istanbul Exporters Associations take a 200m2 Pavilion.

Innovation Norway, the Norwegian-Russian Chamber of Commerce and the Norwegian Russian Consulate will occupy a new Norwegian National Pavilion at NEVA 2017. Its creation reflects the urgent need to modernise Russia’s fishing fleet and ancillary services, with 10 of the 18 companies present active in either building or fishery fleet equipment. Norway’s role was acknowledged in March, after the third 50.6m boats built to a Skipskompetanse design was delivered by Baltic Shipyard Yanmar, and NRCC ran a St Petersburg forum bringing fishing industry buyers and Norwegian suppliers together.

Finnish interests will also be out in force at NEVA 2017, drawing on skills and experience in ice-going vessels. Vyborg Shipyard launches Andrei Vertitsky in May, the second 121.7m length icebreaking support ship built to the Aker ARC 130 design for Gazpromneft’s Yamal operations in the Gulf of Ob. With more than 80% of ship equipment in Russia imported, almost half comes from Finland. As recently as last month, Rosneft and Finland’s Lamor Corp agreed to study producing oil spill response equipment in Russia for the arctic on the basis that 70% of production will be ‘localised’ by 2025, with manufacturing to be done at one of the shipbuilding facilities being developed with Rosneft participation.

Strong Chinese participation at NEVA 2017 is also opportune, at a time when relations with Russia are quickly ramping up, especially in the energy sector. Delivery of two 100 ton cranes to Russia’s new Zvezda mega-shipyard in March was exemplary, in a contract between Far Eastern Plant Zvezda and China Heavy Industry Corp Nantong. Meanwhile, Rosneft and the China National Chemical Company (ChemChina) have agreed to jointly build Russia’s largest marine coatings plant at Zvezda. Zvezda will become the largest civil shipyard in Russia, with Rosneft set to be its first customer after ordering four ice-class support vessels.

Offshore prospects remain fragile short term, but NEVA 2017 provides opportunities to reflect. Russian Energy Minister Alexander Novak told delegates at the recent International Arctic Forum that Russia could wait for oil prices to hit $70-$100/bbl before resuming Arctic drilling. Analysts at Morgan Stanley have forecast that it will be the end of 2019 before the lower price is reached. Russia plans to boost exploration in the Arctic Barents and Kara seas from 2019, said Novak.

More immediate action is occurring inland where, 2017 will be pivotal for Russia’s waterways and ports. Intensive dredging of the Volga is rapidly clearing the way for larger vessels, while some believe only 10% of Russia’s river ports will survive privatisation to be rebranded as Port-Centric Logistics hubs. Several of the conference sessions at NEVA 2017 are being organised by Makarov State University for Sea and River Transport and the Russian Chamber of Shipping.

Also in transition is Russia’s shipbuilding sector, where collaboration is proving key to modernisation. Prime Minister Dmitry Medvedev said in March that, since 2014, commercial shipbuilding production in Russia had grown by 11%. Continuing government support is signalled by the setting aside of 400 million Roubles for the 2017 recycling budget – available to owners scrapping old vessels as part of newbuilding plans.

Taking these developments together with the positive outlook for conference sessions and the NEVA 2017 exhibition, Mr. White renewed Dolphin’s invitation for potential sponsors to take up remaining opportunities, adding that “only attendance by international media partners will allow them to see the reality of Russia’s maritime sector for themselves”.

About NEVA 2017
NEVA 2017, The 14th International Maritime Exhibition and Conferences of Russia is held in St. Petersburg from 19-22 September 2017.