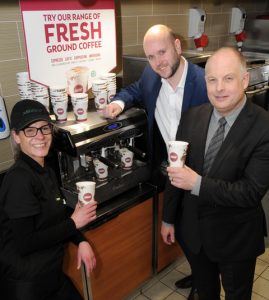 Coffee machine manufacturer Fracino has produced and launched a second bespoke machine for SUBWAY® stores in the UK and Ireland.

The SUB1 was designed to meet the changing needs of Franchisees and is installed in over 500 sites across the UK, Ireland and Poland. The SUB2 is a state-of-the-art espresso machine which delivers the convenience of a ‘bean to cup’ fully automatic machine with the simplicity of traditional espresso machine and has the capacity to produce two drinks simultaneously.

Over the next few months around 40 machines are expected to be operating in sites across the UK and Ireland.

Fracino’s raft of accolades for the SUB1 include a Silver ‘Smart Product’ award from the manufacturer’s association, the EEF, in 2016 and the 2016 Made in the UK Advanced Manufacturing Innovation Award, which acknowledged the manufacturer’s innovation, creativity and speed in designing and supplying the machine.

Commented Richard Mills, Equipment Support at IPC Europe, “For both the SUB1 and the SUB2, Fracino conducted a rigorous development and testing process – taking an adaptable approach with the design and working effectively with us to develop bespoke machines that meet SUBWAY® Franchisees’ requirements.”

Fracino’s 58-strong team produces over 5,000 machines annually and exports to over 70 countries.

Fracino MD, Adrian Maxwell, concluded: “The success of SUB1 has been tremendous, and we were honoured to be asked by IPC Europe to produce another bespoke machine for franchisees in sites which require thousands of cups of coffee on a daily basis. The SUB2 launch has been smooth and successful and our powerful partnership with IPC Europe continues to go from strength to strength.”

Established in 1963, the family owned and run business is home to three generations of the Maxwell family. Founder Frank is the company’s chairman; his son Adrian is the MD, Adrian’s wife Marion is finance director and their daughter Rebecca is the service support manager.

For more information about the SUBWAY® brand please visit www.subway.com.