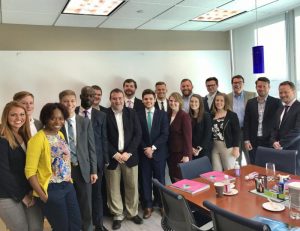 Hamilton, Bermuda, April 23, 2017 – An American university has chosen Bermuda as its domicile for the first known student-run captive insurance company.

Students enrolled in the Davey Risk Management & Insurance Program at Butler University’s Lacy School of Business in Indianapolis, IN, were granted licensing approval from the Bermuda Monetary Authority (BMA) this month to launch the captive, which will self-insure a variety of risks for the university, including its celebrity mascot, a bulldog, and its fine art collection. MJ Student-Run Insurance Company Ltd, to formally open for business this August, is believed to be the first of its kind in the world.
“We’re the first university I know of to have a student-run captive,” said Zach Finn, Clinical Professor and Director of the four-year programme he helped launch in 2012. “Other universities have told us we’ve now disrupted the market-that we are basically akin to the first finance programme to have students manage an endowment. Many believe that in the next 20 years, this will be the standard for insurance and risk education.”
Butler students and faculty received the news from the BMA this month during a five-day visit to the island in which they also met with members of industry and the Bermuda Business Development Agency (BDA).
“Butler’s recognition reaffirms the fact of Bermuda’s top-tier qualities; its independent analysis validates what many in the risk solutions industry have long determined,” said BDA CEO Ross Webber. “The students’ research and application is a wonderful endorsement of Bermuda’s strengths, responsiveness and robust, agile regulation. These attributes have made our jurisdiction the world’s leading captive domicile for several decades.”
Students also met with service providers Aon, KPMG and Conyers law firm, companies they had selected to work with to create, launch and manage the captive.
“It has been a privilege to partner with Butler University and assist with the formation and management of what is believed to be the first US student-led insurance company,” said Anup Seth, Managing Director of Aon Insurance Managers Bermuda.
The project took shape at Butler last year when Professor Finn, who previously worked as a risk manager and risk analyst, assigned students an objective comparison of insurance domiciles both in the United States and overseas. Two groups of students each were assigned five competing markets for which they conducted analyses on capitalisation, premium and excise taxes, and other standard comparisons. Finn then asked them to contact the regulators of each domicile to check responsiveness. “Bermuda and Vermont were the only two domiciles that got back to us-within four hours,” he said.
Students ultimately made Bermuda their top choice because of its mature market and sophisticated infrastructure. In a captive feasibility study, they noted “Bermuda is the oldest and most established captive domicile in the world” and “one of the largest international markets for insurance.” They added: “The main advantage that sets Bermuda above [other domiciles] is the regulatory environment…and the access to professional infrastructure. The regulatory environment is robust, yet flexible, as the regulation is risk-based.”
“The opportunity to have our students come down here and interface with a large swath of the global reinsurance market is unbelievably powerful,” said Finn, whose team then worked with Conyers to set up the captive as a legal entity, did an RFP for a captive manager, selecting Aon, and worked with KPMG to develop five-year pro-forma financial statements.
“We identified risks we might want to write and underwrote those. We identified loss-control recommendations and specimen policies and talked about rating and audit, and just everything,” said Finn. “I’m a big believer that all business education should be a mix of academic and experiential.”
Bermuda is the top global captive jurisdiction, home to close to 800 captive insurance companies, supporting primarily Fortune 500 corporations in the US, and generating over $55 billion in annual gross written premiums.
“Butler’s student-run captive concept is an extremely innovative idea,” noted Eric Heinrichs, Managing Director, KPMG Bermuda.  “It’s no surprise they’ve identified Bermuda as the best domicile for their captive, and I’m very excited to be working with this great group of students.”
“Conyers is very excited to work alongside the students and staff of Butler University. The Butler team is both knowledgeable and energetic, which has made it a pleasure to work with them on this very hands-on initiative,” said Conyers Associate Jacqueline King. “We look forward to continuing to work with them.”
The Bermuda captive will insure the school’s mascot, celebrity English bulldog Butler Blue III, nicknamed Trip, which has 20,000 Twitter followers, as well as Butler’s bomb-sniffing dog, Marcus. It will also cover all other student-run start-ups at the university and Butler’s fine-art collection.
“This was the coolest project I have been a part of in my four years at Butler,” said Brad Weber, 22, who, after graduating next month begins his first job-as a risk analyst with a manufacturing multinational serving the aerospace industry.
“This captive was formed to change the way insurance is taught in schools and help alleviate the current talent crisis in the insurance industry,” he said. “It’s already serving that purpose.”
BermudaBermuda Monetary Authority (BMA)Butler UniversityIndianopolisLacy School of BusinessUSA
0 comment
0
FacebookTwitterLinkedinEmail