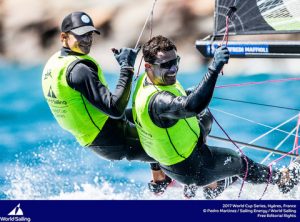 In the first of two live Medal Race days, France’s southern coast was blessed with glorious sunshine. Coupled with an 11-13 knot breeze from the west, the day was virtually perfect.

As the Medal Races played out, there was also fighting for the top ten positions in the one person and two person dinghies ahead of Sunday’s live final day of racing.

Spain’s 49er team, Diego Botin and Iago Lopez, had the luxury of knowing that whatever happened in the Medal Race the gold medal was theirs. With an unassailable overnight lead, even with the double points on offer in the final race, they could not be beaten. 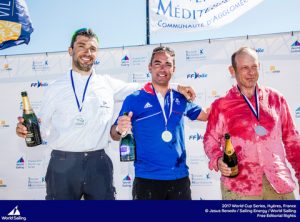 Reflecting on the impressive win, skipper Botin said, “It’s been a really good week for us. We hope every time we come in to a Championship that we will be in with a chance at the end of the regatta and this time around we were really surprised that we were top with a day to spare.”

Digging deeper to find their secret to success, Botin confirmed a simple fact of sport, “It was a lot of things. But it really came down to yesterday when we sailed well and everyone else didn’t.”

Holding on to silver was Dylan Fletcher-Scott and Stu Bithell (GBR) who finished third in the Medal Race. The bronze medal went to Sweden’s Carl Sylvan and Marcus Anjemark who just needed to stay ahead of nearest rivals Yago and Klaus Lange (ARG) which they did with ease as the Argentinean brothers fell to the back of the fleet finishing tenth.

In the 49erFX, Rio 2016 golden girls, Martine Grael and Kahena Kunze (BRA) have done it again as they claim another Medal Race and 2017 World Cup Series win. Backing up the gold they took in Miami, USA in Round One, the Brazilian girls were just too good for the fleet. 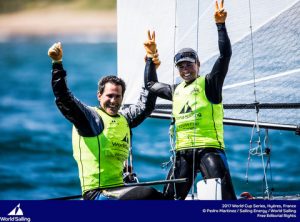 “We have nailed the year now with Miami and now Hyères,” said a smiling Grael, “but we have to keep our feet on the ground as we know there will be big competition ahead.”

One of those big competition’s is the Final in Santander, Spain this coming June. So, could it be a clean sweep? “It would be awesome,” said Grael, “let’s see what happens. The FX is a tough competition.”

Whatever Grael and Kunze can do, France’s Louis Giard can do too. Just like the Brazilian FX sailors, the French windsurfer has also added the Hyères title to the Round One Miami gold. 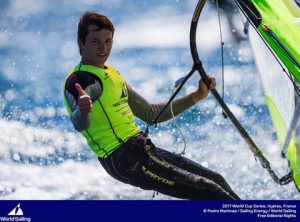 Despite a nervy start, Giard has slowly but surely climbed the ladder to the top of the podium racing better and better throughout the regatta, as he explains, “It’s another win for me after Miami. It wasn’t an easy week of racing and I had to improve my level throughout the week. I did that so I am happy.”

One sailor in the Men’s RS:X not happy is Mateo Sanz Lanz (SUI). While Giard started slow and gained confidence, Sanz Lanz seemingly did the opposite. With a tenth place finish in the double point Medal Race, Sanz Lanz missed out on the medals altogether allowing Piotr Myszka (POL) to take silver and Kiran Badloe (NED) to sneak in to take bronze.

Taking the Women’s RS:X gold was Poland’s Zofia Noceti-Klepacka. It has been a mixed bag of results from the Polish windsurfer, but in the end a string of high finishes throughout the week was enough to claim the title, “Today I enjoyed the racing. It was stable conditions and great planing. Compare that to yesterday when it was very hard. 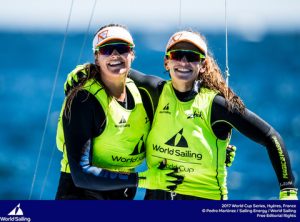 “Overall though I have sailed consistent. If you think I haven’t won a race but I have won gold. It was all about consistency.”

That consistency equated to a 23-point win over second placed Yunxiu Lu (CHN) who takes silver and a 32-point margin over third placed, and bronze medallist, Noga Geller (ISR).

If you are going to win a gold medal, you may as well win it with a first place in the Medal Race. That is what Fernando Echavarri and Tara Pacheco (ESP) did in the Nacra 17.

For the Spanish team it seems that Hyères has been a collection of puzzle pieces fitting to make one golden picture, as Echavarri explains, “It’s a good prize for a lot of things coming together. We are enjoying our sailing and have a solid base. We are putting everything we have learned in the last two years together and it is working well.”

French medal hopefuls Moana Vaireaux and Manon Audinet secured silver when they finished ahead of Lin Ea Cenholt and Christian Peter Lubeck (DEN). That meant the Danes had to settle for the bronze medal. 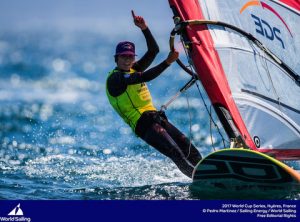 It would seem that the mechanical issue that kept Damien Seguin (FRA) out of day four action was well and truly fixed. The impressive Frenchman returned to action in style to claim all three bullets on offer and close out the 2.4 Norlin OD series.

Summing up the regatta Seguin said, “We had ten beautiful races, especially today with an east wind and big waves. I’m happy because I love this place.”

Seguin’s love has increased even more with a 17-point gap back to nearest rival Antonio Squizzato (ITA) in second. Xavier Dagault (FRA) claimed the bronze medal with 30 points.

If Seguin loves Hyères, just imagine how Nico Parlier (FRA) feels. The Frenchman has won all but one race in the Formula Foiling Kiteboarding, including the final three Medal Races.

Despite the dominance, Parlier still felt it was closer than the results suggest, “It’s been tough with really close racing. I’ve been really dialled in with my equipment though and had the wind I like so I am really happy with everything.” 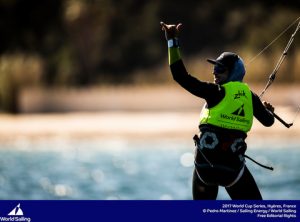 Parlier’s compatriot, training partner and friend, Axel Mazella (FRA), has always been one step behind, but still secured the silver with room to spare ahead of Monaco’s Maxime Nocher.

Australia’s Mat Belcher and Will Ryan will have a Hyères gold medal around their neck in the Men’s 470 no matter where they finish in the final Medal Race. With two bullets from two races, they opened up a 24-point lead to second placed Carl-Fredrik Fock and Marcus Dackhammar (SWE).

In the Women’s 470, Afrodite Zegers and Annaloes van Veen (NED) and Linda Fahrni and Maja Siegenthaler (SUI) have been neck and neck all week. Not anymore. The Dutch team took two bullets compared to a tenth and 11th from the Swiss. Zegers and van Veen now hold a 19-point advantage.

Six points separate the top two in the fight for Laser gold. Italy’s Francesco Marrai is the current leader on 53 points from a 2-9 day, bettering second placed Cypriot Pavlos Kontides who scored a 2-11. Australia’s Matt Wearn is in third.

Evi van Acker (BEL) has secured at least a silver medal ahead of the final Medal Race in the Laser Radial. Fighting the Belgian all the way will be second placed Tuula Tenkanen (FIN) who is 12 points behind.

Racing continues on Sunday 30 April at 12:05 local time as the final five Olympic classes race in the second and final day of Live Medal Races shown on the World Sailing YouTube Channel.