Top Posts
Don’t take chances where your health is concerned…
How Greek shipping can cut costs and improve...
GLOBAL & REGIONAL DAILY (Thursday 13 May, 2021)
RMT calls for action to protect seafarers’ mental...
Poseidonion Grand Hotel welcomes you back on May...
Large Diameter Drilling to partner with DEME Offshore...
Cyprus Ship Management Round Table Webinar and Debate
Lady Moura up for sale… plus more
Will the dollar decline? The changing landscape of...
TSUNEISHI SHIPBUILDING collects actual operation data by IoS-OP
Deltamarin is proud to be a part of...
Home HRBooks Metamorphoses of President Trump
BooksPolitics and GovernmentReports 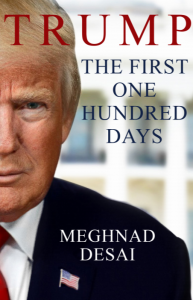 TRUMP: THE FIRST ONE HUNDRED DAYS – BY MEGHNAD DESAI WITH OMFIF PRESS

US president running into contradictions and dangers

Whatever may come of Donald Trump’s economic programme, it doesn’t seem likely to become reality any time soon. The new president, in office for 100 days on 29 April – offering what Steven Mnuchin, his Treasury secretary, has said will be the biggest tax cut in history – knows his favourite solutions on trade and taxes will create winners but also losers.  The president must reassure Republican budget hawks that the deficit will be manageable. He will need to master a political balancing act requiring skills  he has not yet been able to demonstrate.
That is one of the conclusions of a book by veteran academic and analyst Meghnad Desai and other authors, published by OMFIF Press, detailing the contradictions and controversies of the businessman-turned-president. In his multiple metamorphoses from mogul to party renegade, from campaigner to nominee, from election winner to head of state, Trump has spawned more colourful imagery than many of his predecessors generated in their full terms.
Desai and fellow writers dissect the Trump phenomenon across a broad range of economic and social policies. They consider, too, the complex array of foreign policy questions to which he is, somewhat reluctantly, having to pay attention.

Inability to repeal Obamacare signals danger. If Trump’s healthcare proposals stall, there is little hope of getting a trillion-dollar infrastructure plan approved.  Many of Trump’s top appointments are seasoned pragmatists now telling him the facts of life. Beijing is not a currency manipulator, he admits. The president has had good things to say about Federal Reserve Chair Janet Yellen, whom previously he seemed ready to reduce to lame duck status.

Trump’s greatest obstacle is his own Republican party, many of whom viscerally oppose his aims and methods. Yet when many voters (not just in the US) feel betrayed by the political class, Trump’s characteristic as the first president for 60 years with no experience of elective office may stand him in good stead. As a result of eight years of sub-standard growth, the economic ‘hollowing out’ of Middle America and a series of foreign policy reverses, electorates dislike and distrust insiders. The president’s economic policies, conventionally termed unconventional, may yet turn out to be a trump card.

The falling Markets are here to stay unless…