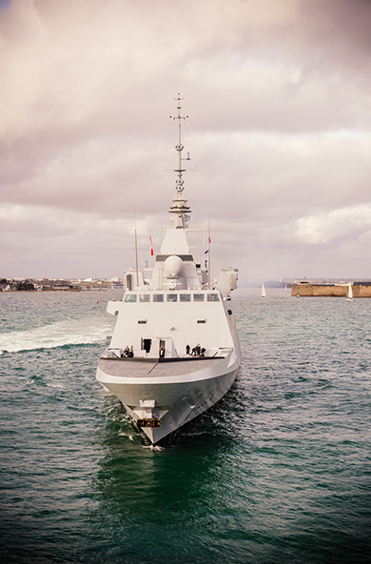 According to a DCNS press release, Auvergne is the sixth ship to be delivered out of a 10-ship FREMM program (four ships have now been delivered to the French Navy, and one each for the Egyptian and Moroccan navies). For the four remaining French ships, DCNS is currently completing the FREMM Bretagne, which was floated in September 2016, and is pursuing assembly of frigate Normandie. DCNS has started on the Alsace, which will be one of the two FREMMs with strengthened anti-aircraft capacities; deliveries are scheduled before 2022.

GE’s LM2500 gas turbine family includes the base LM2500 model (25 megawatts), LM2500+ (30 megawatts) and LM2500+G4 (35 megawatts) – a suite of engines to meet any mission profile*. These engines can be applied in a variety of propulsion configurations so naval architects have design flexibility.

GE’s marine gas turbine business is part of GE Aviation and is headquartered in Cincinnati, Ohio. GE is one of the world’s leading manufacturers of marine propulsion products, systems and solutions including aeroderivative gas turbines ranging from 6,000 to 70,275 shaft horsepower/4.5 to 52 megawatts. These gas turbines reliably operate the world over in some of the most arduous conditions in temperatures ranging from -40 to 120oF/-40 to 48oC. For more information, visit ge.com/marine.