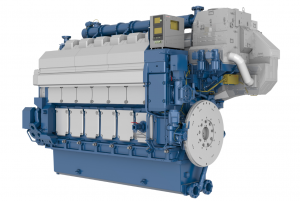 A 6-cylinder in-line Wärtsilä 34DF engine. The engine features advanced dual-fuel technology and high efficiency, and its success is evidenced with more than 300 engines delivered globally.

These are the first Category 3 Tier III certificates issued by the EPA to any manufacturer. Category 3 relates to engines with a displacement per cylinder of greater than 30 litres.

The certification verifies that the Wärtsilä 34DF engine is fully compliant with the EPA Tier III emission standards in gas mode operation. As required by the EPA Tier III standard, the engine is equipped with a continuous nitrogen oxide (NOx) measuring and monitoring system for verifying emissions compliancy inside NOx Emission Control Areas (NECA). When sailing outside NECAs, the fuel-flexible 34DF engine can be operated with conventional marine diesel fuels if required.

“Once again Wärtsilä technology is leading the way to greater environmental sustainability and a cleaner shipping industry. It is an honour for the company to be the first to be awarded this important EPA certification,” says Patrik Wägar, Product Director, Medium Bore Engines, Wärtsilä Marine Solutions.

The 34DF engine features advanced dual-fuel technology and high efficiency, and its success is evidenced with more than 300 engines delivered globally. For marine applications, it is manufactured in configurations from 6 to 16 cylinders covering a power range of 2880 – 8000kW.. Based on the well proven and reliable Wärtsilä 32 diesel engine introduced in the mid-1990s, the Wärtsilä 34DF’s fuel flexibility means that the engine can be optimised for constant speed generating sets, as well as variable speed mechanical drives for main engine applications