Awards for exceptional commitment and dedication to workplace health and safety 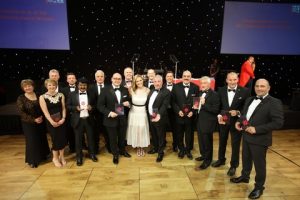 Lynda Armstrong OBE, Chair of Trustees, and Mike Robinson, Chief Executive of the British Safety Council, announced the names of the organisations which have been judged best in sector at the 2017 International Safety Awards Gala Dinner, held at London’s Grosvenor House Hotel on 5 May 2017.

Congratulating all the winners of the 2017 International Safety Awards, Lynda Armstrong said: “We are here tonight to celebrate the achievements of 535 winning organisations from across the globe, who have demonstrated to our panel of judges their commitment to keeping their employees healthy and safe. Our warmest congratulations to the award winning organisations and those shortlisted for the Sector and Champions Awards.

“Throughout its 60-year history, the British Safety Council has played a significant role in changing attitudes about the importance of managing risks, both at work and outside. Whether through our campaigns on seat belts, lobbying for a comprehensive legal framework for health and safety or the training of thousands of managers and workers, I don’t think it’s an exaggeration to say we have helped save thousands of lives.

“However, we would not have seen these improvements if over the years the businesses hadn’t stepped up to make a difference. Our awards have always been our chance to say thank you for their hard work and to recognise their commitment to keeping people healthy and safe.”

The Health and Safety Champion award went to Kieren McCafferty, Walker Construction, Kent, while the highly commended award in this category was presented to Stephen Wilkinson, Addison Lee, London.

The winner of the Young Health and Safety Champion award was Sophie Harwood, Waldeck Consulting, whilst the highly commended award was presented to Tom Arkley, Willmott Dixon Interiors Ltd

Those International Safety Award winning organisations that were considered by the panel of judges as outstanding in their respective sectors were honoured with the Sector Awards. This year, the Sector Awards went to the following companies:

In his closing remarks, Mike Robinson described the key new initiatives which the British Safety Council has launched in its 60th anniversary year. “We’re widening our sphere of influence, taking on the risks associated with today’s changing world. The British Safety Council has always been an international organisation and for over thirty years we‘ve been working in the Indian market. This year we’re taking our commitment to the next level by opening an office in Mumbai. India has its own space programme but it’s also a country where very high numbers of workers are killed or injured every year. We will be helping to address this disparity.

“I am also very proud that the British Safety Council, together with the Health in Construction Leadership Group, have launched Mates in Mind, a new charity that aims to improve the mental health of the 2.1 million construction workers in the UK. Addressing the link between work, mental health and wellbeing is the challenge for risk management in the 21st century. That is why the British Safety Council is clear that the construction sector is only the starting-point for this initiative not the end-point.

“The third area in which we have been embracing change is the digital world. The world in which we live today is very different to that of sixty years ago. We’ve been embracing these changes and I’m delighted to be able to showcase for the first time tonight our new website. We intend this to be the go-to digital home for everything you’ll ever need to know about health and safety. We’ll be using this new site as one of our main vehicles to educate, inform and drive public awareness. It has been developed in collaboration with our members and it will incorporate the digital tools and data which they told us they need.  Therefore, we are confident that it will enable us to increase our profile as a leading health, safety and environmental organisation, both in the UK and globally.”