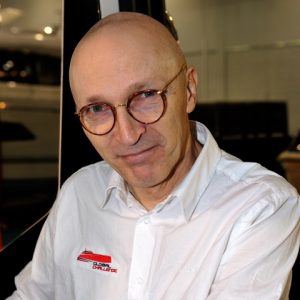 Award-winning travel journalist and photographer Clive Tully (64) is returning to the waves by joining the crew of Team Britannia, a new round-the-world record attempt.

The multiple world powerboat record-holder is part of the record attempt, which hopes to cut up to seven days off the current record of 60 days 23 hours 49 minutes, held by New Zealander Pete Bethune.

Team Britannia, led by British ocean racing legend Alan Priddy, will use a revolutionary semi-wave slicing boat, designed by Professor Bob Crips. The hull of the vessel will cut through the waves, rather than surfing them. This super-efficient design will reduce fuel consumption by up to 30 per cent and make the 23,000 nautical mile trip smoother and faster.

The boat will be crewed by a team of 12, including up to five wounded, injured and sick servicemen and women (WIS) on each of the seven legs of the voyage who are being supported by the top veterans charity Blesma.

Mr Priddy commented: “Clive and I are renewing a dream born in our ‘Spirit of Cardiff’ record attempt in 2002 which was thwarted by a medical emergency. We are in a better position than ever to put this unfinished business to bed and I am delighted to be reunited with Clive as we aim to make history.”

Clive added: “It would be an understatement to say that I am relishing the opportunity of putting Team Britannia in the history books and returning this prestigious world record back to British shores. The ‘Spirit of Cardiff’ adventure in 2002 may have broken 33 world records, but, as Alan says, there remains unfinished business and along with our exceptional team, this is the best opportunity we have to make history. ”

Clive, who comes from Norwich, joins Hampshire based Team Britannia as the Communications Officer and on board reporter, or OBR.

An award-winning travel journalist and photographer, he accompanied Alan Priddy on all of the world record attempts on board the powerboat ‘Spirit of Cardiff’ from 1999-2003 and is the holder of 33 UIM (Union Internationale Motonautique) powerboating world records.

Clive is a Fellow of the Royal Geographical Society, Honorary Life Member of the British Guild of Travel Writers, member of the Outdoor Writers and Photographers Guild and member of Mensa.

In addition to the fuel-efficient design, the boat will use a pollution-cutting Water-in-Diesel (WiDE) fuel emulsion to power the two race-tuned Fiat Power Train C13 500, 6 cylinder engines. The boat is being built by the Aluminium Boatbuilding Company who are based near Portsmouth, and it will be fitted with the latest navigation and communications equipment from the British marine industry.

The record attempt will start in October 2017 using the iconic Europa Point in Gibraltar as its timing mark.

Mr Priddy concluded: “We are at a crucial and exciting point in the project. The boat is being built and is attracting significant attention from the media and other adventurers like Bear Grylls, who visited Hayling Island (near Portsmouth) recently to see the boat being built. He also got to meet some of the team, both shore-based and those who will take part in this epic challenge. Just like Bear we know that getting the right team together is crucial if we are to smash the current record and I am delighted to be reunited with Clive’s skills and experience.”

Fuel – Emulsified diesel (diesel, water and a unique emulsion developed by Clean Fuel and its partners)

Capers cannot define the market… nor a market