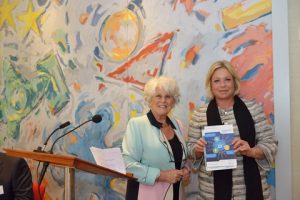 he Dutch Minister of Defence, Mrs Jeanine Hennis-Plasschaert (right), receives the report ‘The Navy and the Netherlands Maritime Cluster – an ecosystem under pressure’ from Mrs Karla Peijs (left).

Damen Shipyards Group supports the report ‘The Navy and the Netherlands Maritime Cluster – an ecosystem under pressure’, by PRC (Policy Research Corporation). The report calls for increased investment into the Dutch naval fleet via ‘Launching Customer’ projects. The report was presented to the Dutch Minister of Defence Jeanine Hennis-Plasschaert during a meeting of the Confederation of Netherlands Industry and Employers. It was jointly commissioned by Dutch maritime network associations Maritime by Holland and Netherlands Maritime Technology, together with the Dutch Foundation of Defence and Security Industry.

Dating back to 1879, Damen’s relationship with the Royal Netherlands Navy (RNLN) is well established. Over the last fifty years, Damen has developed and built eight generations of naval combatant vessels for the RNLN. These vessels – including air-defence frigates, amphibious platforms, logistic support ships and oceangoing patrol vessels – represent not only the close cooperation between Damen and the RNLN, but also the invaluable involvement of the entire Dutch maritime sector as well as the innovative input provided by numerous Dutch research institutes.

Furthermore, it is the collaborative efforts of this maritime cluster of companies and research institutes that enable the ongoing maintenance of the Dutch naval fleet. 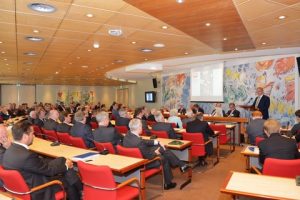 Meeting at the Confederation of Netherlands Industry and Employers (VNO-NCW) where the report ‘The Navy and the Netherlands Maritime Cluster – an ecosystem under pressure’ was presented.

The timing of the report is closely connected with projections showing that the existing RNLN fleet of multi-purpose frigates, mine countermeasure vessels and submarines will reach the end of their lifespans over the coming decade. The report also takes into account increasing global security issues and a committed contribution to NATO in the need to address future naval investment requirements.

The implications for the Dutch maritime cluster go beyond Damen and even the Netherlands’ own borders. On the one hand, increased government investment would uphold the RNLN’s position as a capable and resilient naval force. And on the other hand, greater investment would support the Dutch maritime industry as a whole, thus maintaining its strong standing in the global maritime industry.

“We are extremely proud of our strong relationship with the Royal Netherlands Navy – and it must be said that this has been made possible with the close cooperation and concerted efforts of the entire commercial maritime sector and associative research institutes here in the Netherlands,” comments Damen CEO René Berkvens.

“Sustained and innovative investment by our government in the Royal Netherlands Navy is of vital importance for the future state of the Dutch shipbuilding industry in general. And, in particular, those parties responsible for the development and construction of modern naval vessels. Damen wholeheartedly supports the initiatives laid down in this report.” 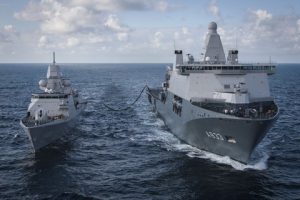 World-class innovation at sea: developed by a close collaboration between the Ministry of Defence, the RNLN, the Dutch naval shipbuilding industry and national maritime research institutes.

In addition to ship design and shipbuilding, Damen Shiprepair & Conversion has a worldwide network of 17 repair and conversion yards with dry docks ranging up to 420 x 80 metres. Conversion projects range from adapting vessels to today’s requirements and regulations to the complete conversion of large offshore structures. DSC completes around 1,350 repair and maintenance jobs annually.

Sailors’ Society supporters raise more than $280,000 (US) for seafarers in need

The time for ocean shippers to digitize is now, says INTTRA