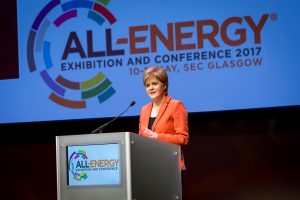 All-Energy, the UK’s largest annual renewable and low carbon energy exhibition and conference held in Glasgow on 10 and 11 May at the Scottish Event Campus (SEC, formerly SECC) certainly hit the proverbial spot in every way. It achieved its goal of over 7,000 attendees from home and overseas; hosted over 100 hours of conference and seminar sessions over the two days (including the stream for the new co-located event Smart Urban Mobility Solutions (SUMS 2017)); and attracted up to 400 exhibiting companies from 16 countries, and a packed Giant Networking Evening and Civic Reception held courtesy of the Rt Hon Lord Provost of Glasgow.

“We certainly got off to a flying start with a full auditorium for the opening plenary session which featured a keynote addresses by Scotland’s First Minister Nicola Sturgeon MSP, and from industry luminaries including Keith Anderson of ScottishPower and ScottishPower Renewables, Prof Jim Watson of UKERC and Julian Leslie of National Grid, under the watchful eye of the session chair, Strathclyde University’s Prof Sir Jim McDonald,” explains Event Director, Jonathan Heastie of organisers Reed Exhibitions. 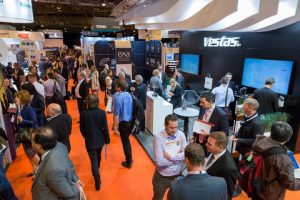 A view of the busy All-Energy exhibition

“The hall was packed, all 617 seats taken and a queue formed outside the door waiting to come in as others left. Nearly 50% of visitors attended at least one conference session, and all conference rooms were very busy. This year saw an increasing number of panel discussions and the introduction of the Atlantis Resources’ sponsored All-Energy Marine Renewable Energy Investment Challenge which saw one company – Tidetec of Norway – walk away with £10,000-worth of professional advice to help them find funding and successfully reach commercial status for their tidal lagoon ‘two-way hydropower’ technology.

“There was a splendid buzz in the exhibition as well as in the conference sessions (10 streams on Day 1 and nine on Day 2 in addition to two quick fire show-floor seminar theatres on both days); associated events too were well attended,” he adds.  “Many at the event spoke of the high quality of attendees.  Our total attendance over the two days was 7,570, but almost more important than the figure is the opinions expressed by visitors, speakers, exhibitors and supporters.

“Our conference team has been asking their 400+ speakers and chairs for feedback based on the fact that it helps determine the way forward, and just a handful of direct quotes from emails tell the tale:

Jonathan Heastie adds: “In a review one of our exhibiting companies, Innasol, summed up the show splendidly, writing: ‘We have just returned from our first time exhibiting at All-Energy at the SEC in Glasgow and it was a successful show for us. We certainly understand what all the hype is about now – it is not surprising why All-Energy is the UK’s largest renewable energy event in the UK. It was so refreshing to see a b2b show for our market with so much competition….. It certainly felt like the renewable industry in particular was positive and eager for the future.’

“And in a survey conducted with visitors during the show we learned:

“Feedback is invaluable for planning next year’s All-Energy and our newly launched Smart Urban Mobility Solutions conference stream, which again played to very full houses and a commitment from speakers and supporting organisations who would like to be involved in 2018. The SUMS stream was complemented by 19 low carbon vehicles in the exhibition hall including two that will be driven by students in the annual Shell Eco-marathon Europe in London at the end of this month.”

All-Energy and SUMS 2018 will be held at SEC, Glasgow on Wednesday 2 and Thursday 3 May 2018.  In the meantime conference presentations will be online by the end of May. Nicola Sturgeon’s full speech can be found athttps://news.gov.scot/speeches-and-briefings/scotlands-energy-future-1

Shepherd and Wedderburn was the Headline Sponsor of both events. All-Energy is held in association with the Renewable Energy Association, Scottish Enterprise, Highlands and Islands Enterprise, AREG and Host City Glasgow. A further 40 organisations including government departments, professional bodies and trade associations act as supporters of the two-day annual event. SUMS was held with Transport Scotland, ITS United Kingdom, the Energy Saving Trust, Glasgow City Council and Glasgow Chamber of Commerce as its supporting organisations.

Further information on the 2018 event will be online at www.all-energy.co.uk and www.smarturbanmobilitysolutions.comlater in the summer.