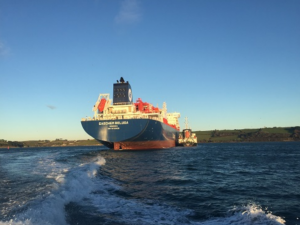 The world’s first ME-GIE (-Gas Injection Ethane) two-stroke engine has successfully passed gas trials on board the ‘Gaschem Beluga’, an LEG (liquefied ethylene gas) carrier, while sailing between Houston and the Bahamas.

The Mitsui-MAN B&W 7G50ME-C9.5-GIE unit is the first in a series of two engines acting as main propulsion for two such LEG carriers of 36,000 m3 ordered by Hartmann Reederei of Germany and Ocean Yield of Norway, and constructed at Sinopacific Offshore Engineering (SOE) in China.

MAN Diesel & Turbo personnel monitored proceedings aboard the vessel and reported successful operation on ethane with the ME-GIE responding as expected to different loads. No gas leaks were observed while ethane levels in the double-walled piping were constant and comfortably under the gas’s LEL (Lower Explosive Limit).

The Gaschem Beluga subsequently crossed the Atlantic on its way to Europe, powered solely by ethane, and has already achieved a total of 550 operational hours. 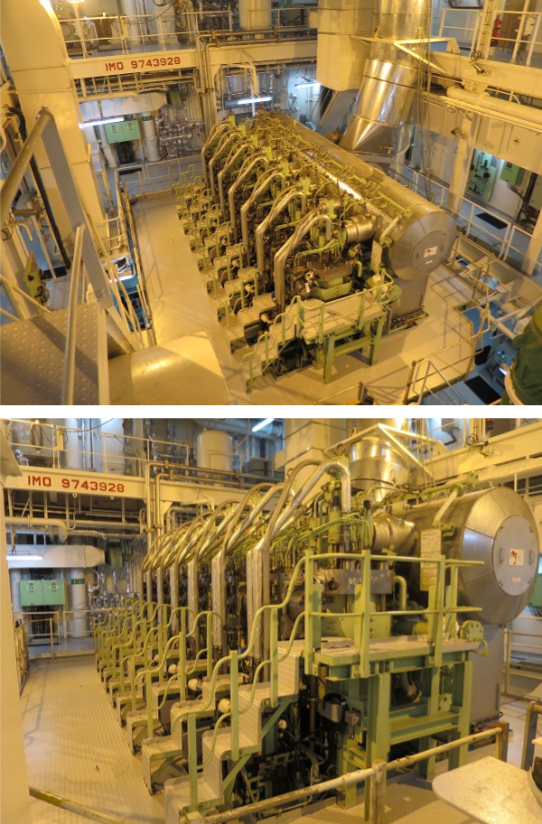 Alternative views of the 7G50ME-C9.5-GIE engine aboard the Gaschem Beluga

Capt. Ulrich Adami, Fleet Manager of Hartmann Reederei, said: “Developing and finalizing this type of vessel was hard work for the whole team and the process took several years. Therefore, we already knew that GasChem Beluga is a very good ship with a pioneering technology. But there is always a difference between a plan and its successful implementation. We are proud that we achieved the expected results entirely.”

While the engine is primarily designed for the combustion of ethane gas, our research shows that it is also possible to operate the engine on other gas types. This development is particularly exciting as it opens the prospect for multi-fuel combustion, including the combustion of methane, waste gas, and volatile organic compounds (VOCs).” 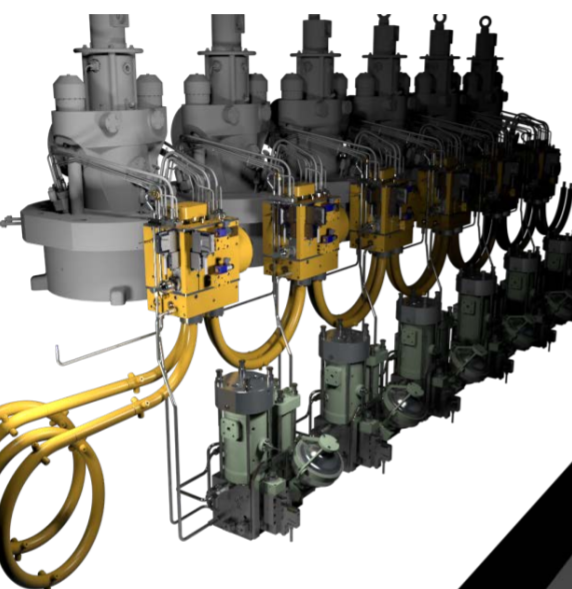 The engine top section of a 6-cylinder ME-GIE engine

The Gaschem Beluga is equipped with a propulsion package supplied by MAN Diesel & Turbo, Frederikshavn (Denmark). It includes a remote control system AT3000, a VBS 1350 – ODS Mk5 CP Propeller, and a shaft generator with frequency converter that enables it to run on variable speed between 80 to 100rpm.

The benefits of the ME-GIE’s Diesel-type combustion can now be fully exploited by its ability to operate on almost any gas quality – without any reduction in efficiency – and through a complete combustion maintained by a relatively high gas-injection pressure.

The engine will be able to run on a mixture of LPG and methane, or ethane, with an unchanged gas-mode efficiency. Such a mixture may comprise as much as 50% LPG, while MAN Diesel & Turbo’s findings thus far indicate that an even greater LPG percentage can be used.

MAN Diesel & Turbo sees significant opportunities in the development of the ME-GIE as the engine can also run on almost any form of waste gas. Such gases could be the light hydrocarbons or VOCs emitted from crude oil during storage and during the loading/unloading of crude oil. This opens the door for
new applications for the engine in, for example, shuttle tankers, for power generation in remote power plants, or in off-shore applications – such as floating production storage and offloading vessels (FPSOs) – where VOC is abundant and poses a potential environmental hazard.

While MAN B&W ME-GI engines have been designed for use by methane, operation on ethane is a new development. After methane, ethane is the second-largest component of natural gas with a content that varies from < 1% to > 6% by volume. However, before natural gas can be used as a commercial fuel, it must be processed to remove impurities, including ethane. Like many hydrocarbons, ethane is isolated on an industrial scale from natural gas, usually by liquefaction at cryogenic temperatures. Its chief use is within
ethylene production.

MAN Diesel & Turbo reports that ethane was chosen as fuel for the LEG carriers, in preference to HFO, due to its more competitive pricing. As a fuel, its emissions profile is similar to methane and contains negligible sulphur and comparatively lower CO2.

The engine can be delivered in the 5-90 MW power range.

The ME-GIE’s technology is based on that of MAN Diesel & Turbo’s successful ME-GI (-Gas Injection) engine that, with over 200 engines ordered, has set a new industrial standard for two-stroke propulsion engines aboard LNG carriers and container vessels. The ME-GI engine provides ship-owners
and operators with a peerless solution within environmentally friendly and high-efficiency, two-stroke technology.

With the ME-GI engine, two-stroke development has taken a step further by combining the unique properties of multi-fuel combustion and the well-known reliability of Man Diesel & Turbo’s ME-engine. The Diesel principle provides the ME-GI engine with high operational stability and efficiency, including
during load changes and fuel change-over, while defining properties such as a stable change-over from fuel to gas with no fuel-penalties are maintained. The negligible fuel slip of the ME-GI engine makes it the most environmentally friendly, two-stroke technology available.

About Hartmann
Hartmann Schiffahrt is a ship-management company based in the northern German city of Leer. Founded in 1981, it manages the technical and economic aspects of its own and other fleets with a focus on the gas and container segments and is a world leader within the gas-tanker segment. The company is part of Hartmann AG that has diverse interests in the maritime transport and logistics sector such as dry bulk, product tankers, multi-purpose vessels and OSVs.