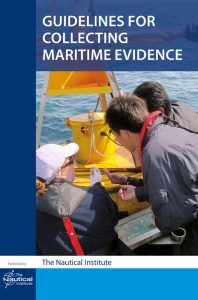 A short blurb on the book by the technical editor John Noble FNI:

I was asked to take on the task of producing a book that would reflect the roles of evidence collection in a broader context within the maritime industry.  From my own experience in dealing with casualties, plus many Court and arbitration attendances, I am aware of the many interests who become involved in collecting and using evidence following a maritime incident.

The Nautical Institute is widely recognised as a leading resource in maritime learning, as evidenced by the range of publications produced. The “Guidelines for Collecting Maritime Evidence” book joins a stable of thoroughbreds.  There are contributions from a wide range of individuals and organisations who are required to collect or use evidence in their daily work.  Evidence following an incident can be used in many ways for example: Lessons to be learned; Criminal Prosecution; Liability (who pays) issues and dispute resolution.  The contributors in this publication have given of their time and expertise to produce what I believe is a valuable digest of  by whom, where and how maritime evidence is collected.  The in-depth experience of the individual chapter authors is reflected in their contributions.

Finally, I acknowledge there are still areas to be covered such as collection of electronic evidence, metallurgy, classification, food sciences, micro-biology and fire; but a start has been made with this edition.

The BDI@956 struggles to survive; Geopolitics too…