Top Posts
Don’t take chances where your health is concerned…
What a week that was: Falling Markets, Warring...
New Hapag-Lloyd East Africa service arriving in Kenya...
American Club member Alert (May 14, 2021) –...
Hot Port News from GAC
Alternative events for Paris 2024 approved by World...
Daphne Technology seeks financing through crowdfunding platform
PRIME’S DAILY MARKET REPORT MAY 14, 2021
GLOBAL & REGIONAL DAILY (Friday 14 May, 2021)
Seaboard Energy has chosen Topsoe’s HydroFlex™ technology to...
Inflation surges in the US, but ECB may...
Home NewsEvents Monument to the Genocide of the Greeks of Pontus Unveiled in Piraeus.
EventsPaintings and Sculpture

Monument to the Genocide of the Greeks of Pontus Unveiled in Piraeus. 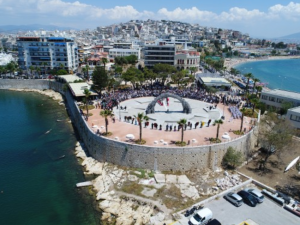 An aerial view of the Pontian Monument at Alexandra square

Both the construction of the Monument and the total refurbishment of the historic, 7-acre Alexandra square, with unrestricted sea views, close to the ancient walls of the city of Piraeus in Passalimani, have been made possible thanks to a donation from the Chairman of Capital Maritime & Trading Corp, President of Olympiakos FC and the first city councillor, Evangelos Marinakis.
The ceremony was part of the wider Memorial events organized by the Region of Attica and the Pan-Pontian Federation of Greece to mark the Day of the Genocide. For the first time in its history, Piraeus, the port that received the surviving refugees from Pontus, the largest port in Greece and one of the largest in the Mediterranean, was the focal point of the annual Memorial events.
The event today was attended by a great number of civic, religious and military leaders from across Greece, reflecting its great significance in national life.
The ceremony started with the arrival of a liturgical procession of the sacred icon of the Virgin Mary of Sumela which, according to tradition, was iconographed by Luke the Evangelist and is a symbol of Pontiac Hellenism. Then, Archbishop Seraphim of Piraeus delivered a memorial service for the victims of the genocide.
The Monument, created by Panayiotis Tanimanidis, is a tribute to the memory of the 353,000 Greeks of Pontus, who perished during the Genocide of the Hellenism of Pontus, perpetrated by the Turkish government of the time.
As such, the genocide of the Greeks of Pontus is a lesser known atrocity carried out by the ‘Young Turk’ Government between 1914 and 1926. It was committed alongside the Armenian and Assyrian genocides, which cost the life of millions of people overall.  An estimated 353,000 Greeks perished as a result of the genocide.
The monumental three-dimensional sculpture, 15.50 m long and 7.10 m high, is made of stainless steel and has brass details. It is a contemporary work of art, presenting an imposing arch called “Pyrrhic Flight”. Outwardly, it resembles a huge wave that rises from one homeland, from Pontus, to the other, with everything, memories, traditions, imprints of the ancient presence of the Greeks in Pontus.
Inside, the work is adorned with 17 sculptural compositions, successive icons depicting the flight of a “refugee bird” fleeing from Pontus to reach an unprepared homeland that sheltered the refugees’ dreams.
The construction of the project and the redevelopment of Alexandras Square were carried out at the initiative of Mr Marinakis, who is connected with Pontus through ties of family. His mother, Irene Karakatsani, is a descendant of the well-known Ypsilantis family, whose ancestors played a central role in the 1821 war of Greek liberation.
Speaking at the ceremony to unveil the Monument, Evangelos Marinakis said:
“Allow me to say that today is a special day for me. Through my mother, Irene, I am honored to be a descendent of the Ypsilantis family … The completion of this Monument is, at the same time, a fulfilment of my personal duty to the history of the Greeks of Pontus, to the history of my ancestors, and to the future generations of this country, to the young children who must not forget… This monument here, in the heart of Piraeus, will remind Greeks and foreigners arriving in Piraeus of the tragedy of the Pontian genocide, but also of their tradition and history that still holds them together united and, in spite of the hardships, still inspires them to excellence”.
*Alexandra square is situated between the ancient Zea and Munichia (contemporary Passalimani and Microlimano) harbors, where Themistocles built in the 4th century B.C. the Athenian fleet that stopped the Persian invasion of Greece in the battles of Marathon and Salamis.
Alexandra SquareEvangelos M. MarinakisGreecePiraeusPontian GreeksPontus
0 comment
0
FacebookTwitterLinkedinEmail